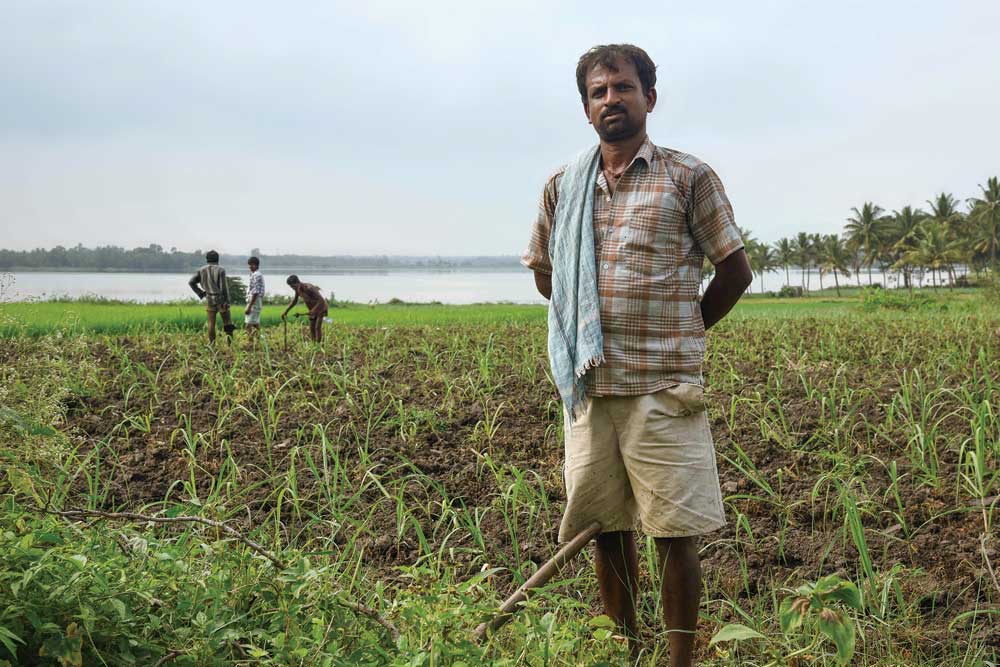 A CENTURY AGO, Mandya did not evoke visions of lush paddy fields and ubiquitous cane. In fact, before the 8,600-ft-long Krishna Raja Sagara (KRS) dam was built across the Cauvery in 1924, many Mandya farmers abandoned their ragi and tur dal crops to find work in such places as the tea plantations of Ooty. Even now, there is some migration from the unirrigated regions of Nagamangala in the northwestern part of the district to Bangalore and Mumbai. Water reconstructed the fate of Mandya and the Cauvery became the keeper of its dreams, swiftly transforming the socio-economic landscape and bringing in a steady trickle of wealth in the form of lucrative sugarcane yields. Today, the district stares at the ungraspable reality of drought, debt and crop losses as thousands of farmers walk the creases of their shrivelling lands in the wake of reduced water supply from the KRS reservoir.

With the Supreme Court directing the Siddaramaiah government in Karnataka this week to release 6,000 cusecs of Cauvery water to Tamil Nadu every day till 30 September—ignoring a Karnataka Assembly resolution which said that the state cannot spare any more water—Mandya, the epicentre of farmers’ protests against water sharing, and the suicide capital of rural Karnataka, finds itself in a state of existential unease. Its identity as the state’s sugar bowl is fading, year after depleted year, and the area under cultivation, about 200,000 hectares, is shrinking rapidly. In Gejjalagere, a village that refuses to pay its electricity bills in protest, debt-ridden farmers say they no longer feel in control of their lives. “Most of us have accumulated debts of Rs 1 lakh or more per acre. When a farmer is unable to pay back, he is humiliated by cooperative banks and threatened by money lenders. They stick notices on our homes and go around the village beating a drum to shame us. Farmers have lost the respect of the entire nation,” says GS Lingappaji, zila pradhan of the Karnataka Rajya Raitha Sangha (KRRS), a farmers’ movement.

Rising costs of cultivation, frequent crop failure due to low rainfall in the primary catchment area of Kodagu, and inordinately late payments from sugar factories are responsible for their mounting debt burden. With few other sources of income—a couple of garment factories that employ several thousand women, animal husbandry and silkworm rearing—they have grown sceptical of the glocalised economy. Many homes have a small kitchen garden and a cow or two to provide everyday necessities they can no longer afford to buy.

Had we anticipated the Supreme Court judgment, we’d have sown ragi. The government warned us too late

Lingappaji sowed an acre and a half of sugarcane in July, only to watch it wither. The government’s warnings of a failed monsoon came too late for him, as for most other farmers in Mandya. “Sugarcane used to be an easy cash crop. It requires a bit of investment but little maintenance. All it needs is water,” he says. A guava tree in front of his house is fruiting vigorously and schoolchildren stop by on their way home for some of the tart fruit. The scene seems far removed from the receding reality in Mandya. “We are attached to the life we have made here. With enough water, we can each employ four people under us,” Lingappaji says.

The struggle for water is in fact a struggle for dignity. The KRRS is protesting on the day of our visit, 26 September, in Maddur, a town 20 km from Mandya known for its eponymous crisp vadas. Over 50 farmers in white, with green towels thrown over their shoulders, sit cross-legged in front of the taluk office building and raise slogans decrying the ‘injustice’ meted out to them. Large, rusted vats seized from river sand miners lie in a heap nearby. Someone jokes that their farming equipment, too, is gathering rust. There have been over 135 suicides in Mandya in the past year, most of them farmers who dug their own grave with the twin spades of debt and disappointment. Bad times have wiped clean small fortunes built over several decades. Homes, jewels and land have been mortgaged. Many have turned to small-time money lenders who ask no questions and micro-finance institutions (MFI) that don’t require collateral.

Planting an acre of sugarcane entails an investment of Rs 30,000- Rs 40,000, which is borrowed from a nationalised bank, a cooperative bank, an MFI or a money-lender, in that order of preference. With subsequent crop failures, farmers have defaulted on several loans and banks are loath to lend them any more money. Among the private lenders, MFIs that lend to self-help groups (SHGs) are the least damaging. As early as 9.30 in the morning, a service centre in Gejjalagere operated by the Sri Kshetra Dharmasthala Rural Development Project, an MFI under the Dharmasthala Temple, is swarming with women of various ages. For the past three-four years, debt has become a perpetual contour of their lives, etched like fine lines on a weathered face. The microfinance project lends only to SHGs of 10-12 women, each vouching for the others and ensuring there are few defaults. Soon after forming groups—named after the gods of their choice: Netravati, Sarathi, Veerabhadreshwara, Kalabhairava—the women can each borrow Rs 10,000 for a year, paying a few hundred rupees in interest and principal every week. Once the debt is repaid, they become eligible to borrow bigger sums up to Rs 50,000—the interest falling between 17 and 30 per cent—anything beyond that requires collateral.

Monday is collection day at this service centre and women from the 39 groups—there are over 15,000 in all in Mandya district— in Gejjalagere are gathered here with fistfuls of cash. “In our four years here, there has never been a default. One woman died, but insurance took care of her outstanding balance,” says Nalina BC, the overweening lending representative. She urges one group to avail more loans, but the women seem reluctant. They know paying back won’t be easy. “It is God’s money and it helps us tide over shortfalls and run the family. To make the weekly payments, though, we have to work in the fields for daily wages,” says S Sumathi, who borrowed Rs 45,000 last year to buy a cow and pay for her 11-year-old daughter Keerthana’s studies. Her husband, K Shivalingaiah, is already indebted to several banks and lenders, and his acre-and-a-half of sugarcane is fast drying up. Sumathi’s life is only getting harder with each passing year: she now works in the fields, grazes their two cows, cooks and cleans for the family, delivers lunch to her husband and makes sure her daughter wants for nothing. In a good monsoon year, the family can make Rs 35,000-40,000. “Even if we have five consecutive years of good rain, we won’t be rid of our debt,” she says.

There have been over 135 suicides in Mandya in one year, mostly of farmers who dug their own grave with the twin spades of debt and disappointment

ON THE OUTSKIRTS of Maddur, a lake known simply as Maddur Kere gleams in the sun even as several paddy and cane fields around it are on the verge of wilting. VR Suresh, working with three others to deweed his uncle’s 1.5 acre sugarcane farm, says the lake will dry up in a few weeks. “Had we anticipated the Supreme Court judgment, we would have sown ragi,” he says. He may give up sugarcane farming entirely, he says. “Of late, it has been like gambling. There is no way this can go on.”

Other than the KRS, no reservoir in the Cauvery basin in Karnataka can support sugarcane cultivation on a big scale, says KC Basavaraju, a professor of Economics at the University of Mysore. “With the availability of water, sugarcane became a prestige crop in the Cauvery basin. Farmers switched from the labour-intensive paddy crop to cane and cannot imagine going back because labour is very scarce now,” he says.

Karnataka has over 60 sugar factories that can process about 50 million tonnes of sugarcane in a season. Of these, Mandya has five, and two of them are not functioning this year due to lack of raw material and low sugar recovery rates using the old machinery. Cane production in the state was 40.4 million tonnes in 2013-14 and 30.6 million tonnes last year, but it may miss the 30-million- tonne mark this time. NSL Sugars Ltd in Koppa, a large private factory that processed 970,000 tonnes in 2015-16 and 1.8 million tonnes in 2014-15, says it expects to do less than 700,000 tonnes this year. “This is a cyclical industry, but this year is worse than any in the past decade,” says MR Managoli, cane advisor at NSL Sugars. “We are sourcing cane from areas that usually fall under the Pandavapura Sahakari Sakkare Karkhane and the Mysore Sugar Company Ltd factory, both of which are not running this year.”

Unlike Tamil Nadu, Uttar Pradesh, Haryana and a few other sugar-producing states, Karnataka does not have a State Advised Price (SAP) for cane. The Fair and Remunerative Price (FRP) in the state this year is the same as last year’s, that is, Rs 2,300 per tonne. It doesn’t help that the five factories in Mandya have been at loggerheads with sugarcane producers over non-payment of dues—to the tune of Rs 230 crore—which, farmers say, is the reason they have had to default on their loans. “We have not been paid for two years,” alleges Lingappaji. As per the Karnataka Sugarcane (Regulation of Purchase and Supply) Act, 2013, factories must clear dues within 14 days of procurement of the cane. Factories, in turn, blame farmers for directing raw material to smaller jaggery production units to take advantage of the rising demand for jaggery. But with sugar prices, too, rising, the mills are arguably in a better position to pay farmers.

Like paint without a canvas, the farmers of Mandya are struggling to feel at home in a shape-shifting landscape. But when it rains and there are puddles in the fields, they can see in them a flicker of their plentiful past.