The Orator and His Perfect Flourish 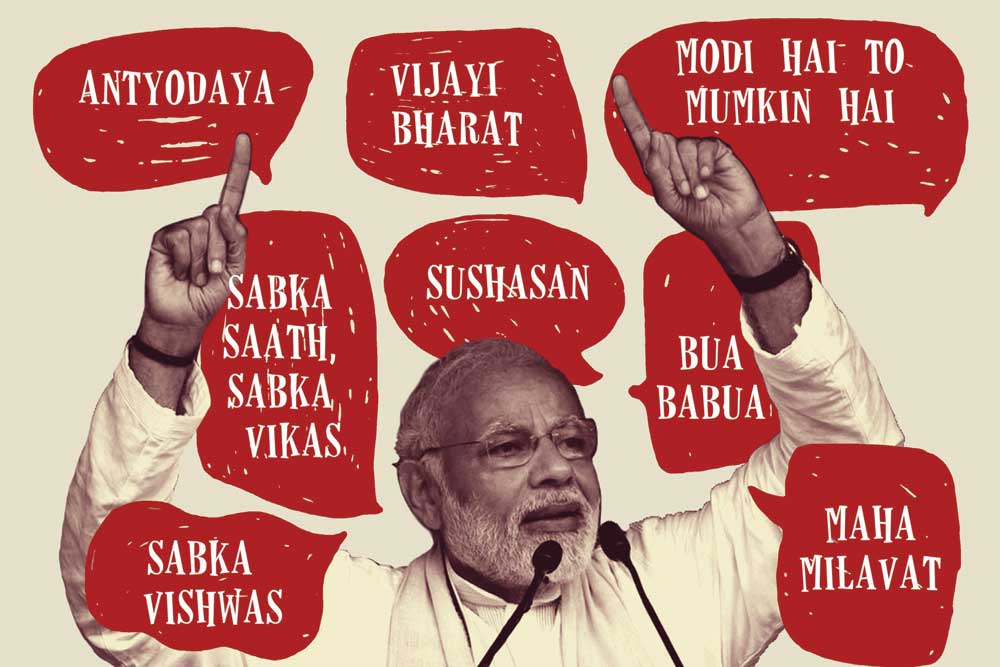 IN THE OSCAR-WINNING Darkest Hour (2017), just as Winston Churchill ends his famous Dunkirk speech in the British Parliament, applause erupts and someone asks: ‘What just happened?’ ‘He mobilised the English language and sent it into battle,’ replies another.

Words may well have won Prime Minister Narendra Modi a second term. Well-thought-out binaries, catchy acronyms, popular colloquialisms and conversion of epithets into emblematic descriptions were all part of Prime Minister Modi’s arsenal in the run-up to the 2019 General Election. Simple, with enormous emotional connect and repeated often enough to be remembered, Prime Minister Modi used them with elan. So the contest was between the naamdar (dynast) and kaamdar (meritocrat), between sapoot (good son) and saboot (proof), between India First and Parivar First, and between Hard Work and Harvard. The opposites drew the line between the Old India of Khan Market and Lutyens’ Delhi and the New India of Nationalists and NaMoists. The catchy acronyms brought in sarcasm and a touch of humour, whether it was ‘SARAB’ (liquor) for the Samajwadi Party, Rashtriya Janata Dal and Bahujan Samaj Party of the Mahagathbandhan, ‘OROP’ for ‘Only Rahul and Only Priyanka’ or ‘RSVP’ for ‘Rahul, Sonia, Vadra and Priyanka’. These were in line with his love for acronyms dating back to his days as chief minister of Gujarat. Colloquialisms such as bua-babua /bua-bhatija stemmed from the intensive research his team did at least a fortnight before his visit to any area to find issues of local connect. More than anything else, as in 2014, Prime Minister Modi was a master of wearing insults like a badge of honour. Take the ‘chaiwaala’ comment of Mani Shankar Aiyar and the ‘neech’ remark by Priyanka Gandhi of 2014 and the ‘chowkidar chor hai’ slogan adopted by Congress President Rahul Gandhi. By inverting all three, he subverted attempts to embarrass him.

In 2015, Prime Minister Modi had said at a Teachers’ Day function: “To be a good orator you need to be a good listener. You need to listen with your eyes and your mind.” That’ s exactly what he did, changing his communication to suit the mood of the nation: from muscular nationalism at his rallies (50 days, 140 rallies, 150,000 km) to appeal to the youth to the softer, more curated answers of his recent TV interviews, which humanised him, providing a glimpse of his kinder, gentler side; from writing poetry to eating mangoes to cooking khichdi. It was masterful communication acknowledged even by his worst critics, including Rahul Gandhi.

Nevertheless, as Sonia Gandhi said in 2018, Prime Minister Modi is a good orator but speeches cannot fill stomachs. This is something he knew very well. As a top source in his campaign said, Modi spent the last year travelling the country informing people about all that he had done for them. The focus was on the 220 million beneficiaries of schemes ranging from free gas connections under Ujjwala Yojana, toilets under Swachh Bharat, bank accounts under the Jan Dhan Yojana, affordable houses under the Awas Yojana to electrification under the Saubhagya Yojana and small loans for entrepreneurs under the Mudra Yojana. Through Modi’s speeches and Government advertisements with the tagline ‘Modi hai to mumkin hai’, the speed and scale of transformation was emphasised.

Well-thought- out binaries, catchy acronyms, popular colloquialisms and conversion of epithets into emblematic descriptions were all part of Prime Minister Modi’s arsenal in the run-up to the 2019 General Election. Simple, with enormous emotional connect and repeated often enough to be remembered, Prime Minister Modi used them with elan

In the last 45 days of actual campaigning, the attempt was to insist on fear: the fear of beneficiaries losing access to these schemes which in the minds of the people were identified so closely with Prime Minister Modi. As Indira Gandhi said so famously in 1971: ‘Woh kehte hain ‘Indira hatao’, main kehti hoon ‘garibi hatao’ [The opposition says ‘Banish Indira’, I say ‘Banish poverty’]. Hence the constant refrain from Modi of the ‘mahamilaawat’ (great adulteration) in the Mahagathbandhan and of the empty promise of Rs 72,000 annually for 20 per cent of the population under Congress’ Nyuntam Aay Yojana. All these were conspiring to remove him—the fakir, the Pradhan Sevak, the honest disciplinarian—from the scene, this was his subliminal message, because he wanted nothing for himself.

The delivery of governance to the poorest of the poor, which Modi emphasised when releasing the BJP manifesto (which he said revolved around antyodaya, sushaasan and raashtrawaad), added to the aura amplified by the Balakot air strikes. When the Prime Minister spoke of the air strikes he used the theatrical language popularised by the Bollywood blockbuster Uri: The Surgical Strike (2019): ‘Ghar mein ghuskar maara.’ He also personalised the war against Pakistan. It was not just India’s Army but his army, which was attacking the enemy. It was the same hope that India shared briefly when a young Rajiv Gandhi went to the US Congress in 1985 and echoed Martin Luther King’s famous words: “I am young and I too have a dream. I dream of India strong, independent, self- reliant and in the front rank of the nations of the world, in the service of mankind.”

Brand Modi became so strong across sectors that he overshadowed Brand BJP. He speaks of meeting an old woman who fought with those manning the polling booth in her village because she couldn’t find Modi’s photograph anywhere on the electronic voting machine. Incorruptibility, honesty, keeping of promises—these aspects have become inextricably linked with Modi, which was emphasised further when the Prime Minister visited Kedarnath after the campaign, as promised.

More than anything else, Modi succeeded because he was a better storyteller. As Tyrion Lannister, the Imp with the Silver Tongue, said in the last episode of Game of Thrones, ‘What unites people? Armies? Gold? Flags? Stories. There’s nothing more powerful in the world than a good story. Nothing can stop it. No enemy can defeat it.’

Prime Minister Modi, in his second term, has already established the goal for his party and country: sabka saath, sabka vikas and sabka vishwaas will create a vijayi Bharat, he says. The Age of Modi is upon us and its Great Communicator is already hard at work, planning the celebrations of 2022. India@75 will be the culmination, he hopes, of Making India Great Again, the Modi Way.