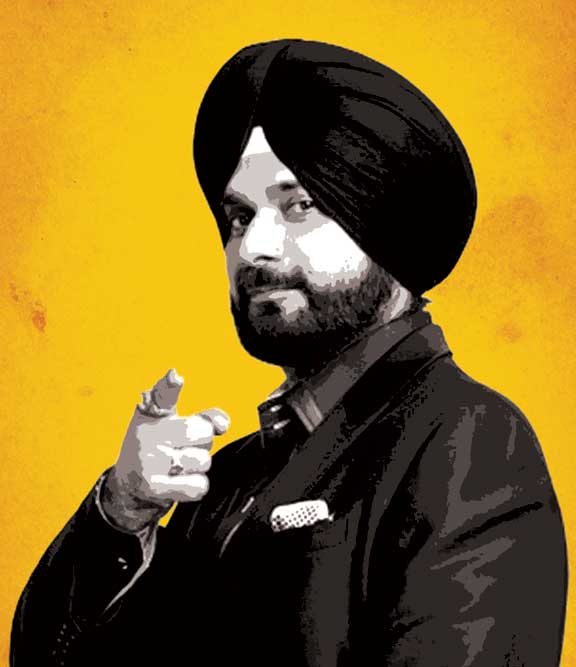 IT IS NOT in the Oxford Dictionary, but many would think ‘Sidhuism’ merits a place. Broadly, it is a ludicrous comparison delivered in a bombastic manner by one man, Navjot Singh Sidhu. Here is a sample from a blog that collects them: ‘You may have a heart of gold, but so does a hard- boiled egg’, ‘When you are dining with the demon you’ve got to have a long spoon!’. When Sidhu was a cricket commentator, these one-liners were as entertaining as the matches themselves. By the time he gave that mike up, Sidhuism had takers among Hindi entertainment channels and he found himself part of one of India’s most successful shows, Comedy Nights. His fame and yen for wit also contributed to a political career that got going simultaneously. After retiring from active cricket, Sidhu has never been short of hats in his life. Now, he seems to be getting ready for his biggest one yet.

On 18 July, Sidhu, nominated merely two-and-a-half months ago as a member of the Rajya Sabha, stood up in the House and read his resignation aloud in Punjabi. His party, the BJP, winced. Besides an MP seat, it had also just made him a member of Punjab’s BJP Core Committee. But it was apparently not enough. The Chief Minister’s chair was in sight. It was BJP patriarch LK Advani who had persuaded him to join politics. From 2004 to 2014, Sidhu had represented Amritsar in the Lok Sabha. It had not been thought an easy seat to win. Congress heavyweight Raghunandanlal Bhatia had done five terms as its MP when Sidhu first fought there and romped home by more than 100,000 votes.

Navjot Sidhu, a Jat Sikh, with a background that cuts across cricket, TV and politics, has the capacity to attract crowds

His disquiet within the BJP had its genesis in the 2014 Lok Sabha polls, when he had to make way for Arun Jaitley to contest there. Sidhu didn’t even campaign. Jaitley lost. There was also his vocal distaste for the BJP’s alliance with the Shiromani Akali Dal (SAD), especially for the Badal family. On his Rajya Sabha resignation, Sidhu said, ‘In the war of right or wrong you can’t afford to be neutral rather than being self-centered. Punjab’s interest is paramount.’ He was perhaps waiting for an opportune time to quit the BJP, and the upcoming state elections have provided it. According to sources, he had been in talks with Arvind Kejriwal’s Aam Aadmi Party for quite some time, and his move shows that an agreement has been reached over his leading AAP’s Punjab campaign. Sidhu’s wife Navjot Kaur, a BJP MLA, says, “He did obey every order by the party, but never compromised on fighting against the problem of drugs and corruption in Punjab. What did he get in return? He would be where he can continue to work for the right causes in the interests of the state.”

For AAP, Sidhu would be a prized catch. The party needs a popular figure to match the Badals of SAD or Amarinder Singh of the Congress. It is hard to see how he won’t be AAP’s chief ministerial candidate, even if the party does not confirm it. ‘One who doesn’t throw the dice can never expect to score a six,’ goes a Sidhuism. Next February, when Punjab goes to the polls, Sidhu will know whether he has scored a six or a hit-wicket.