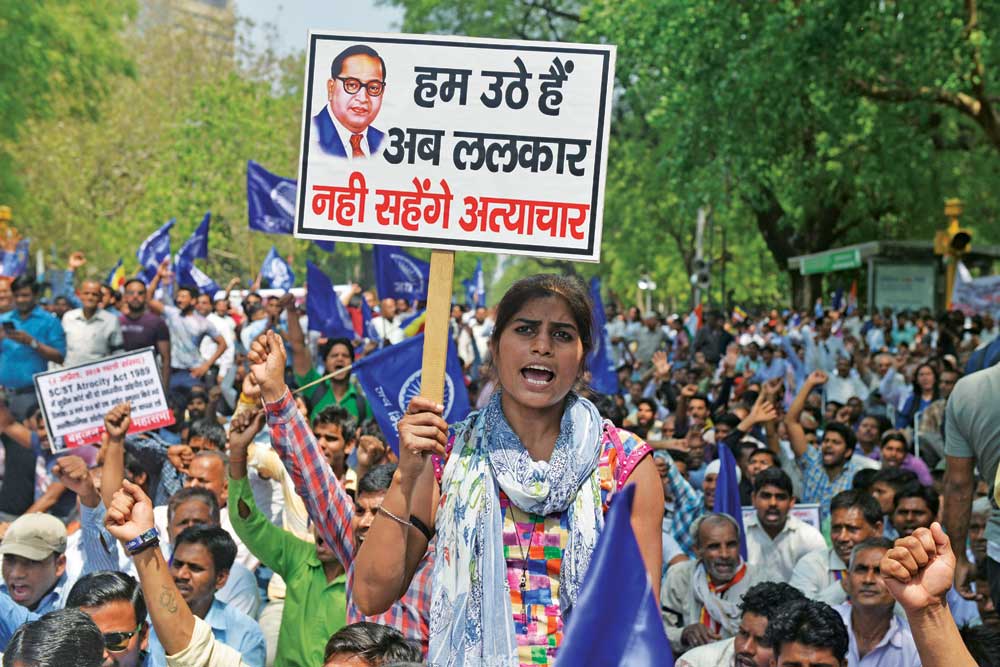 NATIONWIDE DALIT PROTESTS on April 2nd over the Supreme Court ‘diluting’ the SC/ST Prevention of Atrocities Act caught the Centre off guard, prompting senior leaders in the Government to rush to the apex court with an appeal to freeze its verdict. The Court turned down the Government’s plea to put on hold its March 20th order that introduced the provision of anticipatory bail in that law. The Supreme Court stuck to the view that the provisions of the SC/ST Act cannot be used to terrorise innocents , although it agreed to consider the Centre’s review petition against its judgment that it said was to prevent the misuse of certain provisions of the 1989 enactment.

That the Government swept into action only after Dalit protests threw life out of gear and resulted in the loss of at least 11 lives reveals its fear of a political backlash. In its petition to keep the court order in abeyance, the Centre spoke of an emergency situation in the country. ‘We have not diluted the law in any manner,’ said the court, declining to entertain the appeal.

Dalits, who account for 200 million of India’s 1.3 billion people, were ostensibly agitated about the court’s verdict banning automatic arrest unless it is a case for which the expected penalty is a jail term of over seven years. But their real target was the Government, which has consistently mismanaged Dalit defiance. State governments led by the BJP have also faltered in the face of such protests.

Senior BJP leaders such as Amit Shah may have broken bread with Dalit families in the run-up to various polls as a goodwill gesture to the community, but Dalit anger has been building up over the years thanks to a rise in crimes against them, especially by self-appointed custodians of the Hindu faith and upper-caste groups that form traditional vote banks of the BJP, coupled with a slide in conviction rates for anti-Dalit violations of the law. Though the RSS has been advocating and putting into practice measures to bring Dalits into its fold through myriad programmes, such tokenism is in stark contrast with ground reality. The rise in crimes against the community and widening caste inequalities in states such as UP, Madhya Pradesh, Bihar and Rajasthan, among others, have been rallying points for Dalit disaffection.

The Dalit unrest also stems from mounting aspirations among the community’s youth. Open dwelled at length on this political trend (‘What Powers Dalit Resurgence’, June 2nd, 2017). In fact, anti-Dalit attacks have been on the rise even in the years before the BJP came to power, soaring 19 per cent in 2014 compared with a year earlier and 17 per cent in 2013 over 2012. According to the latest data available with the National Crime Records Bureau, crimes recorded against Dalits rose to 47,064 in 2014 from 39,408 in 2013. In Gujarat alone, rapes of Dalit women went up 500 per cent from 2001 to 2014. Convictions in crimes committed under the SC/STs Prevention of Atrocities Act have fallen from 38.4 per cent in 2010 to 16.3 per cent in 2016; convictions in crimes of all kinds against these underprivileged groups have declined from 35 per cent in 2010 to 25.7 per cent in 2016. According to a 2016 survey published in a peer-reviewed journal, half of all non-Dalit Hindu males and 66 per cent of non-Dalit females in rural Rajasthan practise untouchability—a practice Mahatma Gandhi called a “crime against god and man”. In UP villages, 43 per cent of non-Dalit males and 64 per cent of non-Dalit females treat Dalits as untouchable, labelling them ‘impure’. Even in the commercial capital of Mumbai, the survey showed, 21 per cent of non-Dalit males practise untouchability. Professor Surinder S Jodhka, a sociologist who studies caste, says one of the reasons for the marked rise in violence against Dalits is the assertion by a section of them who are ready to stand up for all. “The new generation of Dalits who are mobile and educated don’t see any justification for the caste system,” he says, emphasising that “they are now extremely comfortable with their Dalitness”. Some of them—like Gujarat legislator Jignesh Mevani—have become new icons for the community.

All this has also given rise to a certain intolerance among upper-castes, many of who feel emboldened by the growth of Hindutva politics to discriminate against Dalits. Official statistics are startling: four Dalit women are raped every day; two Dalits are killed every day; every 18 minutes there is an atrocity committed against a Dalit; two or three Dalit homes are burnt down daily. Worse, in more than 90 per cent of the cases, the perpetrators simply walk away. A CSDS-Lokniti survey among various communities, including Muslims, OBCs, upper-castes and Dalits, found that a larger number of ‘graduate Dalits’ feel they are discriminated against than any other group in India.

The Supreme Court order of March 20th was only a spark. The crisis—fuelled by resistance and assertion—was waiting to flare up regardless.