Brexit has smashed up the EU, imperilled the UK and redefined the relationship between Parliament, the Constitution and the party system 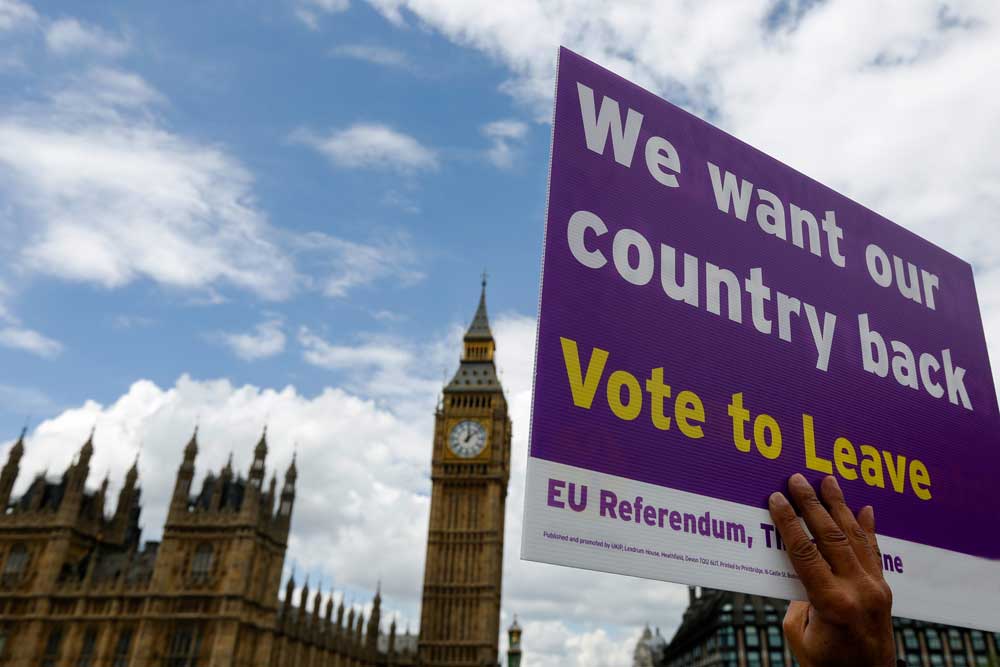 On the morning of 23 June Britain awoke to new life. The people spoke and liberty was reclaimed. Some said it was the greatest peacetime change in Britain’s history.

But the people didn’t really speak, they just mumbled a monosyllable, and whatever they wanted, we don’t yet know what they will get. The majority for ‘Leave’ ended up deciding not just an ‘advisory’ referendum but three additional contests too – a proxy general election, a plebiscite on immigration, and a struggle for the leadership of the Conservative Party. That one-word answer, chosen by 52 per cent of the voters, may well be about to transform the country in ways far beyond the boundaries of the question.

First, we have divided and confused our sovereignty as much as we have recovered it. We used to elect a House of Commons, which determined the government. Now we have a new system of double, ‘optional’ sovereignty, where either a referendum or a general election can change our government. And the elite get to choose which.

How so? The current Parliament is pro-Remain, but the people are against, and our Prime Minister has chosen to listen to the people. So much for Parliamentary supremacy. David Cameron authorized three referendums in five years – on the electoral system in 2011, on Scottish independence in 2014, and on EU membership in 2016. Each was designed to nobble a rival political party via its pet issue – the Liberal Democrats, the Scottish National Party and the United Kingdom Independence Party (UKIP) respectively. Take a rival, choose an issue, and jump out of the electoral cycle, that’s the new way. Cameron just did it once too often.

Next, we now have an officially measured majority in this country against immigration. This is a toxic discovery, and the political classes may yet rue the day. How will they satisfy the anxious people who voted against the global effects of the corporate search for cheap labour? What can any government do that wants to be friends with capitalists? Who will be brave enough to tell these fearful people that their children, not immigrants, must pick crops and clean up vomit in hospitals?

This 52 per cent majority is more left behind that Left, and its spokesperson is one Nigel Farage, leader of UKIP, a wealthy ex-City trader who has made a career out of speaking up for the common man, for small enterprises against the corporates, and for the little country against the European super-state.

Farage originally gathered an older, whiter, less educated following, but more recently he has attracted working class people who feel they have been deserted by their traditional representatives in the Labour Party, which has refused to oppose immigration on both ideological and pragmatic grounds. The UKIP has no such qualms, and has so effectively radicalized the lumpens with its amalgam of economic individualism and cultural chauvinism, that any sense of collective national interest has gone missing. As has ‘tribal’ party loyalty, with shire Tories and indigenous proles making common cause on the UKIP bandwagon.

Britain’s two major political parties are both now in crisis.

Labour cannot bring itself to condemn or restrict immigration, with the leadership split between modernizing, managerial Blairites and old-school ideological, internationalist lefties. Its move away from traditional working class issues was first evident in Scotland where it was outbid on the social agenda by the nationalists, leaving it with one MP there after the last election in 2015. In 2016 the north of England and Wales have rebelled too and defied the leadership.

The UKIP has been the chief beneficiary, but now that the UK is independent, why do we need them? Will Farage stand down and go home for a pint in his local (and a smoke in the car park)? No chance; expansion is the new mission. We have the makings here of a powerful new radical right-of-centre populist party – on a roll, buoyed up with huge personal loyalty to its leader. Watch this space; watch that name.

And the Tories? The whole referendum had its roots in a Tory civil war, so will peace come to the party now? Hardly. The two Posh Boys, Cameron and Osborne, have just rustled up the biggest Eton Mess of all time. Cameron has left the table, but Osborne is hanging on till the coffee is served. He is more likely to get a pearl-handled revolver.

The leaderless party now waits, divided on the succession, while Farage remains in the field, pledged to fight the ‘coalition of the comfortable’. So the Tories are pegged to the right of centre until further notice, as the economy stalls under the baneful effects of uncertainty. This means that the scope for appeasing the Brexit malcontents with public spending is restricted, while in any auction of anger the Tories will always be outbid by Farage, who does outrage very well.

‘Take Back Control’ was the winning slogan, but taking control of what, and from whom, was always the issue. Maybe we’ll now find out that we can’t control the world economy, the corporations, the climate, the Middle East or even our own people. Will ‘Out’ then prove any better than ‘In’ for anyone? Will the lovers of liberty, our latter-day village Hampdens, remain stoical if we as a nation end up poorer and less important in the world?

We have just had an unofficial general election conducted without parties or proper manifestos. Its outcome was swayed by a series of unexamined promises. It registered a revolt against austerity that has mandated a clique of eggheads even more committed to spending cuts. There is discontent and ambiguity in Scotland and Ireland, with calls for further votes to clarify our islands’ relationships.

So far, Brexit has smashed up the EU, imperilled the UK and redefined the relationship between Parliament, the constitution and the party system.