Text and Photographs by Ritesh Uttamchandani 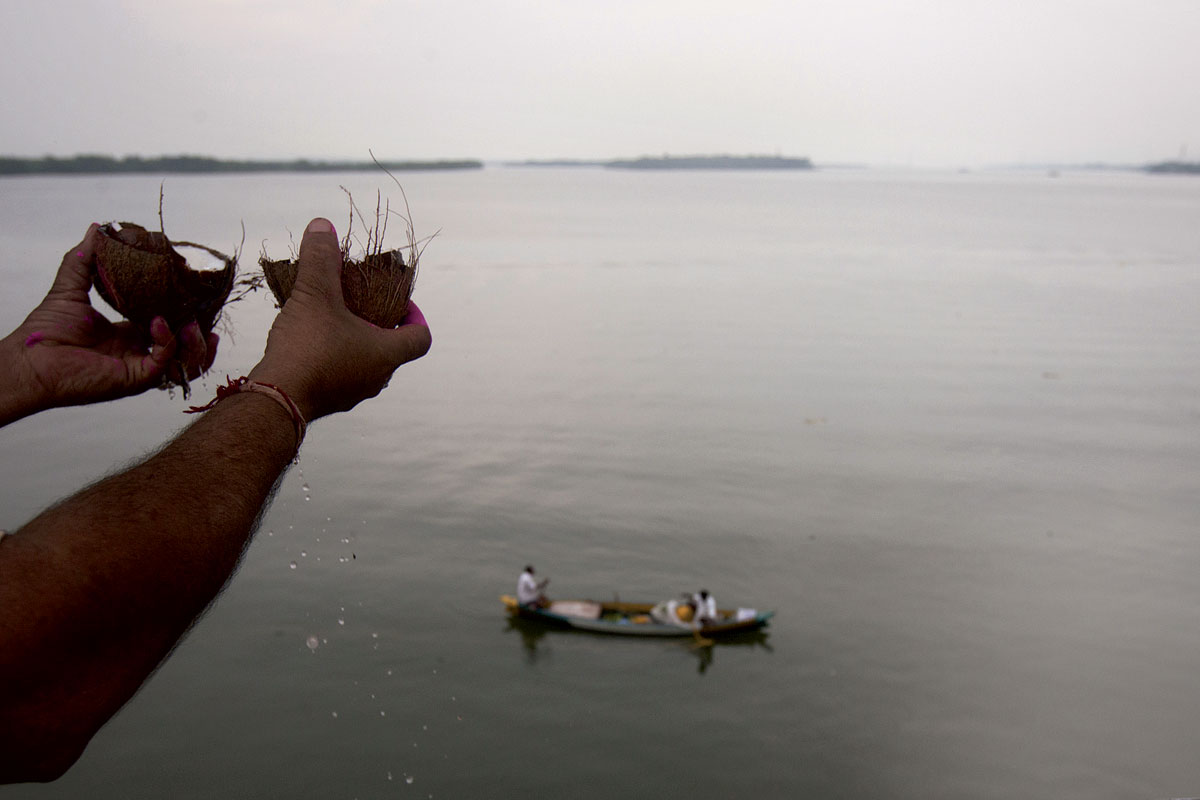 The bathroom of Room 207 at Hotel Garuda has four taps, three of which are leaking furiously when I check in. For a better part of the evening, the drummers of Vinayaka Chavithi (Ganesha Visarjan) manage to submerge the sound. With night comes the hiss and pitter-patter of high- speed water drops, keeping me awake. Before I leave in the morning for the Pattiseema project, I request the manager to fix the taps. He nods, and flings a confident ‘yes’ at my groggy face.

My first stop is Ibrahimpatnam, Andhra Pradesh, an hour away from Vijayawada, the physical point of confluence of the project that links the Godavari to the Krishna river. I imagine it to be something like the sangam of the Ganga and Yamuna in Allahabad, but I am greeted with shimmering empty pouches of water littered all across the banks and fake Rs 500 notes— remnants of a recent inaugural ceremony. A man is searching for coins while a dead common green snake rots nearby. That is all it takes for me to leave and make my way to the actual pumping site with a stop along the canal in Bhimadola.

Two kilometres away from the Pattiseema project, inside an air-conditioned cargo container, seated on office chairs whose plastic packaging resembles rags wearing thin on concrete slabs, Murali Pammi invites me to join him for lunch. He is an associate manager at Megha Engineering and Infrastructure Ltd, the contractor of the project. To wash my hands, he directs me to the next cargo container, home to the engineers on the project. ‘Hot’ is a small word to describe the stuffy shipment box full of bunk beds, exhausted men and the sticky odour of day- long sweat, combined with smelly socks stuffed inside shoes caked with freshly dried mud from the banks of the Godavari.

Pammi is one of the many overworked and exhausted workers on the project. He is happiest when he sits down and takes a break from ferrying me around to finally watch me leave.

During the monsoons, before entering the plains of Rajahmundry in the East Godavari district of Andhra Pradesh, the River Godavari carries along huge amounts of silt. It is only near Polavaram that the misleadingly slim river flexes its muscles and transforms into the country’s second longest river—it runs a course of 1,465 km from Maharashtra to the Bay of Bengal—after the Ganges. Locals and boat operators go on high alert as its reddish and ferocious flow is seen as an indicator of an imminent flood. They call it erra neeru, or ‘red water’.

On 16 September, in an ambitious and aggressive move, Chandrababu Naidu, Chief Minister of Andhra Pradesh, inaugurated the river linking project at Ibrahimpatnam. He did so by pouring a pot of the mildly reddish and mostly brown water of the Godavari into the dark blue water of the Krishna. Two days later, the state’s irrigation minister switched on the lone functional pump borrowed from the Handri Neeva Project. Submerged 14 metres below the water level, the mismatched pump will be uninstalled and returned only once the official Chinese pumps for the purpose make it to Pattiseema. The makeshift arrangement has ensured that 80 thousand million cubic feet of water began its slow crawl of 170 km to enter the Prakasam Barrage via the Polavaram Right Canal, which is not yet complete either.

The challenge remains the transfer of accumulated water upwards to the drought-prone fields of Rayalaseema. Three years of bad crops have shaken the faith of farmers there and one more year might prove catastrophic. Locals around Pattiseema and Vijayawada find it hard to comprehend the government’s tearing rush to activate the project, but hope that till the construction of the Polavaram Dam is finished, this project might be an answer to the water woes of Rayalaseema farmers.

Back from Pattiseema and on my way to Room 207, I ask the manager at the reception if the leaks have been fixed. He nods and throws yet another confident ‘yes’ at my exhausted face. Once back in the room, I can see that he is right. The leaks have been fixed, but so too the rest of the water supply. He has switched off the mains, it seems. I call him on the intercom to say that there is no water in the bathroom. He asks me to wait for a few minutes, and I soon hear the familiar yet annoying hiss and slam of the leaking taps. There are indeed no quick fixes when it comes to water supply.