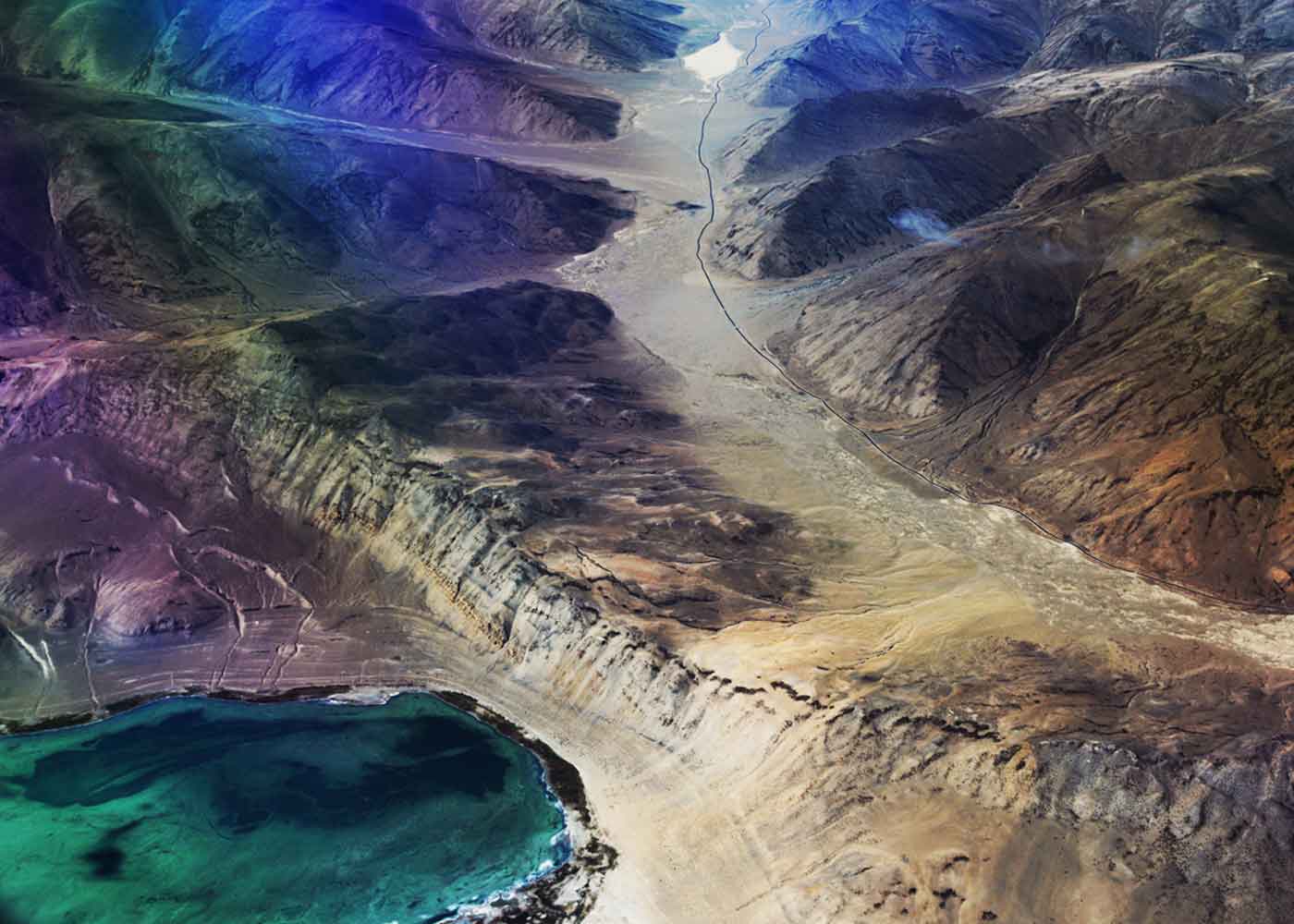 The carbon footprint of popular culture has rarely left such terrible footmarks on an entire landscape like it has in Pangong in the last few years. The impact of the movie 3 Idiots (2009) is so widely felt and visible that it does not really call for a before-after analysis of one of the most spectacular lakes in the world. Jaw dropping records from Leh Tourism reception center reveals that numbers went up from 77,800 in 2010 to 1,48,588 in 2011, which apparently is more than half of the entire population of the entire region of Ladakh. Between 2014-17, five and a half lakh tourists visited Ladakh out of which 2016 alone recorded close to two lakhs. Now, one skips a beat while witnessing the cobalt blue Pangong against the various shades of brown changing it color depending upon the cloud formations, but also after conversing with local villagers and taxi drivers. They confirm how the numbers of tourists have drastically gone up in the last half a decade following the unfolding of Rancho’s romantic trajectory shot on the banks of the pristine lake in the climatic moments of 3 Idiots.

Ranchos who taught a reformative lesson to Chaturs against the backdrop of the world’s highest salt water lake, Samar Anands (SRK in Jab Tak Hai Jaan) who wrote memoirs or watched the prospective romantic interest dive into the freezing-blue or Milkhas who ran with truck-tyres to built stamina in the high altitude cold desert – might have returned home to deliver huge box-office successes, but their heroics around the region has heavily impacted establishing the space as a aspired hyper-destination.

There are close to 7000 taxis functional during the peak season between May-August and the number of tents along Pangong has significantly gone up. Popular imageries have encouraged tourism through simulated images that project the space as a site of fantasy and pleasure waiting to be collectively gazed upon. Construction and consolidation of such a gaze is often mediated through signage, which in this case is the massive commodification of areas surrounding the shooting-points of 3 Idiots’ climax scene, near Spangmik village. A range of eating, staying and selfie-points are named after the fictional figure – Rancho. The plantation of the replica of a yellow scooter (used by Kareena in the last scene) aims to take the simulated experience closer to the staged-authenticity, offering an easily identifiable signpost for visual consumption.

Tourism has flourished in Ladakh in the last decade also because of massive improvement in road conditions after the war in Kargil – making the road trip way more pleasurable. Frequent flights from Delhi make it possible to fly over the rouge terrain in no time these days. But, one must realize that it needs a lot of commodities transported from elsewhere to counter the challenge and restrictions imposed by a high altitude desert devoid of vegetation and to serve the ever-desiring tourists wanting to carry homely comforts no matter where they go. Pleasure seeking requires delivery of facilities such as running hot water, western commode, well-cushioned beds, tasty food, clean water and many such amenities. Much of the problems related to building the infrastructure for these services, emerge from the fact that most services provided by the tourism industry have to be delivered at the site of interaction between the service provider and consumer. In a scenario where the producer and consumer of services inhabit a common space causing a great deal of special fixity, there is bound to be severe ecological consequences due to disposal of waste material and sewage. Congestion of vehicles and over crowdedness along the banks of the lake to cater to the selfie spree, invariably interrupt the unspolit view – destroying the sanity of the space and its very limited resources to support and serve so many human lives.

As the mercury touches subzero temperatures in October, the rush of organized mass tourists wanting all the domestic comforts and a possible duplication of their household facilities finally come to an end. Seeking familiarity of food, comfort, connectivity in one of the most environmentally sensitive zones lead to visually predominant abundance of trash and tremendous tampering of the local eco-systems. Along with the leftovers of one-time-use commodities, they leave being traces of their horrendous comfort-seeking desires in an otherwise inhospitable geographical locale. Makeshift arrangements of superior self-indulgent materials lay barren – stripped off its flesh with bones exposed – often leading to the worst form of visual pollution against such a breathtaking backdrop. A sensational backdrop that otherwise deserves an immersive pause has been converted into consumerist rubble to cater to mass tourism.

Theorizing the tendencies of the easy-going, fun-loving, pleasure-hunting tourist – seeking secured insecurities or full-proof adventure that involves little or no risk, Gorge Ritzer once wrote, “tourists are willing to eat at the campfire, as long as it is a simulated one on the lawn of the hotel”. The postmodern tourist seeking a short break from the daily monotony of work with an assurance of safe return is too eager to cut out uncertainties. Hence the notion of ‘far away from everywhere’ in the ‘wilderness’ is often invariably located in the advanced hospitable facilities of retreats that are digitally well connected. In such a location, the original inhabitants have typically been the ‘other’ from the point of view of a typical tourist, who by definition is supposed to be indifferent and impassionate in initiating an immersive experience in the ‘local’. S/he is rather supposed to remain preoccupied with the sight-seeing to create a collage of visual memories to be instantly shared online and served as visual commodities that declare his/her presence characterized by surface level (dis)engagement with the space. Isolated and detached from the local environment and people, the tourist is often invested in the posedauthenticity and psudo-events that are part and parcel of the package-trip.

But unfortunately, in Ladakh, the instant sharing is not yet a possibility as it is one of the very few palaces that still hold the privilege of remaining out-of-reach. Unfamiliarity in Ladakh, poses serious uncomfortable situations in a non-place that is mostly devoid of habitation. The beauty of omnipresent barren-brown of an expansive sight displaying a wide range of saturated colors and patterns of moving shadows of clouds creating a vast range of transient shapes is the silent protagonist here. And barring the monasteries and highest motorable passes (graphically displaying the altitude) there are no must-see landmarks to be tickmarked or to attract collective-gaze. The demand of introspective immersion in the excess of visual delight alone might be unfamiliar to someone who is desperate to have fun all the time. In the absence of an exhaustive list of typical visiting and shopping sites selling a vast array of predictable tourist experiences, the restless tourist can often get bored here and seek all the comfort in the tent after reconciling with the absence of specific and predetermined sites of simulation. Hence more and more home stays give away to luxury tents. Most tourists are eager to perform the familiar even in a space that is so unusual. Such a scenario is apt for the entry of everything that is a part of a ‘package’ – packaged trip, packaged food, packaged water, packaged comfort of luxury tents.

The household sizes in the three villages located in a span of ten kilometers from each other along Pnagong, Spangmik, Maan and Merak is not more than thrity. Spangmik, which is nearest from Leh is the one most effected by filth of invading tourists due to its proximity from Leh. Modest home stay options have given way to luxury tents that has popped up like dirty mushrooms and covered the foothills completely in the last five years. While the upsurge of tourism in recent years may have provided livelihood to several families across Ladakh – increasing their consumerist aspirations – the increased tourist flow has lead to the betterment of services desired by the packaged-tourists and creation of pockets of seasonal spectacles to be abandoned soon after the tourists depart. The material excess consumed during the season lay abandoned waiting for yet another onslaught in the next season. Even though Government of India has declared Pnagong as a cold desert sanctuary and The High Court has issued all illegal business establishments to be removed from the vicinity, pictures prove otherwise. Most of these tentareas are leased out by locals for a sum of one lakh rupees per season to people mostly from Leh. Those who take it up on lease make that much in a week’s time during the peak of a season.

In my last five visits in the last eight years, I have observed additional makeovers on the shore of Pangong. Thousands of tourists visit Pangong everyday and the numbers are bound to increase in the coming years. Some of them return on the same evening after the regular selfie shoots and others stay back for a night – both leaving behind their trash behind. Some of it is cleaned up and burnt behind the mountains the rest remain stationed and exposed as a signs of reckless consumerist obsession even at an altitude of 17500 feet. The covered-up basins, commodes and pipes gaze at the uninvited tourist strolling in the off season as fragments of its former self and the lake-view is absolutely damaged by the chaotic assemble of these ruinlike materials.