Text and Photographs by Michael O’Neill 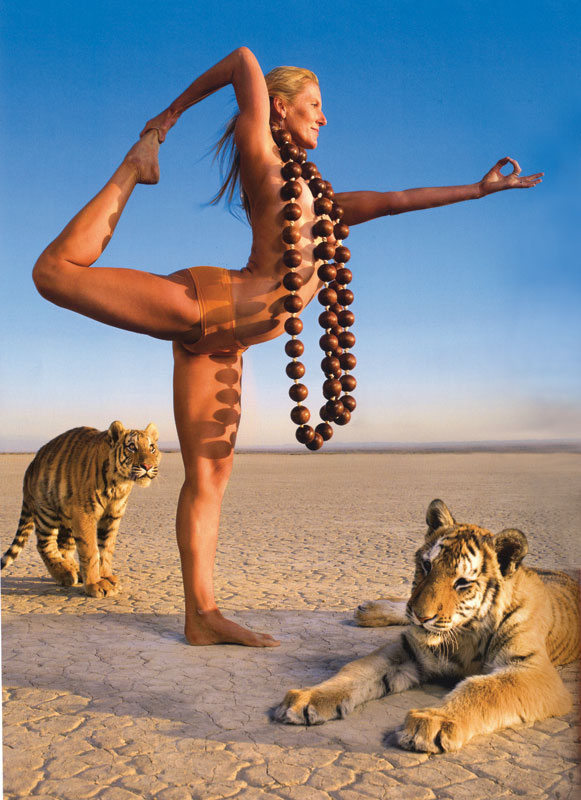 Some years before I started practicing yoga seriously, I made a set of photographs of His Holiness the Dalai Lama. I had a number of gold-leaf panels painted in New York and shipped to the location where we reconstructed them on a hot summer day. We’d gotten some wonderful frames of His Holiness meditating, and by the end of the shoot I was dripping in perspiration. It is proper protocol to sit lower than His Holiness, so I was kneeling to his left. Smiling at me, he reached down and with the side of his forefinger gently swept from my jaw upward to catch and clean the beads of my sweat. It was such a simple, heartfelt gesture, and with a bigger smile he said, “You’ve worked so hard.”

My dedication to work was a constant, never-ending pursuit of perfection and excellence. As a professional photographer and then a portraitist,some 35 years later the travel, the 14-hour days, the pressure of concentrated,intensified settings brought me to the surgeon’s table to fix some calcified nerves in my neck. When I came out of the surgery, my right arm — my camera arm — was paralyzed. The neurologists told me I would never use it again.

Nights were difficult as I tried to cope. Often restless, I would find myself listening to Rachmaninoff at three in the morning, gazing out the window at the World Trade towers. I could have accepted this, sued the surgeon for medical malpractice, resigned myself to live with a disability. Instead, I decided to choose a different path and shifted my intention in a much more positive direction. The first step I could take in order to really confront what I was going through was to study meditation, to learn to sit with myself, to calm the fear. I then worked with a brilliant hydrotherapist who helped me move my arm again, inch by inch, using the resistance of water. At the same time, I practiced meditation with molecular biologist and mindfulness master Jon Kabat-Zinn. By the end of year one, the very nerves the experts had pronounced dead had almost completely regenerated themselves, and I could use my arm. Yoga and meditation had become indispensable to my life.

The journey never had a specific destination. It was simply my own personal path with yoga. That path was a river, and the purpose was to be on the water. The purpose was the process itself. I hadn’t been back to India for quite a number of years but the Ganges, “Ganga Mata”, was mother to me — my energy flow through my relationship with yoga. It often felt like rafting, like river running. I would “put in”, then float, drift, pull the oars, never knowing what was around the bend. And then at some point, I would “take out” and the flow would become its own meditation.

The next step in this journey would begin four years after my surgery. It was during the dog days of summer in New York City; and finally after so many humid, hot nights the evening was cool, the sky a beautiful indigo. I had just left a yoga class, when I noticed a woman walking down Fifth Avenue in a crisp white shirt smiling at me. It was my friend Susan White, the director of photography at Vanity Fair. How strange that in a city of over eight million people you can literally bump into someone you know. “So you’re doing yoga too?” she asked me, with a nod to the mat rolled under my arm. We talked about our respective yoga practices, and eventually I got around to telling her I’d love to do a portfolio of the masters and gurus of yoga. Susan simply said, “Absolutely”, and followed with, “and then a book.” And that’s how the idea for this book was born. She suggested I send a proposal to Graydon Carter, editor of Vanity Fair. I had two days to write it before I had to fly to Chengdu, China, to photograph pandas. Four months later, it was green-lighted.

The project changed my life. I’d been wondering what the next transformation would be. And now I had an answer. The yoga series gave me a new focus. It was my idea, my passion, so much more than just another job. I decided early on that I would concentrate on making rather than taking photographs, to strive to make that emotional and spiritual connection with all of my subjects that would transcend the medium, and become something more.

Text and Photographs by Michael O’Neill