‘We need a book of the times we’re living in’

Investigative journalists Adrian Levy and Cathy Scott-Clark tell Shikha Kumar about the research for their bestselling book on Osama bin Laden. A film is in the making 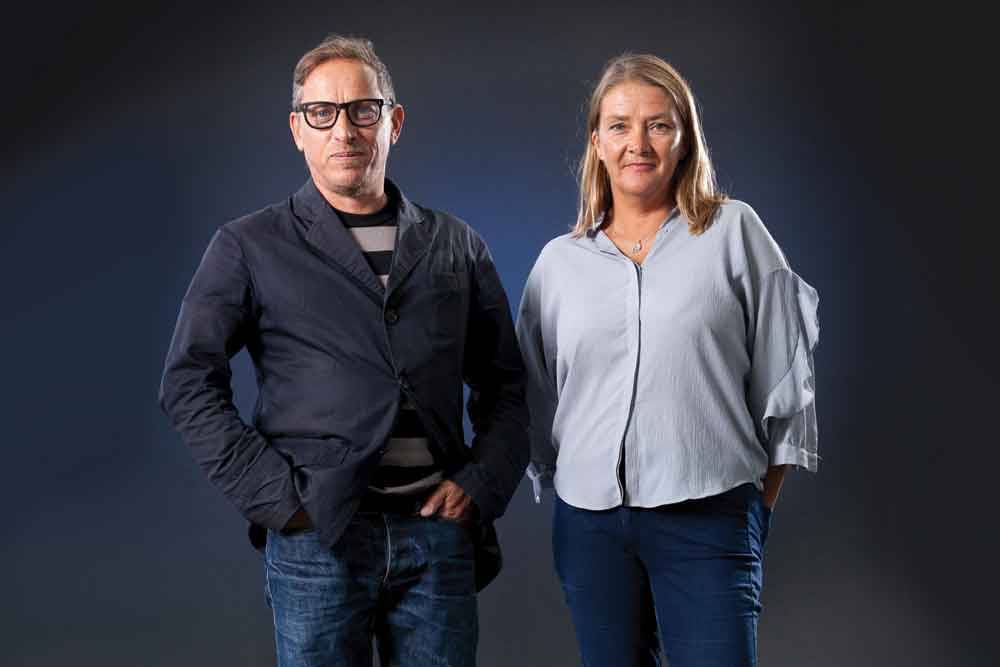 A PHOTOGRAPH OF a young Osama bin Laden showed him standing next to his many half-brothers, all of whom were dressed in white thobes—the traditional Arab dress. Only Osama was clad in a black one. The photograph was a fascinating one for Adrian Levy and Cathy Scott-Clark, for it provided a peek into how early influences often shape a person and his motivations. When Osama was a child, his father divorced his mother and she was moved out of the family compound, later marrying an employee of his father’s company. Osama practically grew up as a single child.

“He was literally the black sheep of the family,” says Levy, as Scott-Clark adds, “He was pushed towards becoming the black sheep by his own father. It’s that kind of rejection, being told you can’t live in the family compound, that feeds into Osama the publicity seeker. His need for recognition—Osama at the end of his life, sitting in Abbottabad and watching pictures of himself on TV—goes back to his childhood.”

The investigative journalists’ latest book, The Exile: The Stunning Inside Story of Osama bin Laden and Al Qaeda in Flight (Bloomsbury; 619 pages; Rs 699), traces the decade Osama spent in exile before being killed in a CIA-led operation by US Navy Seals in Abbottabad, Pakistan. Written over four years, the painstakingly researched book takes the reader on a multi- perspective journey through Afghanistan, Iran, Romania, Thailand and Pakistan, with revelatory stories from Osama’s family members and important Al Qaeda associates.

When they began work on it, the author-duo was keen to bring out a different side to the 9/11 attacks and the Abbottabad raid of 2011, one that hadn’t been orchestrated by the West. “It’s about working out the larger geopolitical picture and placing within that, the human stories,” says Levy who along with Scott- Clark was recently in Mumbai. At a session at a literature festival, Scott-Clark was asked if she was attempting to humanise terror. “If you don’t bother to understand people and their motivations, the way they’ve reached the point where they want to commit some kind of attack, you’re never going to achieve anything,” she says, pausing to add, “To understand Osama might not help in stopping him or the Al Qaeda, but it’s an important facet of any proper investigation into your enemy.”

Scott-Clark was working in Islamabad a few months after Osama’s death when the idea for The Exile took root. The brother of Osama’s youngest wife, Amal, had come to Pakistan from Yemen to try and get her out. She, along with other family members from the night of the raid, was being interrogated by the ISI. Through him, Scott-Clark established contact with Amal and one family member led to the other.

It’s the voices of the women in the family that bring out the poignancy in the book. Osama’s two wives, children and grandchildren as well as the two guardians’ families were all cooped up in the Abbottabad house. In a distressing narration of the night of the raid, we read about Osama’s youngest wife Amal as she is shot in the leg by a Navy Seal officer and later witnesses her husband’s death along with their two-year-old son Hussein. Miriam and Sumaiya, his daughters from his third wife, are manhandled by the Seals and forced to identify his body, as is Amal’s 11-year-old daughter Safiyah.

If you don’t bother to understand people, the way they’ve reached the point where they want to commit some kind of attack, you’re never going to achieve anything – Cathy Scott-Clark

“We’re not in any way saying the capture of Osama was a bad thing. What’s interesting is what happens inside the house, the dynamics of that domestic caravan. By year ten of his hiding, the house has all these wives and children. How do you keep that quiet? You need a doctor, a nurse, toys for the children, the right groceries… you need to keep the family healthy and fit. We were discussing how in the end, the human dimension blew the operation more than the CIA,” says Levy.

In a departure from the West’s version, The Exile reveals how the Iranian military offered sanctuary to Osama’s family and Al Qaeda’s leadership in Tehran. When the reformist government found out, they tried to wrangle control by offering them to America, only to have it turned down by the Bush administration that had branded Iran as part of the ‘axis of evil’. The authors discovered this only once they interviewed Al Qaeda insiders like Osama’s spiritual adviser.

“It showed the real truth of American foreign policy. They had already decided they were going to war in Iraq, so nothing could get in the way of that. When Adrian interviewed Nada Bakos, the CIA agent whose job was to find links between Al Qaeda and Iraq, she couldn’t find anything,” she says. Levy adds that the war on Iraq was framed falsely around weapons of mass destruction and Saddam Hussein’s sponsorship of Al Qaeda.

While extensive research for the book meant distilling different points of view into a coherent narrative, a few stories stood out in the writing process. For Scott-Clark, it was Osama’s oldest daughter Fatima’s. Osama wasn’t interested in his daughters—they were meant to be married off to expand the network. Fatima was married off at the age of 13 and after her husband was killed, she was married to Osama’s spokesman. In 2013, he was captured and extradited to the US. “I had asked her what her happiest memory of her father was. She recalled an incident in the 90s in Sudan when her grandmother Allia was visiting. Allia had asked him what he thought of Fatima and he had said ‘She’s very good.’ That was the biggest compliment he had given her. She had suffered so much and despite everything, she loved him, which is so tragic.”

Another unpleasant story is that of Abu Zubaydah, Osama’s lieutenant and 9/11 planner, who was picked up as a high-value detainee and became a guinea pig for CIA torture, according to the authors, who obtained his prison diary from his lawyer. “He was not a good person and did stupid things like facilitate Al Qaeda. But what he’s gone through over the years, having been falsely accused of things, is unbelievable. He was waterboarded and became the first person to be put through the enhanced interrogation programme. He’s now forever imprisoned in Guantanamo Bay,” says Scott-Clark.

The idea that Al Qaeda is a nebulous force is erroneous. They’ve reformed, created a new structure, and are a vanguard of experts now – Adrian Levy

Levy says there’s a broader picture behind their attempt to humanise the characters. He recently noticed a whole page about great books on authoritarian leaders in The New York Review of Books. “There’s new work on Stalin, Hitler, the Russian Revolution pretty much every year, and they’re all great books, but they’re often told through the prism of the victor, through the CIA or FBI. Our feeling is if you don’t know what’s going on in Mauritania, Yemen, in the shura, in different camps, you don’t know what’s going on with 9/11. We need a book [for] the times we’re living in, which can tell the story from the other side.”

The London-based journalists and documentary filmmakers have been collaborating for close to two decades and have written four other books together, including The Siege (2013), on the 26/11 Mumbai attacks, and The Meadow (2012), on the kidnapping of Western backpackers in Kashmir in 1995. Their investigative reportage journeys have taken them to eastern Europe, Burma (where they were held under house arrest for seven days) and Pakistan’s Swat Valley, for an article on a specialist school that rehabilitates would-be suicide bombers. The risks involved mean they have to go invisible for long periods of time, staying completely off social media and fighting off temptations to reveal leads.

They’ve learnt many lessons over the years, most important of which is to not put themselves in the story, no matter how extraordinary their journey to get it. Their objective is to write books that have the potential to reach the widest possible audience. “Our first book, Stone of Heaven [2001], had really great scenes but the narrative was unsuccessful. We realised that there’s a need to keep a tight group of characters running though the stories that can reflect every aspect in a more cinematic fashion. We’re not writing academic books,” says Levy.

They usually divide the subjects up and write separately, later helping each other with the structuring and rewriting process. According to Levy, Scott-Clark’s strength, apart from finding people, is working on a tight albeit detailed chronology of events. In The Siege, they had a range of room numbers and found out who the people were in each room, and then worked out where the chefs were. “This way, we could move everyone between those rooms to give that sense of fluidity and movement,” he says.

Scott-Clark led work on The Exile, beginning with drawing up a list of which Al Qaeda members were alive and not in Guantanamo and would talk. “Alongside that, I was looking at who in the family I could talk to. The process took a long time and the interviews didn’t come in at the same time. What was interesting was once you got to know the family, the letters the CIA would release every year became easier to understand and confirmed a lot of things,” she says.

The Exile is now being adapted into a movie by Vishal Bhardwaj, and the duo is closely involved in the process. The film is an important one for them, especially considering their stance on the other cinematic adaptation of the decade-long manhunt, the Oscar-nominated Zero Dark Thirty. In the preface to the book, they call the movie ‘materially wrong in many ways, perhaps none more important than its claim that torture unearthed vital knowledge leading to Osama’s capture.’

With this movie, they want to ensure it’s not an American story with American heroes. There’s talk of bringing in a unit from the Gulf, and the languages involved will be Urdu, Pashtun and Arabic. “We want to try and reconstruct things in a way that reflects the authenticity emotionally. You can’t get an American crew to understand the nuances of the life of the caravan moving through the Asian Subcontinent. That’s why we want to be in on the whole process—locations, crew, creative talent—and not shuttered away in California,” says Levy.

Globally, we’ve seen a rise in Islamist terror with attacks in Manchester, London, Brussels and Paris in recent years. Around the time The Exile was released, a video of Osama’s son Hamza bin Laden surfaced, where he offers advice for “martyrdom seekers in the West”. Scott-Clark believes that he’s a distraction and is actually being used as a mouthpiece by Ayman al-Zawahiri, who took over Al Qaeda’s leadership after Osama’s death. For Levy, the Western narrative that Al Qaeda was crushed by Osama’s killing is flawed. “The idea that they’re a nebulous force is totally erroneous. They’ve watched, reformed, created a new structure, got a new strategist and are a vanguard of experts now.”