To Break an Absurd Record

Two friends take a leap of faith in this fictionalised memoir 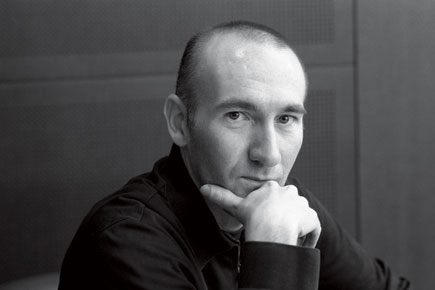 It took me till the last few pages of Stephen Kelman’s Man on Fire to really feel at ease with having enjoyed it. For it is in his author’s note that he reveals that the record breaker extraordinaire Bibhuti Bhushan Nayak (aka BB) actually exists and that the two men have been close friends for several years. To read the book with that knowledge is to be willing to stretch your credulity, to view the apparently delusional with a kinder eye. It also turns this novel into a rarer thing— a profound and compassionate inquiry into the nature of heroism, suffering and true purpose; in other words, why a man would set out to receive 43 kicks to his unprotected groin in a minute and a half.

Man on Fire opens with John Lock, one of its narrators, in a prison cell in Mumbai. He is here for ‘nearly killing a man.’ Turning away from the tension of that moment, Kelman gives us his second narrator, BB himself. He is on the cusp of setting a new record. We learn the man has a wife and a young son. His wife begs him to desist from the seeming lunacy of his attempt, but BB will not be talked out of his determination. Instead, as the groin-kicking challenge progresses, BB widens his stance, underlining his vulnerability, and smiles with pleasure when one of his (bewilderingly enthusiastic) friends lands a perfectly placed blow. It is BB’s calm and composure, his seeming ability to dominate and then transcend his pain, which fascinates Lock.

It is a fascination readers will share. Lock, we eventually find out, has lived an unremarkable life but is now confronting a painful death from disease. He wishes to be touched at least once by greatness, and to find reflected in himself the courage that BB so routinely displays. After seeing BB on TV, Lock becomes a fugitive from his own life. He leaves his wife, fakes suicide and arrives at BB’s doorstep with a bag full of cash and an earnest desire to help the record breaker achieve his greatest feat. BB, though initially sceptical, accepts his offer and agrees to train Lock until the Englishman is strong enough to break 50 cricket bats on BB’s body—this being the latest challenge. Lock is here to learn, but there is an unnerving darkness to him as well— he seems almost keen to beat his new friend senseless. BB says he is able to defeat pain through a combination of ‘Breathing. Meditation. Training. Diet. The grace of the almighty.’ His motivation for doing so is to tell people ‘that if they endure the pain they will reach happiness that comes after’. In BB’s view, pain is inexorably part of the Indian existence. ‘Life is constant struggle,’ and BB himself has known hardships—starvation, unemployment, poverty, illness. BB’s character is drawn with obvious affection and admiration, and both men receive equal billing in this book. Lock is the less likeable of the two, but the very nature of his adventure allows us to explore his unsuspected depths at the same time as he does.

The real heart of this book is the friendship that develops between BB and Lock, who come to love each other unabashedly. So much so that I find myself pitying their long-suffering wives, both of whom are relegated largely to the sidelines where they must pick up the pieces after their husbands’ escapades. Both men seem aware of the unfairness of this arrangement, but this knowing only feeds the tension in the novel between duties and dreams; between what one owes the world, and what one wants from it.

However, there are moments when Kelman’s undoubted gift with tragi-comedy falters. His language, so beautiful in his Man Booker nominated offering Pigeon English (2011), sometimes crosses the line from poetic to overwrought. So you have a beautiful description of old Bombay where ‘untapped dreams rise like smoke from the rubbish fires and rat holes’, which as one draws nearer proves ‘fertile and teeming with tradition and mundane terrors.’ Then there is this description of the first time Lock kicks BB in the groin: ‘I’d heard my own bones creak and mesh into a new formation that would let my greatness out like rays of light through pinholes in a blanket.’

Though you might want to wince at the odd sentence, one is willing to forgive much for the sincerity and respect Kelman brings to this fictionalised memoir. The book is by turns absurd and luminescent, and in converting fact into fiction, Kelman gives us something that feels true to what it means to be human. He has said in interviews that the real BB wrote him a six-word review upon seeing the manuscript, and really it feels like the only one the author need take notice of. The email read: ‘Love it. Too emotional to talk.’

(Smriti Daniel is a Colombo-based journalist)