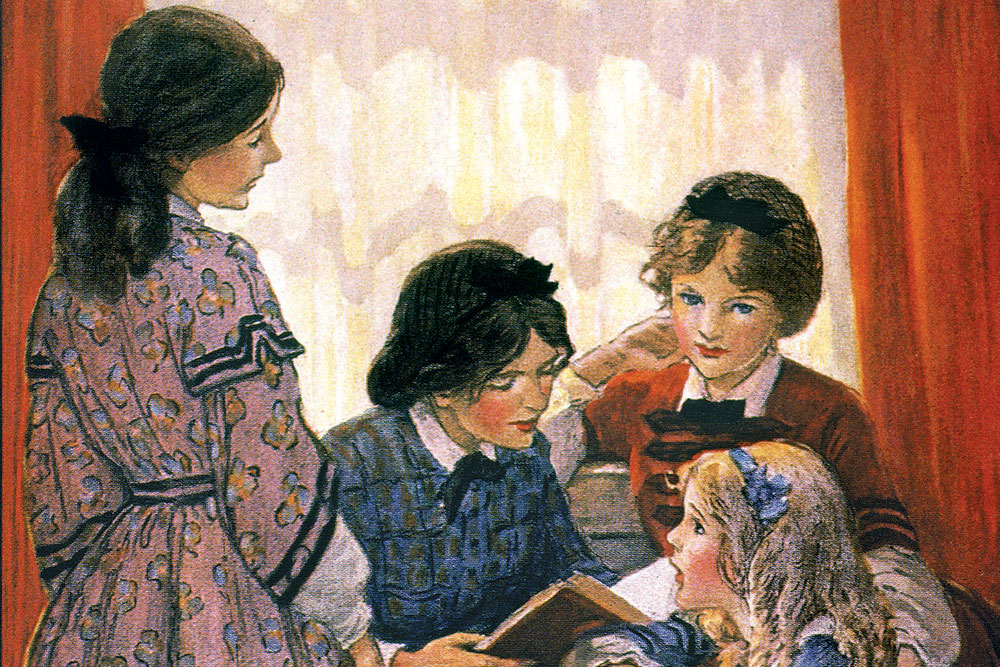 A WHILE AGO AN online literary journal I follow informed me that Louisa May Alcott’s classic novel Little Women had completed 150 years since its publication in 1868. One hyperlink led to another and I had soon skimmed through more than a few think pieces about the politics of the novel, specifically the (American Civil War) background to Alcott’s beloved story of the March sisters of Concord, Massachusetts—Meg (16), Jo (15), Amy (13) and Beth (12)—and their mother, Marmee.

However, the barrage of ads that Google threw my way over the next few weeks weren’t related to Little Women or the Civil War at all (or so I thought). They were push notifications about a TV show called Haq Se, on Alt Balaji, Ekta Kapoor’s foray into the streaming business. It appeared to be a soap opera set in Kashmir, directed by Ken Ghosh, starring Rajeev Khandelwal and Surveen Chawla, among others. Given the venue and the makers, I was apprehensive (Ghosh has directed other, eminently forgettable television shows for Alt Balaji, including XXX Uncensored and Dev DD, the latter an execrable cover version of Devdas). Ten minutes later, the apprehension gave way to intrigue (and bemusement at the advertising strategy), for Haq Se is actually Little Women set in Kashmir. In hindsight, this was to be expected—after all, this is the novel that has now received over a dozen known film and TV adaptations, including multiple turns in both Hollywood and British cinema, with future adaptations being scripted as we speak.

The March sisters are the Mirza sisters, Kashmir’s never- ending war is a great like-for-like replacement for the American Civil War, and TV’s original nice guy Rajeev Khandelwal, of course, is the largely absent moral paragon Mr March (Mr Mirza here), an abolitionist chaplain serving the Union forces. The series has all the bells and whistles of an Ekta Kapoor show, but underneath it all, it has its heart in the right place, and its politics where they should be, that is, on the side of women, children, minorities and those who find themselves under the wheels of the war machine. In just the second episode, a simplistic yet startling line, spoken by Jannat Mirza (the Jo March analogue) really hit home: “Puri duniya Kashmir ko ignore kar rahi hai, jaise Kashmiri mard Kashmiri auraton ki khwahishon ko” (“The whole world is ignoring Kashmir, just like Kashmiri men ignore what Kashmiri women want”).

What is it about Alcott’s universe that 150 years down the line, it’s still proving to be such fertile ground for reinterpretations halfway across the world?

One of the main reasons behind the enduring appeal of Little Women is that circa 1868, it was one of the first English novels to address the lives, concerns and motivations of young women. To put it bluntly, it was a pioneering feminist novel, published at a time when American women had not yet escaped the clutches of compulsory domestication. Yes, the sisters do speak about their absentee father a lot, but who in their circumstances wouldn’t?

Besides, the four sisters soon became archetypes for the different kinds of women we meet in books, and later, films and TV shows around the world. Meg would become the basis for Hollywood’s ‘girl next door’, for example, a brown-haired, blue- eyed beauty with, as Alcott takes pains to point out, particularly beautiful hands. She is a polite, soft-spoken nurturer, and although some critics believe her to be Alcott’s critique of the pliant, submissive woman, it’s tough to think along those lines when you re-read the novel—such is the genuine warmth and authorial affection that Alcott has for her characters.

Jo March, the fiercely independent, strong-willed protagonist of the novel (Alcott devotes the most number of words to her, easily) was surely one of the starting points of the now- hackneyed ‘strong woman’ character in Western pop culture. She is a bit of a tomboy, cares little about appearances and loves to do ‘boy things’ like sprinting, climbing trees and so on. She also loves reading and writing and was, in fact, partially based on Alcott herself and her own authorial ambitions. Circa 2018, this is fairly covered ground—we’ve moved on to un-gendering basic human kindnesses and empathy, and we’re rightly celebrating the vulnerabilities as well as the ‘strengths’ of characters across genders. But think about Jo March in 1868— what a barnstorming way to prick the balloons of White male novelists (most of whose adventure books revolved around Caucasian Adonises rescuing women like Jo and ‘taming’ them into domesticity)!

At least in Book One (released a year after its predecessor, Book Two is now considered a separate book, especially in the UK, where it was published as Good Wives), Amy and little Beth are supporting characters at best. This is partially because they are the youngest, and Alcott reserved most of their emotional and intellectual development for Good Wives.

Without Jo, there’d be no Ellen Ripley (Sigourney Weaver in the Alien films) or Rey (the current protagonist of the Star Wars films) or Imperator Furiosa (Charlize Theron’s badass character from the new Mad Max series). Meg has been cited as an inspiration behind characters as iconic as Mary Poppins (Meg becomes a governess in Book Two).

Alcott plays these two sisters off each other expertly, Meg tempering Jo’s outbursts and Jo encouraging Meg to be a little less circumspect. Most importantly, there is a ton of mutual respect and sisterly love between the two—Meg mothers Jo when the latter’s manuscript is burnt by an angry Amy (who is, at that point in the book, quite the brat), and for once, Jo is deeply grateful for the pampering.

A couple of years ago the Pakistani author Sarvat Hasin wrote a novel called This Wide Night (2016), which by the author’s own admission, was “Little Women meets The Virgin Suicides in Pakistan”. To my mind, This Wide Night is one of the cleverest examples of a ‘literary cover version’. Her recreation of the scene when Jo March meets her future best friend (and brother-in-law, although that comes much later) Laurie is masterful in particular. The Malik sisters of Karachi are the focus of Hasin’s re-creation and the pieces all start falling into place— the conservatism of Karachi high society, with their veils and military curtsies, mirrors Alcott’s domesticity discourse perfectly. It is a strong novel on its own, even for a person who has never heard of Little Women. But for those of us who have read and re-read Alcott, Hasin’s novel is yet another example of the malleability and universality of these remarkable characters.

The world of Little Women reminds us that courage comes in all sizes, shapes and genders, and we ought to be suspicious of folks who insist on one particular type

MUCH HAS BEEN written about the underlying politics of Little Women; Mr March (a chaplain for the Union forces, who were in favour of abolishing slavery) was, as we now know, partially inspired by Alcott’s own abolitionist father. Mostly, critics and scholars agree that while Mr March was a good, kind man of morals and convictions, he did have a fair bit of the White saviour complex. Also his decision to leave his young family for a literal war was taken unilaterally, with no consultation with his wife.

The book that established these points most effectively (while also fleshing out Mr March as a complicated, flawed but ultimately noble and well-meaning man) was not an academic work or literary criticism. It was actually a 2005 novel, written as a piece of fan fiction—called March (2005), by Australian- American journalist and author Geraldine Brooks and had the blessings of the Alcott estate.

The central deceit of March is the reveal that Mr March had once been the lover of an educated, beautiful and sophisticated slave called Grace many years before he met his wife Marmee. However, his actions indirectly lead to Grace suffering a brutal, very public whipping at the hands of her master, a cruel, pompous, short-sighted man who thinks of African-Americans in mostly animalistic terms.

Again and again Brooks, through Grace, pricks the well-meaning but naïve and presumptuous worldview of Mr March, who believes his genteel criticism of his fellow White men will bring about a revolution. When they finally part again, March offers to become a chaplain for ‘her people’. By now, Grace has softened but in this moment, she tells him off sternly again.

‘We have had enough of white people ordering our existence! There are men of my own race more versed in how to fetch and carry than you will ever be. And there are Negro preachers aplenty who know the true language of our souls. A free people must learn to manage its own destiny.’

Similarly, Marmee, as narrator of some of the chapters in March, makes her displeasure with Mr March quite clear. ‘It was folly to let him go. Unfair of him to ask it of me. And yet one is not permitted to say such a thing; it is just more in the long list of things a woman must not say.’

Brooks’ novel thus raises an excellent counterpoint to Alcott’s homilies about courage under fire—it rightly points out that ‘courage’ sometimes is not putting oneself in the line of fire, especially if it means protecting the interests of those closest to you. Mr March himself realises the wisdom of this and at the beginning of one of the chapters he narrates in the book, ‘Are there two words in the English language more closely twinned than courage and cowardice?… To me the two sit side by side on the circle of life, removed from each other by the merest degree of arc.’

In Stephen Crane’s great Civil War novel The Red Badge of Courage (1895), the title refers to what the protagonist interprets his war wounds as—which is to say, certificates of courage. The world of Little Women, and the unforgettable characters therein, reminds us that courage comes in all sizes, shapes and genders, and we ought to be suspicious of folks (especially white men) who insist on one particular type.