A cultural study extending from Periyar to Cho 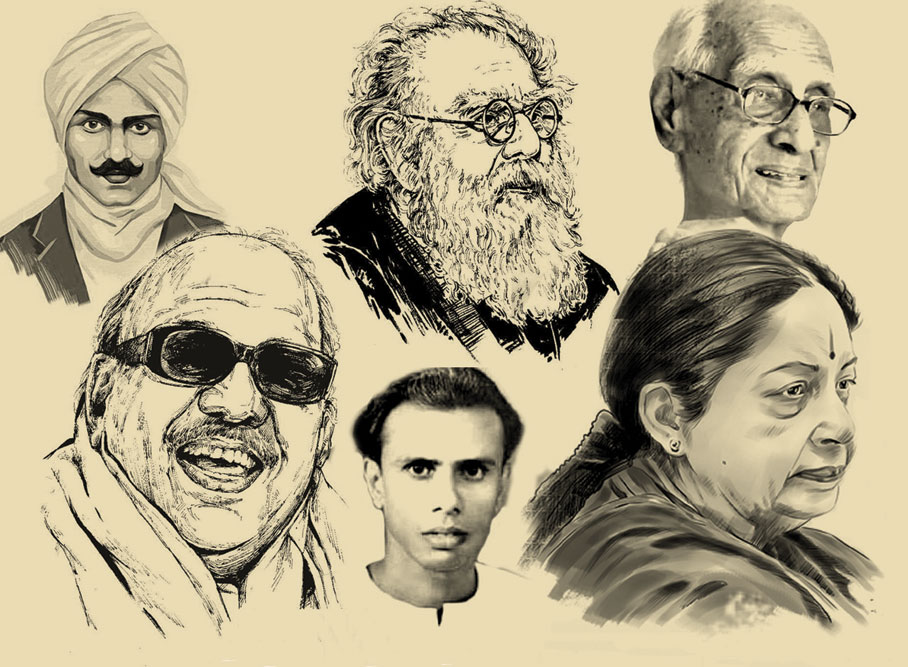 WE HAVE EXISTED as a Union of states for 70 years, but our knowledge of people and communities other than our own or outside our state of domicile is meagre. Even TV news anchors in Delhi get it reliably wrong about ‘far-flung’ regions like the North-East or the southern parts of the country. As the neo-liberal juggernaut rolls on, access is far ahead of understanding and even the uber- hegemonic pan-Indian intellectual discourse on these regions remains shallow and wanting. Neither do we have a culture of encouraging scholarship across states. In this reflexively provincial milieu, Tamil Characters by historian AR Venkatachalapathy, which aims to fill an important gap in our public discourse, is a welcome first step.

The first section ‘Political Personalities’ includes short essays describing the life and achievements of Periyar, the founder of the Dravidian movement; four chief ministers of the Dravidian movement who ruled Tamil Nadu between 1967-2016; and two other relatively minor figures, ‘Cho’ Ramaswamy and C Subramaniam. It is not clear why K Kamaraj, the architect of Tamil Nadu’s social and economic development during 1954-64 and the only Tamil politician to have scaled the summit of power in Delhi, failed to qualify as a Tamil character worth writing about.

The writers covered in the ‘Cultural & Literary Figures’ section range from Subramania Bharati and Pudumaipithan, giants of the pre- Independence era, to the triumvirate of Sundara Ramaswamy, Jayakanthan and Ashokamitran, along with chroniclers of the subaltern life from a younger generation, Perumal Murugan and Cho Dharman. Articles on a host of social and cultural issues pertaining to Tamil Nadu over the last decade are compiled in the third and final section.

The essays on major writers, rich in biographical information along with presenting an overview of each writer’s oeuvre, deliver splendid value through illuminating the exciting journey of modernist literature that Tamils have pursued since the early decades of the last century. The reader gets a vivid idea of the men— yes, it’s an exclusive parade of men—who have ‘educated our hearts and minds’ through their works of imagination, the contexts in which they functioned, their themes and concerns. It is not a coherent story, however, given the gaps and omissions in the narrative. It is best to read these essays as discrete profiles emerging from a collective history. Strangely, the essay on Iyotheethos Pandithar, a Dalit icon who pioneered the political mobilisation of Dalits in Tamil Nadu in the last decades of the 19th century, does not cover the nuances of his politics as extensively as his tryst with Buddhism.

Generally, the essays make an effort to collate a lot of available information and present it through a skein of narrative frisson, but the results are often mixed. The breezy narration also leads to conclusions that are not rigorously drawn, or often downright tendentious at times. For instance, the author’s claim that the Congress not getting a majority in the state Assembly elections in 1952 was ‘in some measure due to the DMK’s undermining of the Congress’ legitimacy’ is unrelated to known facts. Similar is the statement that Periyar’s support to the Congress ministry led by K Kamaraj (which, incidentally, the latter never sought) ensured ‘that the Tamil Nadu unit of the party was debrahminized’. About Ashokamitran writing well into his 80s, the author writes: ‘Consistency was the hallmark of Ashokamitran. That recognition was late in coming might explain his longevity.’ It’s the kind of faux insight that Chalapathy might have spared himself and the reader.

That said, this collection can be read for what it presents in an unprecedented format and style, but there is a definite need for more properly contextualised and rigorously argued accounts of Tamil Nadu’s politics, culture and personalities. After all, like translation, discourse too is permanently improvable.