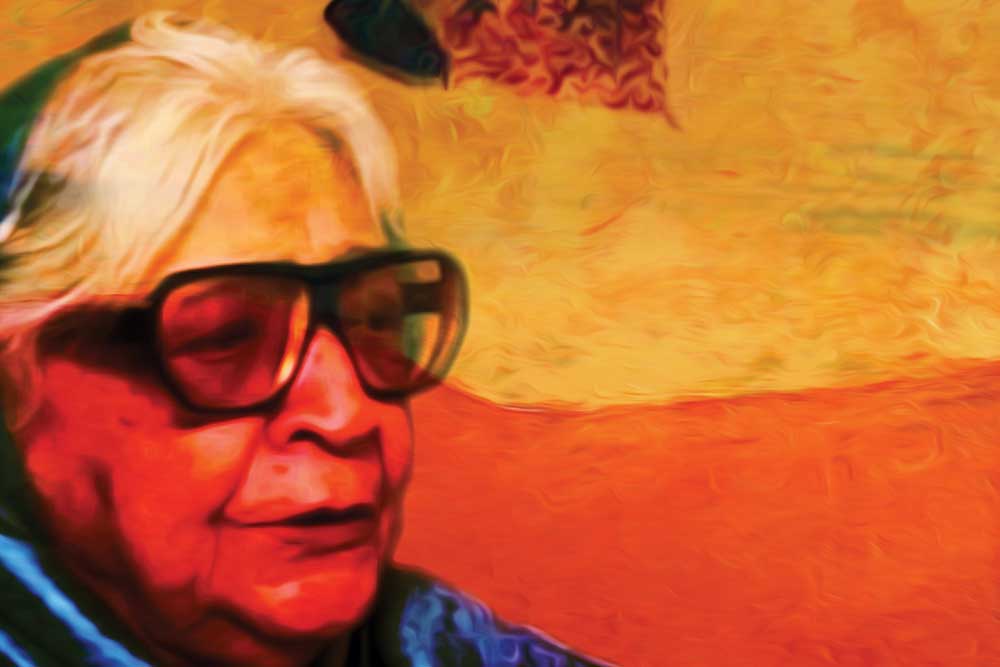 LIKE MOST GIRLS who reached puberty in those times, Krishna Sobti, the grande dame of Hindi fiction, too was told by her mother to replace her frocks with salwars. She refused to wear the salwar, a symbol of conformity, and chose the garaara, a flowing long skirt. A ceremonial dress in Punjab of her childhood, the garaara was not her symbol of rebellion but a statement of originality. It was her first commitment to something which later reflected in all her work and life. Frock to salwar was a rite of passage for girls in the village, but Sobti made it a point of departure with her garaara.

Sobti in her garaara may look like a dignified begum, but she is not a woman tied to tradition. In Zindaginama (originally published in 1979 in Hindi), her monumental account of a village in the turn-of-the-century British Punjab, one can spot Sobti in so many characters who are rooted in tradition and yet trying to create their original niches.

Shahji, the moneylender and the patriarchal axis of the village society whose job it is to maintain social and economic order, however oppressive it may be, finds himself in a situation where a man might have to revise his entire life. He is drawn to a low-caste girl less than half his age. His own moral lapse could be unpardonable for it is he who is responsible for the upkeep of the moral order in the village. Lakshami Brahamani falls in love with a Sayeed boy, an unimaginable social breach. Chachi Mehri, who lives with the family of Shahji, was the daughter of rich Sardars and married into another elite family. After the death of her husband, she fell in love with one Shah Ganpat and eloped. While she broke all ties with her in-laws, she failed to build another family as she was unable to bear her lover a child. Now living in Shahji’s haveli, she longs for her younger brother-in-law Sahib Singh.

These characters are not waging war against society; they are just modulating their lives to their existential longing. Zindaginama encourages its characters to engage with tradition in innovative ways, and teaches its readers to look at tradition and modernity through its author’s allegiance to originality.

That’s why Sobti does not build a narrative along the tensions between tradition and modernity. It is a recreation of a Punjab that Sobti saw in her childhood and imagined as an adult after it was lost to Partition. As a chronicle of life in a village in the Gujarat district of Pakistan, Zindaginama is an unabashed celebration of Punjabi rural life. The ‘nama’ form of narrative where she is able to insert so much of culture, history and politics of the early 20th century, recreates an old Punjab known for its lavish life and passionate living.

Sobti recreates in charming detail festivals such as Lohri, Baisakhi and Sangraand, and rural events such as Trinjan, where women spin, sing, gossip and eat together. She narrates the lives of various social types, especially the low classes such as Mirasiis, Kanjars and Saansis. She paints the Punjab of her times with several evocative items such as malmal dupattas, lehrias and saleemshahi juttis.

Shahji’s baithak is the place where the news from the outside world funnels into the village, from new British laws, to the unrest in Bengal, to World War I. It is also the adda where one can educate oneself on Punjabi lore. Discussions range from agricultural policies to the differences between the women of Lahore, Kabul and Basra.

Sobti’s recreation of Punjab is not just nostalgia. When she looks at the past, it is not for a mythical Punjab of plenty. She is tracing the roots of her own individuality

Despite its meticulous chronicling of the life in rural Punjab, Zindaginama transcends its form as numerous characters find ways to become more than their social types. Sobti’s recreation of Punjab is not just nostalgia for a lost tradition. When she looks at the past, it is not for a mythical Punjab of plenty; she is trying to trace the roots of her own individuality. So, you can see glimpses of Sobti in various characters who try to live their authentic selves.

Sobti has been an original in her literary work as well as life. At an age of 70, she did what could be unusual for a woman in India 20 years ago—she fell in love and got married. Sobti and Dogri writer Shivnath used to take evening walks together in a Mayur Vihar Society where both of them lived. When she had to vacate her rented flat, she just moved in with Shivnath. She did with quiet ease what could have broken out as a scandal in those days. And yet she is not a champion of modernity who wages a war on tradition. She is just original.

AS ORIGINAL AS Sobti, the protagonist of her other novel, Mitro Marjani, is a curious mix of tradition and modernity. Locked in a marriage without sex, Mitro is not afraid of pursuing her desire but at the same time performs her family role of a badi bahu with dedication. She rebels against the claustrophobic middle-class morality but abides by family values by selling her jewellery during a crisis. In another novel, Aye Ladki, Sobti sets up a dialogue between an old ailing mother and a single daughter to explore a woman’s social and personal selves from different subject positions. The generational back-and-forth of the dialogue between them becomes a device for Sobti to shine a light on desire and the social politics of gender.

Sobti’s own life seems to flow in and out of her literary work. Like her characters, she too knows how to live life on her own terms. She once refused to accept the Padma Shri. In the light of her refusal, those who returned their awards recently seem votaries of one political order agitating against the other. She refused it because she believed writers should not align themselves with authority. She has had the guts to challenge even the literary establishment.

She fought a long legal battle with another more glamorous, popular and powerful writer Amrita Pritam. Unfortunately, Zindaginama is known more for this controversial court case. Sobti sued Pritam for copyright violation for using the word ‘Zindaginama’ in the title of her book Hardatt Ka Zindaginama. Sobti, who argued that the word ‘zindaginama’ was coined by her, lost the legal battle that had gone on for decades. Many misunderstand Sobti’s legal challenge to Pritam as petty rivalry. She says it was Pritam’s refusal to engage with her on the matter that forced her to file a case. Khushwant Singh deposed in favour of Pritam, arguing that the word ‘zindaginama ’ has been used before in a literary context. Khushwant Singh quotes her telling the judge, “Yeh sab paise waale writer hain.” Sobti, who had lost a lot of money in the case, was perhaps upset at rich and powerful writers ganging up against her. Pritam used to count herself among close friends of then Prime Minister Indira Gandhi.

Zindaginama is a Hindi novel about a Punjabi village. Sobti translated Punjabi references into Hindi, which can convey the sounds if not the exact meaning of the language. An English translation has the difficult task of first recovering the original Punjabi which Sobti translated into Hindi. The translation by Neer Kanwal Mani and Moyna Mazumdar is smooth and flowing, but the soundscapes of the novel, so essential to the narrative, elude the English language if not the translators. The novel’s literary significance was clouded by the long legal case. This English translation gives Sobti’s Hindi classic a new life.