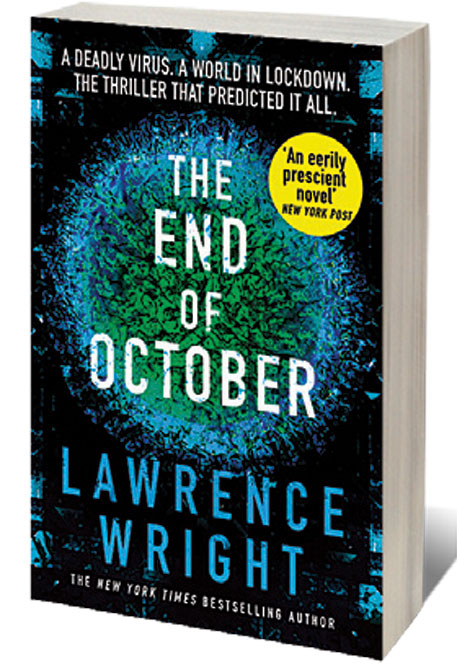 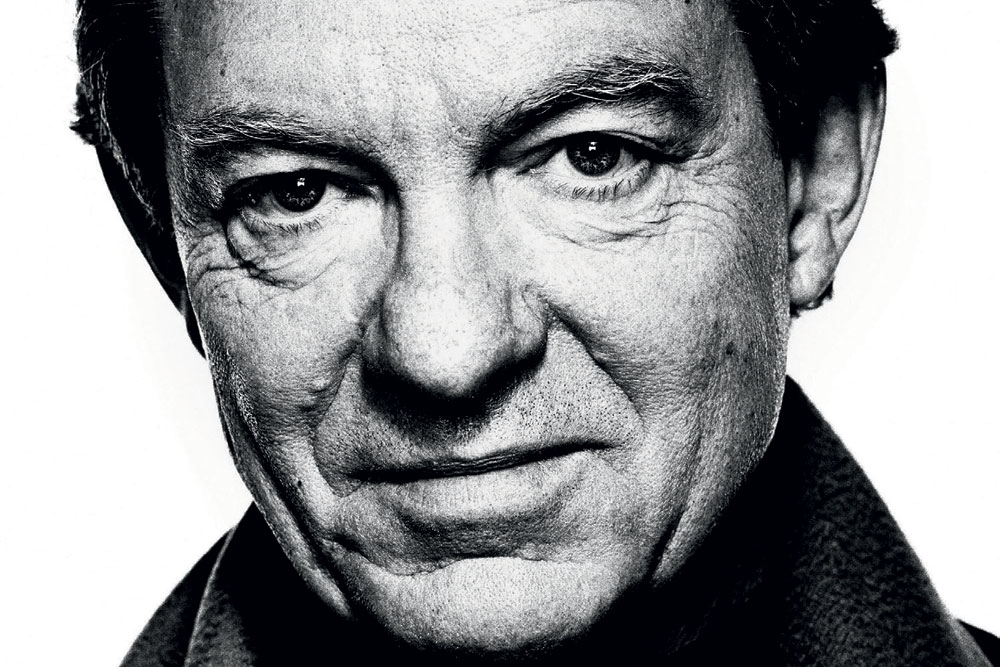 
IT IS NOT every day that one writes a thriller about a pandemic, which, within weeks, has become one’s reality. Lawrence Wright did just that. “It’s creepy. It’s weird,” he said in an interview. All he was doing, he said, was examining the world we live in, taking one of the issues and extrapolating where it might go. He decided to tackle an outbreak of a coronavirus and imagined what would happen and wrote the thriller with an epidemiologist-hero.

A strange spate of deaths from acute haemorrhagic fever in an internment camp in Indonesia brings Henry Parsons, a brilliant epidemiologist and microbiologist at the US Centre for Disease Control. The Indonesian health minister claims that nothing is wrong. Still, Henry goes anyway and finds soldiers guarding the site where they have herded young men with HIV. Inside, a team of doctors from Médecins Sans Frontieres are dead. The pathogen is christened Kongoli flu, a coronavirus like MERS and SARS, that attacks the young and able-bodied. ‘Their powerful immune system was killing them, just as in 1918 [Spanish flu] by filling the lungs to fight the infection but drowning the body in the process,’ notes Henry.

An international team of epidemiologists, assisted by the Indonesian government, swings into action while Henry is quarantined for a week. Then comes the shocker—his driver, a genial middle-aged man has flown to Mecca on a Hajj. Henry follows him to Saudi Arabia where his friend, Prince Majid, a doctor by training, is the health minister. More deaths force the decision to lock down Mecca. As more pilgrims die, others make a dash for freedom, leading to the sealing of the country’s borders. Now Henry is truly stuck. He has to find a way to get back to Atlanta, to his wife and his daughter and his adopted son (we discover his real identity later in the book).

Kongoli, of course, sneaks out, triggering a pandemic. National governments follow a trajectory that is now grimly familiar to us. That perspective is brought through Tildy, a Russian émigré who has risen to the position of deputy chief of US Homeland Security. In the daily meetings of the different arms of the government Tildy oversees, the predominant emotion is of disbelief. This is followed by hesitation (the World Health Organisation doesn’t want to call it a pandemic but has to when the virus rears up in Mecca), then panic as the government scrambles to contain the virus but fails. The conspiracy-babble gets louder—is the virus manmade; and if not, are the Chinese or the Russians behind it? This is followed by accusations of biowarfare (the US and Russia are fighting a proxy war through Saudi Arabia and Iran). Countries begin quarantining their citizens, which is perceived as an overreaction by some sections. Henry, who manages to find a submarine to take him home, and his team meanwhile are racing to find a vaccine. So far, the thriller’s predictions march alongside our real time Covid pandemic in an eerily prescient way.

Then the thriller diverges from our reality and moves at a rapid pace to a dystopian Mary Shelleyesque future of The Last Man. As the deaths pile up, economic turmoil and recession follow, as does war. There is panic among the public and the leadership and an inevitable meltdown of everything: community, governments, economy, life as we know it. The disconnect—between a Trump-like president and the leader needed to handle a pandemic—is portrayed effortlessly. During a live telecast, the president’s eyes begin watering until the realisation dawns on the viewer that it is blood.

What makes the thriller a literary one is how Wright deepens the moral question running through the story and in the protagonist’s life. Are people expendable to protect nature? That’s the question to which Henry has given different answers. We see that in his memories about how he and his former boss and mentor (a more cliched long silver hair, mad scientist/ecofanatic) tackled the answer. The ecofanatic mentor sees the question as posing a choice between saving the earth or allowing humanity to continue to wreck it. He chooses the former (which includes preserving other life forms like viruses other than humanity). For Henry, however, the answer changes after seeing the consequences.


Lawrence Wright, a staff writer for the New Yorker, is an excellent non-fiction writer. He has the knack of simplifying highly technical and scientific information without losing the nuances

It is in the portrayal of epidemiologists like Henry that Wright truly excels. The sincerity, the humility, the commitment to finding answers, the sacrifices and the danger Henry and his team face daily from an invisible enemy—these are what make the reader cheer for Henry. While no James Bond in the physical sense, Henry is the Bond of epidemiology. Others defer to him, he sees things in exciting ways, he is fearless, confident, thinks on his feet (swims to a submarine) and resourceful. His mysterious childhood and a stint in the government on biological weapons add heft and complexity to his character.

When we read a thriller, we take vicarious pleasure putting ourselves in the shoes of the hero or heroine but also knowing that the danger is in a fictional world. But reading The End of October is a surreal experience because there is no line between fact and fiction. We are, right now, in a pandemic. We don’t know what is going to happen next week or next month. Never before has the whole world been locked down, never before have such large numbers of people been quarantined (1.3 billion in India alone), never before have so many shops, restaurants and factories shut down simultaneously, and never before have so many people practiced self-quarantining and social distancing. So much information is thrown at us, and much of it is conflicting and incomplete. How do we think about the incidents and how they were handled by the governments we elected? How do we figure out which decisions were important for the outcomes?

The End of October helps us see the patterns in real time. Wright’s deep knowledge of epidemiology, bio-warfare and how states (don’t) manage global threats (The Looming Tower: Al Qaeda and the Road to 9/11 which won a Pulitzer prize) help him create a narrative that explains how to think about our Covid-stricken world.

WRIGHT, A STAFF writer for The New Yorker, is an excellent non-fiction writer. He has the knack of simplifying highly technical and scientific information without losing the nuances of the questions the epidemiologists try to answer about the virus. While the fiction element seems laboured in these sections—clunky dialogue with all this information—it does not jar with the reader because of our Covid reality. We have become used to scientific jargon over the past two months, watching and reading doctors and scientists educate us on combating the virus. His research for previous books on how the US administration functions help him convey to us how calibrated decisions are and how difficult it is to get them right. He also doesn’t make the mistake of following too many storylines and characters.

Here too, like in our reality with Covid, they don’t know what the virus is, where it came from or the full extent of what it does to the human body. Bats, birds, pigs and mammoths are some of the usual suspects, as are the bioweapon research labs. The questions that need to be answered to find a vaccine are told to us in simple prose.

The virus is portrayed as a highly intelligent antagonist: ‘highly virulent and well defended, moves fast… admire its perfection’. It can evade protocols, thinks on its feet, makes alliances (co-exists within the human body and recurs like shingles). A worthy villain for our James Bond.

The novel shows us what a worse alternative reality could have been had we faced a Kongoli-type virus instead of Covid. Henry and his family and everyone else live in a Hobbesian state of nature, a war of all against all.

That’s what I got wrong, said Lawrence Wright in an interview. Covid and the way populations and communities tackled the crisis shows us that people do help each other and they do obey the government, provided the state ensures the steady supply of basic necessities like food, water and shelter. That some will do what the administration ought to have done—sending money to bank accounts, organising food for the stranded migrants who were ‘forgotten’ by the Indian Government when the Prime Minister announced the lockdown with barely four hours’ notice. In apartment buildings, neighbours used WhatsApp to create a system to deliver food to elderly people who were living alone.

When we read a thriller, we take vicarious pleasure putting ourselves in the shoes of the hero or heroine but also knowing that the danger is in a fictional world. But reading the End of October is a surreal experience because these is no line between fact and fiction

But the US government behaved worse than I expected, said Wright. That statement holds true for India too where migrants fled the cities in thousands, were stopped at the borders, treated like prisoners, starved, beaten up when they protested and left to fend for themselves. Many began walking to their villages, which were hundreds of kilometres away.

Surprisingly though, Wright is not as adept at handling the geopolitics and relies on information dumps and clunky dialogue about the biowarfare programs. Vladimir Putin is an Ian Fleming SMERSH-like villain where the US is pitted against Russia, and the Saudis and Iranians are their proxies. No Al Qaeda or ISIS here—if the virus is manmade, those groups are not sophisticated enough to have made them, concludes Henry.

There are a few odd bits that jar a little. Why would an epidemic-hunter not wear protective gear before entering a quarantined area, and why would he take his driver inside with him and later forget to quarantine the driver? This is probably to move the story along (the driver sets off for Mecca the next day), but weakens the belief we have in Henry’s capabilities.

The novel is also far too long, making it lag as a thriller, particularly in the last third where the balance isn’t quite right between non-fiction and fiction. Some parts seem too hurried, and others, like the geopolitical elements, have too many information dumps.

It is hard to sustain the interest of a thriller-reader with a virus that does not have a corporeal presence, unlike, say, an alien or a piranha or a shark. The scale of the virus’ impact is global, and not confined to a country house, or a hospital or a street. Wright does an impressive job in tackling these two challenges through the focus on Henry’s life and how Kongoli affects his family. But for the most part, the thriller is pacey and thought-provoking. In this literary thriller, the virus steals the show.