The Love Story of Muhammad Ali Jinnah and Ruttie Petit: An Explosive Affair 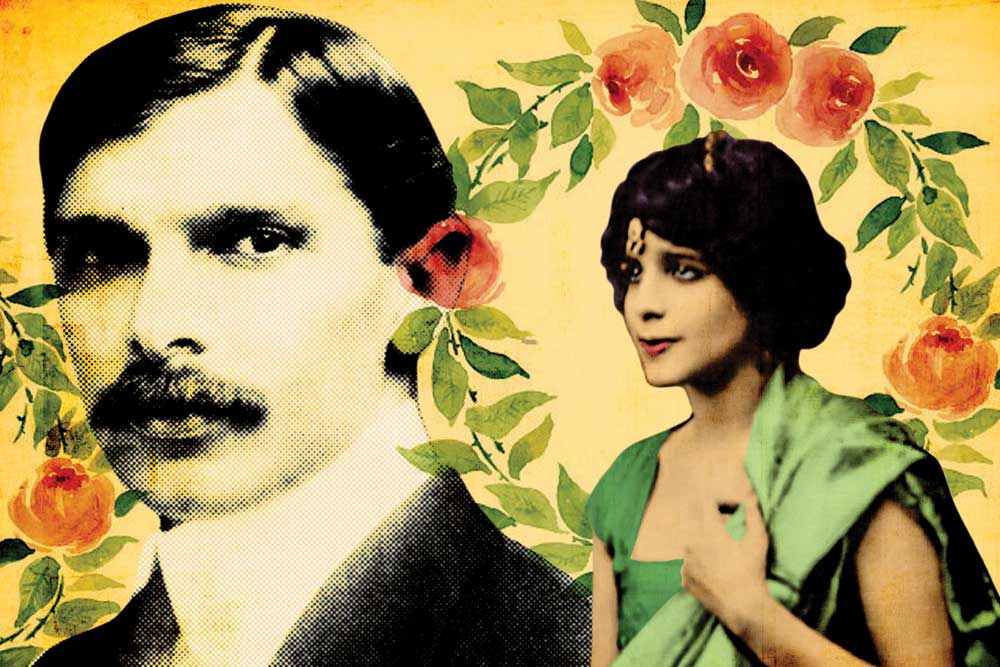 READERS OF NON-FICTION often get their share of disbelief in biographies, many of them so much larger-than-life, they surpass fiction. In a revealing new biography, Mr and Mrs Jinnah, veteran journalist Sheela Reddy unravels the story of a brilliant couple who defied convention to reach the heights of political and social attainment, only to find their marriage floundering on the rocky path to Independence. Here you have a man who dreamt up a new nation, a beauteous Parsi princess with an unconventional dark side and a shadowy political marriage that ended in a flawed victory for one and devastating tragedy for the other. The book has all the ingredients of an Indian Downton Abbey, offering an envious insight into the legendary wealth and foppish lifestyles of Bombay’s privileged mill owners in the early years of the century. The narrative focuses on the fragile and doomed relationship between the protagonists with politics taking a backseat to their social interactions.

There are several biographies of Pakistan’s founder, Muhammad Ali Jinnah, whose life has been dissected and in some cases deified to such an extent we are in danger of losing the true essence of the man. The Quaid-e-Azam would have been appalled at the strictures governing Pakistani society today, for even when his political star was on the ascendant in the 1930s, he was, ‘Fastidious about being associated with Muslim backwardness and their many taboos and orthodoxy and superstitions, he refused to sport the outward identity of a Muslim… he not only defiantly dressed like a British gentleman but openly smoked, drank, ate pork and, more seriously, insisted on putting his sister (Fatima) in a convent boarding school in the face of stiff opposition from his own Khoja community,’ writes Reddy. Jinnah’s Westernised attitude to women is reflected not just in the professional education he insisted on for his sister and daughter, Dina, but also in the freedom and non-conformity his wife Ruttie enjoyed—daringly draped in her trademark transparent saris and backless blouses, shocking the Muslim majlis by often being the only woman in a room full of orthodox politicians. In later years, Ruttie took to leaving Jinnah and her daughter behind to travel alone to Europe for months on end, often experimenting with drugs, according to friends, to combat her depression.

Not much has been written until now of Mrs Maryam Jinnah nee Ruttie Petit the daughter of the fabulously wealthy Parsi baronet Sir Dinshaw Petit and the ten tempestuous years of her marriage to ‘J’ as she called him. Based in part on a trove of hitherto unreported letters exchanged between Ruttie, Sarojini Naidu and her daughters Padmaja and Leilamoni, Reddy draws the portrait of a child bride who ‘was enchanting, of course, and delightfully informal, lively, high-spirited and full of jokes, and the toast of high society for her beauty and breeding but she was hardly Jinnah’s type’. Nevertheless, she was the only woman who got under his skin. His first marriage was a formality, engineered by his mother to his cousin Emibai, who succumbed to cholera a few months later while he was in England pursuing his studies.

Thereafter, Jinnah kept to his aloof self until Ruttie, whom he had known as the child of his friend Sir Dinshaw, metamorphosed into a dazzling teenager one summer in Pune. Jinnah took his suit to Sir Dinshaw when Ruttie was 16 but the baronet was so appalled—not least because of the 28-year age gap between them—he took out a court injunction forbidding Jinnah from meeting his daughter. Ruttie bided her time till she was legally of age and then walked out of her palatial home, Petit Hall, to convert to Islam and marry Jinnah. She took the name of Maryam and was granted a meher of the then princely sum of Rs 125,000 by Jinnah on their wedding. The Petits found out about their daughter’s wedding only the following morning in the Bombay Chronicle on April 20th, 1918, when all hell broke loose.

THE MARRIAGE WAS doomed from the start. The complete social ostracism Ruttie suffered at the hands of the influential Parsi Panchayat and the severing of ties with her parents was painful, but Jinnah’s lack of attention towards her and his all-consuming obsession with Muslim politics left her increasingly alone and depressed. His difficult relationship with Gandhi eventually caused many followers in the Muslim League to leave the party, and in the dark days when it looked like his career was over, he withdrew completely. ‘Loving Jinnah with all the passion of her romantic soul did not blind her to the fact that he had grown even more remote … at the height of their courtship she had found him elusive with his unsentimental and silent ways leaving her with a deep yearning, this ‘medley of wild excitement and cold depression,’ as she described it,’ writes Reddy.

The bulk of the book consists of correspondence between an increasingly distraught Ruttie and her best friends Sarojini and Padmaja Naidu and can be a little tedious in parts as some of the letters don’t move the story forward. Indeed, much of the action happens offstage, so to speak, and the recounting of Ruttie’s tragic death is a bit of an anti- climax following the poignant letter she writes to ‘J’ on leaving him: ‘I love you —and had I loved you a little less, I might have remained with you. Only after one has created a very beautiful blossom one does not drag it through the mire… I have loved you my darling as it’s given to few men to be loved. I only beseech you that our tragedy which commenced with love should end with it.’

Ruttie took an overdose of sleeping pills, according to her close friend Kanji Dwarkadas, and died on her birthday on February 29th, 1929, at the age of 29. Jinnah was shattered. He broke down at her funeral in a complete departure from his stoic, emotionless demeanour and later again in the privacy of his home. ‘The death of his wife was not just a sad event,’ says his friend Kanji, ‘he took it as an act of God, as a failure and personal defeat in his life.’ Jinnah became increasingly bitter as time went by, politically isolated and virtually friendless, eventually re-emerging as a communal figure who helped usher in the bloodiest chapter in the Subcontinent’s history. Would he have become as ruthless had Ruttie been by his side? Friends of the couple believe she would have been a restraining influence, her friendship with Gandhi and the fact that she had a liberal upbringing acting as a counter to his communalism. Ruttie was the only one who could tease, influence and cajole Jinnah into doing something, and her demise would cast a long shadow on the creation of Pakistan.

Told against the momentous events leading up to 1947, Mr and Mrs Jinnah, takes us into the private lives of two people whose personal tragedy foreshadowed a cataclysmic one for India. Would history have been different if she had not been punished so severely for marrying the man she loved and had he been less consumed with politics and more solicitous a husband? In a rare admission, Jinnah says he should not have married Ruttie, ‘she was a child’. The book starts like a Mills & Boon romance but turns into a Shakespearean tragedy with echoes that still resound today. It’s a good light read for a weekend with the potential for a movie or a mini- series—but probably not in Pakistan, where the sanitised version of the Jinnahs would be somewhat at odds with this book.