The Legend of Sharmila

And the dynamics of Manipur 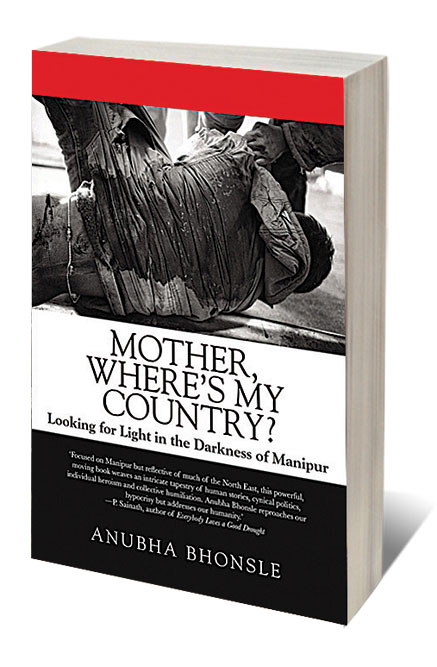 There are books that update a telling, and there are others that offer fresher insight. Mother, Where’s My Country? by television journalist Anubha Bhonsle attempts both as it travels the roiled psycho-geographical territory of conflict and policy-callousness that is Manipur. As centrepiece she holds to narrative scrutiny a face from this Northeast Indian state best known to most South Asians after that of MC Mary Kom (alas, for many the face of actor Priyanka Chopra who reprised the gutsy boxer as Bollywood shtick).

Irom Sharmila, the perplexing yet simple icon of fortitude is a tough act to follow. This lady has since late-2000 been fed by the government through a nasal tube. She has since 2001 been rearrested annually on the charge of attempting suicide. As India’s living martyr she is a mirror to India’s failings, and the hypocrisies of its democracy. She is a reminder of the necessity for peace in Manipur, where a quest for identity and dignity has from the 1950s spawned aggressive nationalism. And which later evolved to armed conflict that is today a quagmire of nearly 40 armed rebel groups, most well past their ideological prime; behaviour by army, paramilitaries and police that count as atrocity; the Armed Forces (Special Powers) Act, 1958 that papers over such atrocity as being intrinsic to national security— a legislation that Sharmila demands be lifted before she eats—and conflict management that has brought to the fore fractures. Recent peacemaking with the biggest Naga rebel group that could well turn into an unmaking of Manipur is one such impulse.

To this palette of confounding politics and human wash Bhonsle lends her empathetic brush.

Bhonsle’s rendering of Sharmila occupies a different space from another Sharmila-centric work, the stolidly feminist, thesis-like storytelling of Burning Bright: Irom Sharmila and the Struggle for Peace in Manipur by Deepti Priya Mehrotra. Bhonsle’s work engages when she addresses the mass killing of civilians by security forces at the village of Malom that moved Sharmila to undertake her epic protest, when she moves into the point-of-view space of those who watch, and watch over, Sharmila, of those who burn at the death of a parent, a sister, a child.

IROM SHARMILA IS A REMINDER OF THE NECESSITY FOR PEACE IN MANIPUR, WHERE A QUEST FOR DIGNITY HAS FROM THE 1950S SPAWNED AGGRESSIVE NATIONALISM

Many events Bhonsle writes of are known to those who remain engaged with Manipur, but it is always moving to read of Malom and its victims, of Thangjam Manorama’s brutal death at the hands of security forces and the lament of her family and Manipur’s women, of other examples of cynical death-dealing that makes Manipur the hell it has become.

While the dynamic of Manipur makes for an inherently powerful narrative, Bhonsle attempts to animate it beyond numbers and names, highlighting the inhumanity of governance and rebellion alike. This she portrays alongside the courage and abiding hope of so-called common people whom the state and ‘non-state’ alike claim to speak and fight for, who seek nothing more than a better life but sometimes face death and, almost always, despondency wrought by prolonged conflict.

And, while Bhonsle’s acknowledgment to associates and mentors are numerous, there is an astonishing lack of acknowledgment to historical sources and background except for slivers towards the end of the book. Some parts seem familiar in tone and structure. It reminds me of a book by the former police officer Ved Marwah in which he offers this creative acknowledgement of others: ‘I have liberally borrowed… but have cited only a few, to avoid the risk of quoting them out of context.’

Perhaps this is uncharitable to a storyteller we should unequivocally welcome, but flags are sometimes necessary even for those who care so very much.