The Legend of Kuttanad

This many-layered novel, about a folk-hero and his fabulous moustache, examines the nature of story-telling— how people, animals and places can be kept alive through the narratives built around them 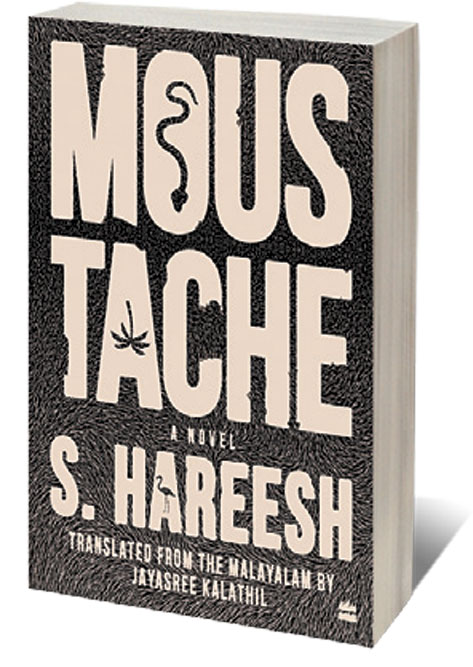 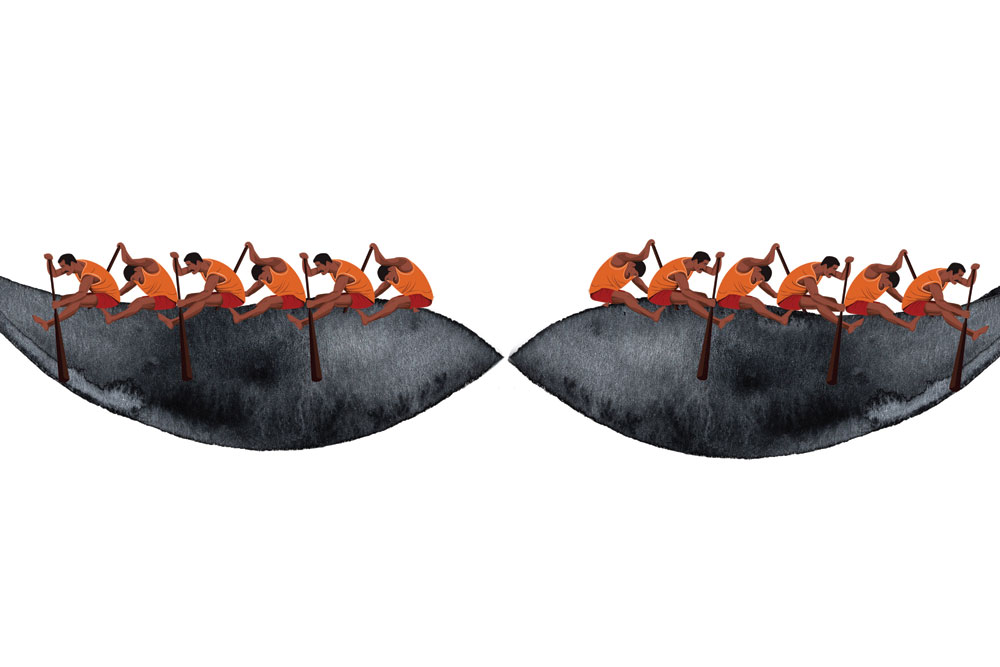 
MOUSTACHE (originally published as Meesha in Malayalam) written by S Hareesh opens with the suggestion that the pangolin—the animal known in Kerala as eenampechi—is ‘somewhat stupid’, even though it is often regarded as a divinity. A man who has picked up a ball-shaped pangolin for his children hears it calling out to him. Shortly after this, we are told about the snakehead murrel, called Paappu by the region’s fishermen—‘the king of the numerous canals and waterways around Neendoor and Kaipuzha’—and about how a boat darts out of this fish’s path even though the person rowing it doesn’t know what has happened.

Already, in the novel’s first two pages, there is a powerful sense of interconnectedness between living and non-living things and their environment (the watery Kuttanad terrain, where below-sea-level farming is carried out and complex caste politics are at play). This will grow more pronounced as the story continues.

I hadn’t read Hareesh’s previous work, but a similar vibe runs through Lijo Jose Pellissery’s 2019 film Jallikattu, for which Hareesh wrote the screenplay. In that film’s opening sequence, a montage of close-ups of people in stages of sleep or wakefulness is followed by dawn images of insects going about their day’s work and a panoramic long take of the rising sun; the background score is made up of sounds from the natural world, including the bellowing of the runaway bull whose pursuit will fuel the story.

Moustache is also about an evasive, enigmatic being: a young man named Vavachan, from the lower-caste Pulayan community, who acquires larger-than-life status after appearing in a local play with a big moustache on his face. There is something hypnotic and primal about the passage where Vavachan, made up as a fierce policeman, scares the play’s unprepared audience: it is like a description of the first ever performance of a new art form, or the story of the Parisian viewers terrified during an 1895 Lumiere Brothers screening. This visceral quality will recur elsewhere in the novel, which segues from being a near-anthropological description of a region and its people, set mainly in the first half of the 20th century, to something more allegorical. As Vavachan (who becomes known as Moustache) moves through this landscape, fantastic legends come up around him; people feverishly exaggerate their sightings of the enormous moustache; his presence is even incorporated into incidents that took place, if they took place at all, much before he was born.

What Vavachan himself wants is to go to Malaya—and presumably to a different sort of life —having been inspired by two travellers whom he once met. Later he searches for a woman named Seetha, with whom he had a brief, interrupted encounter, and this paves the way for the Ramayana allusions that flow under the book’s surface. But is Moustache a version of Rama or Ravana? It depends on how you look at the story, and on who is doing the telling. Many oral legends are retro-fitted onto the Moustache mythos, which echoes the way our ancient epics acquire new form as they pass from one time and region to another. We are told, for example, that in a place called Kainadi, Moustache is not as imposing or invincible as he is in other lore; he is bettered by another powerful figure.

This is not an organised or linear narrative: it coils back on itself, makes detours; there is a reference to a peripheral character, and we are led down a sinuous new path to learn something about this person’s story. And throughout there is the non-human world humming away in the background, often in startling ways. When a toddy tapper momentarily places a live Chemballi fish in his mouth, the fish ‘remembered the history of its kind and of humankind, and deciding to die valiantly, it wriggled, making the Chovan inadvertently open his mouth. It slid down his throat into his stomach’. A leopard, confused by a man performing a martial dance, backs away, and this causes embarrassment for leopards in general. Tapioca plants, their branches raised to the sky, resemble preachers. A crocodile, overhearing a conversation between humans, realises that his pregnant wife has been captured and killed, and that this leaves him as the Last Crocodile. Sentience is equally ascribed to non-living things: a river is lost in thought about the thousands of years before people first came to its shore.


Some of these descriptions invoke the mode of magic realism, which is generally perceived as being out of fashion today; the ghosts of such writers as Gabriel Garcia Marquez loom over this book, as in the early passage where we are told—in a bit of portentous foreshadowing—that ‘at that precise moment something had been set in motion, and [Paviyan] and his son Vavachan would soon be tricked and sent astray’.

In a casual writer’s hands, this mode is privy to lazy, ‘anything goes’ storytelling. But Hareesh is not lazy or casual (if anything, it sometimes feels like he has too many balls in the air), and the Vavachan legend is explicitly deconstructed in framing interludes where a present-day narrator tries to impress his little son. This provides important context for the book’s magic realism. A theme here is the nature of narration itself: how people (or animals, or plants, or landscapes) get new meaning and extended life when stories are told about them. This is as true of Moustache and other humans as it is of the coconut tree that recognises a person by his voice; or the dying sardine in a basket of freshly caught fish, feeling guilty because it was he who had led the school to the water’s surface.

The scope of Moustache is audacious. It is as if S Hareesh decided to do a condensed version of the book that contains all things, past, present and future

Such descriptions, however strange, feel organic to a story about all life being interconnected in too many ways to count, and about ecological decline. When the narrator tells his son about Vavachan/Moustache staying in a canal for a couple of weeks because fish and frogs had laid eggs in his moustache and he wanted to wait for the eggs to safely hatch, there is a clear link with the sad story of the crocodile whose eggs didn’t get a chance. That captured pangolin in the book’s opening scene may well be calling out to its brethren in China, where the mercilessly traded animal is believed to have played a part in the spread of the Coronavirus.

In one counterintuitive but sharply observed passage, the narrator, after hearing that his son has been told ghosts don’t exist, says: ‘Don’t they realise how dangerous it is to fill the minds of small children with rationalism? Rationalism […] completely kills a person’s imagination and instincts.’ He tries to explain to the boy how different things were in the old times—no electricity, so much flora that even the moonlight couldn’t get through. Here is an elegy for a time when there was a greater sense of wonder and the world seemed more magical than it does today. And an argument, too, for the importance of fantasy.

Though this isn’t explicitly stated, the Vavachan story suggests that wonder and imagination are the things that can help us overcome the many discriminatory lines drawn in our world. They might enable a lower-caste man to see himself as equal to others, and for people to look upon him as a hero or an imposing figure. The creative process—working with the drama troupe—changes Vavachan: earlier, like others in his family, he was accustomed to hunger, but now ‘he would no longer be able to live without food or draw energy from the wind or the sun […] now he was looking for the road to a place where he imagined kanji was plentiful and always within reach.’ In putting on a new face, he has been transformed, and he is in turn transforming the community around him. But there is also a caution about the limits of fantasy: the myths that grow around Vavachan imprison him in some ways, as they do Seetha and other people. (When Moustache and Seetha are ‘reunited’, she behaves like a mythological character trying to break free of the grand songs and legends about her.)

Even if its principal mode is that of exaggeration, surrealism or fairy-tale, Moustache is steeped in the realities of a land, its history and its people. The scope of this book is audacious. It is as if the author decided to do a condensed version of the ledger maintained by the god of death, which is referred to in the narrative: the book that contains all things, past, present and future. There are many discoveries to be made for a reader unfamiliar with the setting and culture. At one point, we are told that a boatman would not be able to get across these fields ‘even if he rowed till the end of his life. They had no end, like the earth itself’. It feels strange to read this if you think of Kerala as a sliver of a state, but as translator Jayasree Kalathil says in her note, the more she travelled within Kuttanad, the more it revealed its uniqueness, upsetting the tendency to see Kerala as a limited geographical area uniform in culture and language.

So vast is Hareesh’s canvas that it can be exhausting just to keep pace with it. (Jallikattu notwithstanding, a closer cinematic analogy may be with Terrence Malick’s wide-ranging, very abstract film Tree of Life.)Partly because of its unusual structure, partly because there is so much happening on almost every page, Moustache is not an easy read. Around the midway mark, as the story moved away from Vavachan and to a range of other characters, the book became a bit of a slog for me, some passages as hard to negotiate as the countless canals and waterways of the terrain; it was like drowning in detail. One feels sheepish suggesting that a story, being deeply rooted in a specific place, doesn’t translate easily, but at times I felt the enormity of Kalathil’s task as translator, trying to be faithful to the original while also explaining things to a new reader.

And yet, writing this review many days after finishing the book, many passages still linger in my mind, more vividly than when I first read them. I think Moustache works best if treated as a collection of tales and vignettes, linked—sometimes tenuously—by the device of a shadowy figure. As such, it may be advisable to read it not in two or three quick sittings but over a long period—to return to it and dip into it for the atmosphere, for the presentation of a living, throbbing world in all its shades, and a reminder that ‘each of us is made of the stories told of us’.