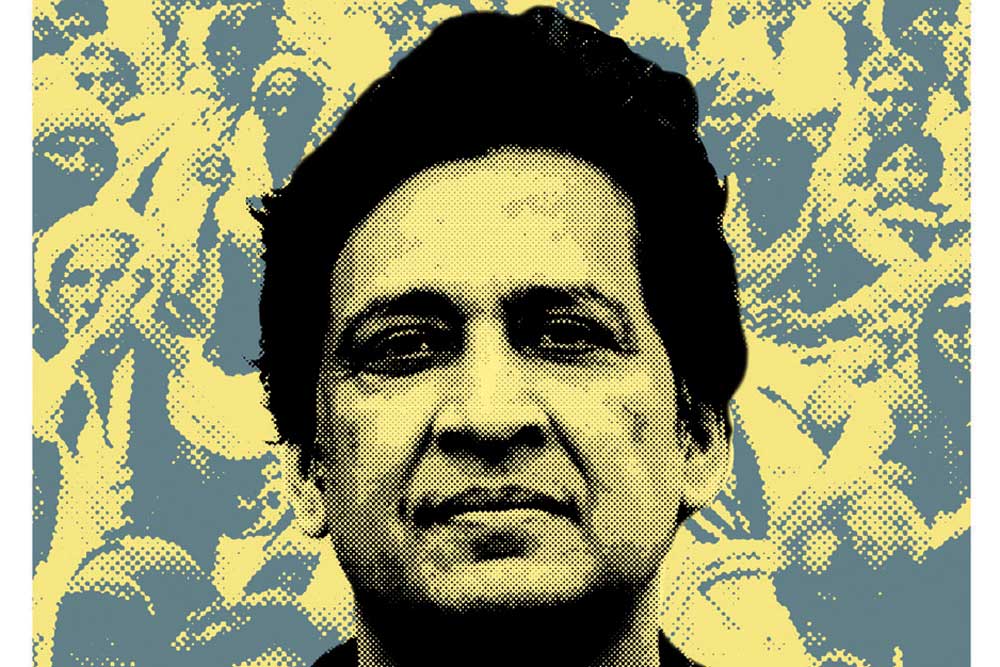 IN ALBERT CAMUS’ immortal words, ‘the purpose of the writer is to keep civilisation from destroying itself.’ Tabish Khair shoulders this responsibility with impressive fortitude. Nuanced and insightful, his fiction shines a light on the inner workings of a world mired in Islamophobia and intolerance. It raises difficult, and necessary, questions about the powerful influence religion exerts on the Indian social fabric.

Khair’s latest novel, Night of Happiness revolves around Anil Mehrotra, a successful businessman, and his long-time employee, Ahmed. Anil runs an export- import business based in Bombay. Ahmed is his right-hand man. Anil appreciates his employee’s dedication. The only holiday Ahmed avails is Shab- e-baraat, a festival he says he celebrates with his wife, Roshni. She makes delicious maida ka halwa (whose recipe she picked up from Ahmed’s mother before she passed away) to mark the occasion. It is on Shab-e-Baraat that Muslims pay tribute to the memory of their ancestors. Since the night ‘links the past to the future through our present’, Ahmed considers it a night of happiness.

When Ahmed is dragged into office on the sacred day to finish some urgent work, Anil offers him a lift back home. Ahmed invites Anil into his house and things begin to unravel. Roshni, Ahmed’s wife, is nowhere to be seen. Ahmed tells Anil that she observes the purdah. He disappears into the kitchen, has a whispered conversation, and on returning to the living room, urges Anil to taste the halwa Roshni has prepared. Anil is confused. There is no halwa on his plate or Ahmed’s. Yet, he is forced to sit there and watch Ahmed savour a plate of ‘imaginary’ halwa.

Anil is a man who ‘works with known facts.’ The facts at his disposal are these: Ahmed was born in a small town in Bihar. He lived there with his mother, worked as a tourist guide, married Roshni, and moved to Bombay with his wife after his mother’s death. But the facts refuse to add up all of a sudden. Ahmed’s irrational behaviour throws Anil’s ‘world out of gear’. He fears that the reliable, reasonable employee he trusted all these years is not who he thought he was.

Khair skilfully exposes Anil’s flawed liberalism here, urging readers to question their own prejudices and irrational fears about the other. Anil projects the image of a progressive thinker, a generous employer, an urbane soul who gets along fine with people of different faiths. But the ease with which he lets his internal needle of suspicion swing in Ahmed’s direction is laughable. Though blind to his own prejudices, Anil is remarkably clear-eyed when it comes to the pretences of the people around him. He writes off his wife’s flaky literary soirees and the social climbers who attend them with the sarcasm they deserve.

Determined to find out the truth about Ahmed’s wife, Anil hires a detective to dig up his employee’s past. At every stage of the detective’s investigation, Anil obsesses about (fundamentalist) Islam and Ahmed’s connections to it. ‘Is there any indication that Ahmed might have had Islamist sympathies or met people like that?’ he asks the detective, feeling embarrassed to spell it out. Ahmed is a hard (Muslim) man to slot. And this is the root of all of Anil’s suspicions that ‘return to him despite his better self.’

The detective retraces Ahmed’s journey from Bihar to Bombay to Surat, and back to Bombay again. The painful secret that he reveals is intricately linked to the 2002 riots in Gujarat. In a telling moment, Anil confesses that the violence unleashed against the Muslim community is only a hazy memory to him; he has to look up Wikipedia to gather the facts about it. While the riots ripped apart Ahmed’s life, Anil has had the luxury of staying blissfully oblivious to them. It is clear that even if the two men share a country, they live in two entirely different worlds.

Khair avoids stylistic pyrotechnics in his storytelling. Though readers may not be dazzled by his language at all times, the novel’s quiet intensity is hard to resist. This haunting tale of memory, loss, grief, and a nation’s collective madness will stay with you for years to come. Read it!