A graphic tribute to Indira Gandhi 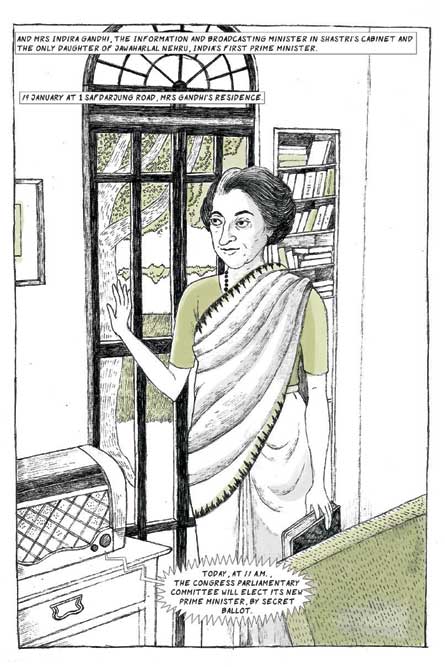 INDIA IS ENJOYING a graphic novel renaissance—they are tackling the new as well as re-inventing the old. Indira, written by Devapriya Roy and drawn by Priya Kuriyan, takes on the life of the country’s original Iron Lady.

To the French, comics are classified as the ‘ninth art’. Hegel began this aesthetic classification and theorists kept adding to this: for example, cinema was included as it was ‘a superb conciliation of the Rhythms of Space (the Plastic Arts) and the Rhythms of Time (Music and Poetry)’. This ‘conciliation’ also explains the appeal of graphic novels. They are often at the junction of journalism, architecture, photography and film-making— drawing on all their strengths, yet preserving a certain character unique to the medium. Such an approach is necessary for Indira Gandhi. After all, she had an exceptionally fraught personal life and she played a crucial role in the making of modern India.

We start with a cinematic opening sequence: January 19th, 1966, with Indira Gandhi on the threshold of greatness. When we first see her in a full page portrait, she has her finger in a book as a bookmark, as if she would turn back to her reading once the panel is ‘over’.

Delhi’s throne is vacant, and the Congress Parliamentary Committee is about to vote her in as Prime Minister. The day is stretched out to include a drive to Parliament with detours at Rajghat featuring flashbacks such as the teenaged Indira making orange juice for the Mahatma to break one of his fasts with.

After her coronation comes a crowd-pleasing splash page of Indira out in her Ambassador. Cheering her on in the crowd are this book’s two authors. This meta-textual device sets the tone.

The conceit is that the story is told through a student, a young Nepali girl, Indira Thapa, who has been asked by her teacher to write an essay on her namesake. She befriends the artist, who was also named after ‘Mrs G’; the process of putting together the graphic novel is referenced while the girl writes the essay. The resulting narrative is a hybrid with prose interspersed with comics. While the chapters do talk to each other, I found the mental gear-changing from prose to comics and back off-putting, and so read all the comics pages first and then re-read everything ‘properly’ only after that.

Roy and Kuriyan’s talent is locating illuminating moments and then stringing them together like pearls on a necklace. A three-year-old Indira has to grapple with her principles—in the light of the Swadeshi Movement, should she burn her foreign but favourite doll? She does it eventually in an evocative sequence: ‘something changes inside her forever… nothing valuable can be attained without sacrifice’. The canvas has enough space in its broad sweep of history for a girl and her doll.

The story is visually compelling throughout. Kuriyan’s hand-drawn pencils are enlivened with flourishes such as a huge wimmelbild (hidden picture book) showing the run-up to her marriage with Feroze Gandhi. Or the deep cyanosis blue of the German Alps, where her mother passes away. For the 1971 war, often only her sari is in colour while the rest is black-and- white, showing how her power both illuminates and dominates the world. In a tense meeting at the White House, Nixon is a mass of angrily scribbled dark lines, while the red of Indira’s sari stands out in defiance. Eventually the red and green combine to form the flag of Bangladesh.

The story can’t resist lapsing into a hagiography (we are informed that during the Emergency, ‘smugglers and black marketers are apprehended, prices fall, trains run on time’ though, ‘the soul of India is dying’). Still, by the final act, where we know what will happen but can only turn the pages powerlessly, the narrative has attained momentum. The assassination and its aftermath, viewed through the eyes of her grandchildren, is moving. Indira is a triumph for the medium.