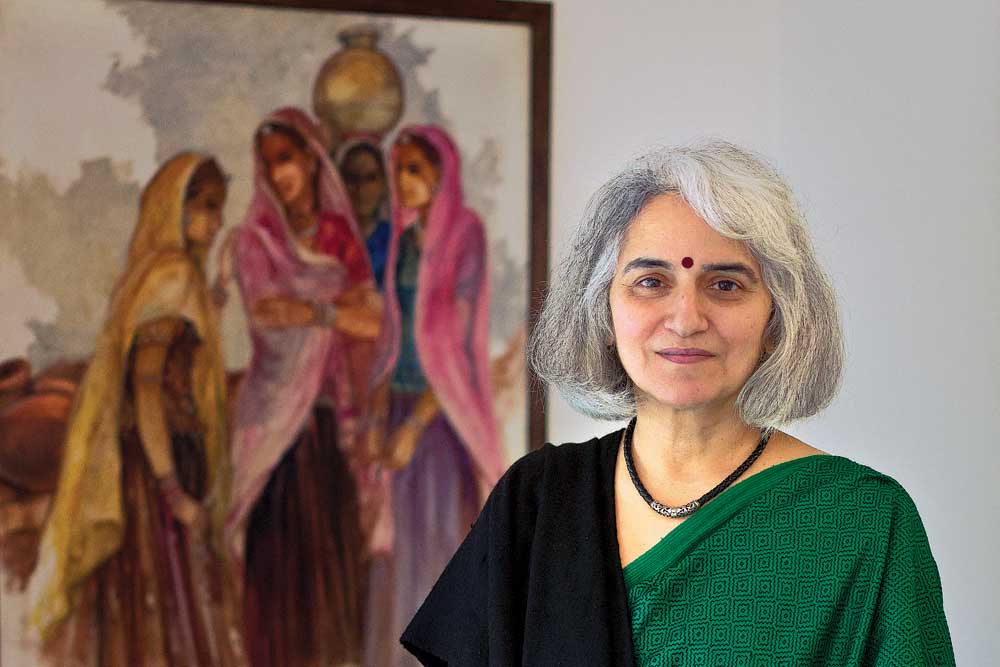 FOR THE SERIOUS academic historian that she is, Nayanjot Lahiri, author of works as stellar as Ashoka in Ancient India and Finding Forgotten Cities: How the Indus Civilization was Discovered, has reason to contend, perhaps with a slight sense of guilt, that her latest work is a “light-hearted” one. Or perhaps more than guilt, it could be her way of justifying a break with the discipline of writing only watershed books brought out by exclusive academic publishers. Time Pieces: A Whistle-Stop Tour of Ancient India (Hachette; Rs 399; 240 pages) draws inspiration from the books she had come across when she was pregnant with her son, especially those by Dr Theodor Seuss Geisel, popularly known as Dr Seuss. She was also motivated by the works of classicist and cult figure Mary Beard and the Horrible Stories children’s book series that offer a medley of tongue-in-cheek comments on history without compromising accuracy.

And to prepare for writing this one, Lahiri had to “loosen” herself up—she found a way to do so by teaching a new course at Ashoka University, where she is a professor of History. The course was on ‘love and laughter in antiquity’ that covered ancient China, Iran, India, Egypt and so on. This book, an easy yet illuminating read on themes of her choice about ancient India, is filled with insightful information and interpretations. She peppers her chapters—10 of them—with anecdotes from politics, literature, world history, music and so on, most of which are subjects right up her alley.

In the first of the 10 chapters, titled ‘Journeys’, Lahiri traces the generations- long migration of hominins from Africa to West Asia and then eastwards to Tamil Nadu that she states pales in comparison with the tours of others in ancient history that are mentioned in the book: Alexander of Macedonia, Megasthenes and Xuanzang. While she captures all these journeys in the style of a quintessential historian, she also explains the significance of mass movements of people—for whom we don’t even have names—like those from Africa to Attirampakkam in Tamil Nadu, which she describes as a “one-way saga” where migrants are also settlers, unlike those who come and return either with loot or knowledge. The nuances of why the past is different from today and why the ancient past is all the more different are well narrated here for readers to comprehend how journeys and their purposes have evolved over time. Yet, some aspects coexist. She also talks of transformative journeys of ancient periods—the time period of Lahiri’s consideration stretches from 1.5 million years ago to the end of the last millennium when medieval history begins. And therefore, it also includes the legendary tour of Ashoka, her favourite historical figure, from Pataliputra in Bihar to Kalinga in Odisha, and his epiphany at the end of it.

The next chapter, about art, is also a vignette from ancient history that she contextualises in her very personalised way as a historian. While elaborating on this, she dwells on early Indian artists who were forest dwellers, analysing their works on rocks that have survived in the ‘heart of India’ and lie between the Gangetic plains and the Deccan. She also hops to the naturalistic cave art of Europe from the latter part of the Ice Age to place the Indian version, known for its X-ray style depictions, in perspective. Lahiri’s familiarity with such art in various parts of India— Bhimbetka and Udayagiri, both in Madhya Pradesh, for instance—contributes vastly to the narrative. She brings in Wagner and TS Eliot to underscore the “continuity” of certain cultures, notwithstanding the sweeping changes of modernity.

The award-winning scholar uses modern references, such as Mahatma Gandhi’s cleanliness mania, to broach the topic of hygiene in ancient India. Using the witticism that the Hindu Right might say ‘Gandhi was full of shit’, the historian delves into one of the great man’s key concerns: obsession with personal cleanliness and indifference to public hygiene. Lahiri goes on to posit that we didn’t inherit this habit from ancient India. In Harappa and Mohenjodaro, homes had elaborate arrangements to flush out solid and liquid waste and several of them had bathrooms and toilets next to each other, as in modern homes. As a historian, Lahiri thinks that the caste system may be traceable to those cities of India where special workers were needed to clean others’ dirt. It is a chapter full of details of the tools used for cleaning 4,500 years ago. The author also covers religious ablutions and offers perceptive comments on excreters having been divided into ‘wipers’ and ‘washers’ for centuries. Cheeky comments abound.

In a chapter on food, the author busts, with quotations from texts including the Mahabharata, myths about ancient Indian diets. Though she isn’t combative in her tone, she writes generously about the meat delicacies that Yudhishtira, the eldest Pandava brother, had once served his guests. “Lakshman and Ram wouldn’t have hunted deer if it was not for eating it,” she says with a smile. While she quotes other old texts in the book, she also narrates the story of how Ashoka transformed his diet, turning into a vegetarian. ‘Environment’ is a chapter that calls for a close read because it talks about a past that found harmony in the ‘idea of connectedness’ of man and animal rather than a “divided one”.

One of the most exciting chapters in the book is about love in ancient India that she says lays emphasis on making the woman happy. Drawing on various texts including the Kamasutra, the author makes compelling arguments about carnal hedonism of the time and pleasurable companionship. “[It’s] a great pity that the mythic glories of ancient India so fancifully touted by right-wing Hindus now fail to include the golden age of sexual enjoyment,” she says. The author also discusses the renunciation of sex by Buddhist monks. Sample this:

“It’s a great pity that the mythic glories of ancient India so fancifully touted by Right-wing Hindus now fail to include the golden age of sexual enjoyment,” says Nayanjot Lahiri

Meanwhile, Lahiri admits the hazards of studying deep history, which, she explains, is history that one can only understand properly in the long term. “You cannot isolate events (or individuals) in that deep past like that of the history of Akbar or that of Gandhi.” It is a period too far back in time for details of individuals to be obtained.

In another chapter, titled ‘Laughter’, Lahiri takes us through the solemn faces of Christians of the ancient world who always seem to be on their guard or too pensive to laugh or treat laughter without scorn and fear, and then turns to what laughter meant in ancient India. ‘The propensity to laugh at kings and gods is, however, seldom the sign of moral badness in ancient India,’ she writes.

Lahiri also writes about identity, death and the afterlife in ancient India in comparison with the rest of the world around the same time; she comes up with interesting information on the importance given back then to animals after they died.

She takes us on a guided tour in this book through Mehrgarh in Balochistan, Pakistan; Girnar in Gujarat; and various parts of south India.

Lahiri also explores, with the finesse of a field archaeologist, the metamorphosis that ancient historical characters undergo over the centuries. She puts the spotlight on how Ashoka came to be looked upon over two millennia, from India to Thailand. Another example is that of Alexander of Macedonia who conquered Persia. ‘So, through a series of stories, he began to be described in medieval Persia as the forgotten son of Darius of Persia.’ The story of how Darius ended up siring Alexander and how the latter got that name makes for a hilarious read. Antiquity, in the author’s view, therefore, is never dead. It continues to inspire new stories.

Ashoka remains the author’s favourite in this book and she argues why he deserves respect: because he apologised and reformed himself. Lahiri, who is an ardent admirer of writer Haruki Murakami, says it is a quality hard to come by even in the modern age. “Which member of the Gandhi family has done that? Did Modi do that?” she asks, referring to communal riots in 1984 and 2002, “You are where the administration stopped. It is your duty to apologise for that.”

This work, lucid and entertaining, is a departure of sorts for Lahiri, a scholar’s scholar who is grounded and self-effacing. Her eclectic intellectual obsessions reveal themselves in these pages. Each page exudes the scent of an authoritative historian of ancient India. And therefore, it is as important a book for any student of ancient history as her previous ones that earned her widespread recognition.