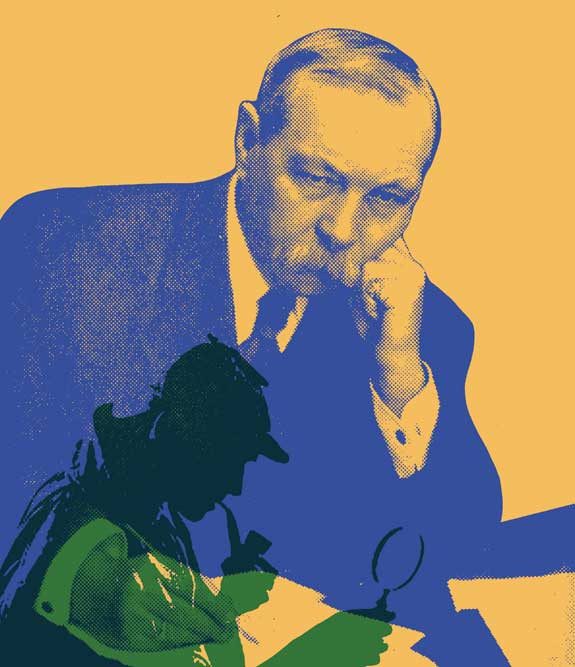 THOSE OF US who are fans of Sherlock Holmes often wonder how Arthur Conan Doyle dreamt up this nonpareil among detectives. To grasp a writer’s act of creation, we have to traverse the emotional and intellectual paths tread by that writer in a particular era. Sherlock was the fruit of a rather long and arduous struggle by Arthur, a child of an alcoholic father who was in and out of sanatoriums from the time Arthur turned ten, and a mother who was the mainstay of their home. Sherlock was also the product of Arthur’s experiences as a medical student under a brilliant and eccentric surgeon, Dr Joseph Bell, who provided the contours of the character’s mental makeup. In Arthur and Sherlock, Michael Sims gives us a layered and satisfying account of the different elements of Arthur’s life that conspired to create the great detective.

Part I is about Arthur’s early life and ends with his marriage. Part II is about the influences on Arthur’s writing life and part III speculates about the reasons for the choices made by Arthur in the creation of Mr Holmes and Dr Watson. In each chapter, Sims introduces us to the building blocks of Sherlock’s character created by Arthur’s real-life experiences. Each chapter is elegantly written and speaks to the subject of the book. An early chapter traces artistry in Arthur’s own lineage: his father was a painter and illustrator, his uncle was the creator of Punch’s famous logo of Punch and Judy, and his grandfather was a famous caricaturist.

When an author chooses a particular genre, and in this case, detective mysteries, the motto he or she is following is ‘write what you like to read.’ Sims takes us through Arthur’s readerly journey. We learn about Arthur’s love of literature and for swashbuckling action and heroism in Ivanhoe, martial poetry, and tales of adventure. Thackeray, Emile Gaberiau’s eagle-eyed police detective Monsieur Lecoq, Edgar Allen Poe’s logical C Auguste Dupin, and Wilkie Collins’s Sergeant Cuff from The Moonstone (often called the first modern detective novel in English) and Dumas’ musketeer D’Artagnan were among Arthur’s favourites. He was also influenced by Francis Bacon’s emphasis on rational enquiry. These authors hewed to the passions of the age in which they wrote. We learn about the era and its preoccupations— a scientific, rational and logical mind was all the rage in late Victoriana, and this was beginning to manifest itself in the new medical man embodied by Dr Joseph Bell. Bell and others made many a diagnosis through the careful observation of the patient’s bodily features such as the gait, the scars, the position of deep marks on the fingers and so on.

Since Arthur used and amplified Dr Joseph Bell’s methods when he built Sherlock, Sims takes us on a stroll through Bell’s biographical details. We learn that Joseph Bell came from a long line of Edinburgh physicians including his grandfather Charles Bell who described what came to be known as Bell’s palsy. Bell was a passionate naturalist, a hunter and a gardener who felt that commitment to his fellow human beings was a religious duty.

‘How to write’ books often tell us ‘write about what you know.’ What did Arthur know when he began conceptualising Sherlock Holmes? He had been Bell’s student and had taken notes on the method followed by Bell in formulating a (usually correct) conclusion. He was a certified doctor who had opened his practice in Portsmouth and was married to the petite and soft spoken Louise Hawkins, nicknamed ‘Touie’. He had experienced poverty, and, having set up his practice, had spent hours anxiously watching passersby through the wooden blinds from the first-floor window of his office, hoping that they would read his brass nameplate and enter. He had been to the Arctic as a ship doctor, and had swum in shark-infested waters, had actively fought with death by experimenting on himself by consuming dangerously high dosages of a drug in order to write a paper about it. He had written several short stories—tales of adventure and even a novel (lost in the mail) about a fiction writer —and had faced countless rejections in his initial forays. Only after Arthur harvested his memories of the Arctic to write a ghost story, The Captain of the Pole Star, a magazine bought it for a satisfying ten guineas.

Part II of the book is by far the most satisfying and thought-provoking segment. In chapter 14, entitled the ‘Method of Zadig’, Sims illuminates the ancient lineage of a scientific detective. ‘Now and then, across the millennia, amid the chaos and unfairness of society, a writer had imagined a just, rational hero whose eagle eye and respect for evidence enabled him to stride boldly free of bias and preconception.’ Sims points out that Poe had consciously sent his detective, Dupin, following in the footsteps of distinguished predecessors, particularly a biblical prophet (Daniel) and a supercilious philosopher (Voltaire). Daniel, a noble Hebrew exiled in Babylon, investigates a crime, a locked room mystery, which is described in the Book of Daniel. Arthur points out that the secret of the thinness and the intensity of the detective story is that the writer is left with only one quality, that of intellectual acuteness, with which to endow his hero. ‘On this narrow path the writer must walk and he sees the footmark of Poe always in front of him.’

To be able to create a scientific detective ‘who solved cases on his own merits, and not through the folly of the criminal’, one has to understand what was revered as a scientific method of Arthur’s period

Is this true of detective fiction today too? I would say that it is more true today perhaps than ever before. This love for puzzles and the delight in deciphering solutions through analysis remains with us ever more so in an age of technological and scientific discoveries.

To be able to create a scientific detective ‘who solved cases on his own merits, and not through the folly of the criminal’, one has to understand science, and what was revered as a scientific method in Arthur’s period. As Joseph Hoffman in Philosophies of Crime Fiction points out, the age of science and technology began in the late 19th century, and with that the expectation that there would be greater social and humanitarian progress. The world expected greater insight and more justice from its scientists. Sims allows us to glimpse the spirit of those times through the experience of a particular person, Arthur. We learn that the University of Edinburgh’s medical department, where Arthur enrolled in 1876, brimmed with eccentric and brilliant professors who excelled in induction—reasoning from the particular to the general (example: these footprints are very far apart, only tall persons can manage such a stride; ergo, this person is tall).

Arthur took this evidence-based approach into the world of the crime scene. That’s why Watson allowed Holmes to hold forth and explain how he interpreted the evidence. However, Holmes calls it deduction (which is in fact reasoning from the general to the particular). We learn that deduction was Joseph Bell’s favourite word, so Arthur used that phrase instead of induction, speculates Sims.

In Part III, Sims analyses the choices Arthur made in writing the detective story. Imitation is the best form of flattery, and Arthur certainly flattered Robert Louis Stevenson who had published a sequel to the New Arabian Nights entitled The Dynamiters. The first story was set in Utah among the Mormons. ‘Seldom hesitating to borrow from other writers, Arthur incorporated generous helpings of The Dynamiter into A Study in Scarlet,’ says Sim. The more interesting bits come when Sims speculates on how Sheringford Holmes became Sherlock Holmes, and Ormond Sacker became John Watson. Sims thinks that Ormond came from Great Ormond Street hospital in Bloomsbury. In his journal Arthur wrote that he did not want a Dickensonian kind of moniker that implied character—Mr Sharpe or Mr Ferrets. Like all writers, he wanted an unusual name for his protagonist who was going to be a reserved young man, a philosopher, a collector of rare violins, with sharp piercing grey eyes, a thin nose that lent his face an aquiline vigilance (drawn from Dr Bell’s visage). Physically though, the character would be more impressive than Dr Bell. Square jawed, dark browed man over six feet tall, and lean as a whippet, radiating confidence and vigour. Both the characters would be 27, the same age as Arthur.

After noting that Arthur knew of the exploits of one Chief Inspector William Sherlock, Sims says, ‘for reasons that can never be known for certain, the name Sherlock occurred to Arthur.’ A bit of a let down. Same with Watson. Arthur wanted an English-sounding and ordinary name, but we don’t know how he picked it. Why Baker Street? Same answer—not sure. For a book that focuses on the creation of such an iconic character, readers are left in the ‘perhaps’ zone in relation to some key questions.

While Part III sometimes repeats what we have already learnt, it also illuminates the travails of a young author in the publishing world. For instance, Arthur was paid £25 to relinquish his rights to A Study in Scarlet to the publisher, and never received a single penny for it thereafter. “Inspector Ghote, c’est moi,” said HRF Keating when asked about how he came up with the character. Well, some parts of Holmes were akin to Arthur’s own nature, says Sims. A casual bravery, resistance to conventionality, burgeoning passion for justice and a merging of a romantic vision of science with the myth of the heroic adventurer.

But while focusing on the domination of reason over emotion for Sherlock, Sims does not take it to its logical conclusion—that such a detective becomes a god-like creature. Had he done so, we would understand better Sherlock’s problematic relationship with legality and why Holmes often oversteps the law. In the mid-1920s, a German sociologist, Siegfried Kracauer wrote an essay entitled ‘The Detective Novel’. Kracauer pointed out that detectives like Sherlock, as representatives of higher reasoning, a reasoning that need not explain itself, produces in such persons an ironic relationship with the legal authority of the police.

The divergence between Sherlock and Watson in their approach to justice is also less emphasised by Sims. As Joseph Hoffman says, while Watson underlines the benefit of Holmes’ work to justice and society (The Final Problem), Holmes himself is less concerned with justice, and more interested in the true artist’s perfection (The Dying Detective).

What Sims does well, and in an easy conversational style, is evoke the zeitgeist of the late 19th century, the concerns, the anxiety, the man, the febrile imagination, the character and the stories in a very well put-together book. Yes, the book could have ended earlier, and yes, there is repetition, and yes, some of the implications of Arthur’s choices on Sherlock could have been teased out further. But at the end, the reader walks away in a reflective mood, feeling that he or she has learnt something about why Arthur created Sherlock.