Mohammed Hanif: ‘There is nothing left to satirise’

Mohammed Hanif’s new novel takes flight when a plane crashes. The author tells Nandini Nair why death is the only lover who does not betray her promise 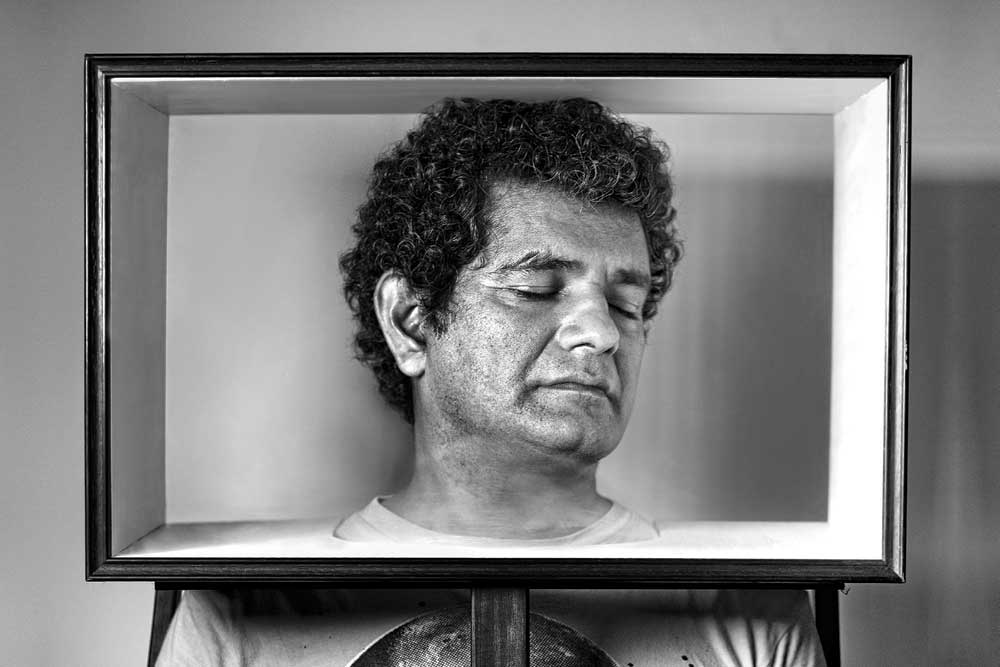 MOHAMMED Hanif’s novels elicit a nervous laughter. It is not the chuckle of merriment and release; rather, it is the titter of discomfort born from recognition. As a journalist reporting from Pakistan, political and social realities inform his fiction, but as a novelist he takes those truths and stretches them to limits that are unreal, but familiar.

His first novel A Case of Exploding Mangoes, longlisted for the 2008 Man Booker Prize, was based on the mysterious crash of a plane that killed Pakistan’s dictator General Zia-ul-Haq, several army generals and the US ambassador to Pakistan. His second novel Our Lady of Alice Bhatti (2011) was the story of boy trying to impress girl, girl playing hard to get, boy trying harder, girl succumbing, marriage, happiness, sadness. But the novel’s heart wasn’t romance as much as injustice.

A profile in The New Yorker titled ‘Dangerous Fictions’ (2016), details Hanif’s childhood. ‘He grew up in a village in Punjab province… His father was a farmer, like nearly everyone else there, and neither of his parents could read or write; the only book in the house was a copy of the Koran.’ Hanif graduated from Pakistan Air Force Academy but quit early to start a career in journalism. He worked in the UK for more than 10 years as a reporter before moving back to Karachi in 2008. A vocal and prolific commentator on Pakistani matters, he now has a monthly column in The New York Times, where he writes about everything from roti -making to Pakistan elections to patriarchy.

Hanif the journalist compared to Hanif the novelist is like Diet Coke to the real Coke. Both are similar but one seems like a flatter version of the other, even if a few fans’d disagree. In his fiction and in his interviews he exudes a certain what-the-fuckness. The world boggles him, and all he can do is stare agape and wonder how things got this messed up. He often sounds sad. He sounds like his ‘true’ self. His opinion pieces share a similar sense of disbelief at what is transpiring, and it is conveyed with the same wryness, but less resignation. Here is an example from an article he wrote titled Pakistan, Let’s Talk Sex: ‘Talking about population control might require talking about sex, and you can’t really talk about sex on prime time TV or the radio, in Parliament or at village gatherings… As if just saying it was the same as doing it. We don’t even talk about sex with the person we’re doing it with.’

Hanif is one of the most interesting authors in South Asia today because of the originality and authenticity of his novels, which have an anarchic tone but are also essentially humane. His most recent novel Red Birds (Bloomsbury; 304 pages; Rs 565) is told in different voices and is based around Ellie, an American pilot who crashes his plane into a desert, and finds refuge in the camp he was meant to bomb. At the camp he meets young Momo, his Mother Dear, Father Dear and their dog Mutt. The family is trying to find Bro Ali who left one day for the hangar and never returned home. Ellie emerges as the blundering foreign pilot who reaches into his arsenal of lessons from the Cultural Sensitivity Course to survive in an alien land. Ellie tells the family in the desert, ‘I myself prefer halal. Halal is healthier.’ And then adds to himself, ‘I am glad I took my ‘Eat and Drink With the Enemy’ module of my Cultural Sensitivity Course seriously.’

But Red Birds is not Hanif at his peak. His two previous novels held a reader in their talons because of how flesh and blood the characters were. Here there is satire and insight, but too little soul. It is to the credit of Hanif that the most compelling voice in the novel is that of the dog with a fractured leg, fried brains and a broken heart. The voice of Mutt allows readers to see the other characters and events through his all- knowing eyes. He has not only the best lines but also the most compassionate heart in the novel, which tells us more about humankind than the animal world. Mutt broods, ‘I am Mutt and I can excrete gold and spout Rumi but I will remain Mutt.’

In an email interview, Hanif speaks about the inspiration behind Mutt, a political opera he is working on, and who he would cast to play the role of Imran Khan in a Bollywood movie.

Tell me about your pet dogs at home. Who are they? What are their stories?

We have only one right now and his name is Paco. He comes from Karachi’s Empress Market. He was a puppy when he was rescued from a butcher’s shack where he had been viciously attacked by a gang of fat cats. He still harbours that grudge. I have tried to give him sensitivity courses but he is a bit stubborn. He also has slight contempt for pedigreed dogs. He doesn’t like fireworks and sometimes thinks that he is a footballer. We go out every day into the so called most dangerous city in the world and we both protect each other. So far we are winning.

What were the challenges of getting the voice of Mutt right?

Always thinking, ‘What will Paco think?’

What is your most vivid memory of being a fighter pilot?

I was in training. There is this manoeuvre called ‘Spin’ where you are headed into the ground, revolving on all three axes. The first thing you have to do to recover from Spin is to cut the fuel and press the right rudder. We were practising Spin, heading into the ground I pressed the fuel to the full and pressed hard on left, the exact opposite of what I was supposed to do. My instructor took the controls from me and saved my life, his own life and I think the world at large from a very bad pilot.

What we call dark humour is our creative impotence to embarrass the powerful in any meaningful way, to say anything that will change anything

While writing Ellie’s character, were you ever wistful about your pilot days?

Why does Mother Dear get her own chapter so late in the book? (Asking because Alice Bhatti was just so good.)

Thanks, but Alice Bhatti despite being good didn’t come to a very good end. I wanted to avoid that. Or maybe like most men I thought I can just tell an entire story without giving any women a voice. Or maybe I wanted to let her have the last word. She is there right from the beginning, and I think we can see her mounting frustration till she decides enough is enough.

We don’t know much about the country where the action takes place. We know it ‘reeks of neglect’ and that it is an ‘outpost of war that war itself is not interested in’. What was the reason for leaving it unnamed, unidentified?

A novel doesn’t necessarily come out of reasons. Reasons are imposed afterwards. Maybe, I had no appetite left for local colour. Maybe, the real country called Pakistan had too many graves of people close to me, and maybe, I was trying to blank out that horrendous familiarity.

What is the role of mothers in conflict?

To try and ensure that her children don’t get killed or don’t go out to play and then disappear for years. She sometimes has to sacrifice other people’s children to save her own. Sometimes she is asked to choose between her own children. And God forbid if something happens to one of your children, then you have to go to all these protests and become a national icon of courage and resilience when all you want is to live your own life.

How do you see the world? In your books, it often seems as if death and dark are the fabric of life itself.

I don’t know about dark, that comes and goes, but death is the only lover who never betrays her promise. There was an old Indian song which had the words, ‘Maut mehbooba hai (Death is a lover)’…

As a journalist, what does fiction mean to you?

I always wanted to write novels but didn’t know how to, so I just started randomly and before I knew it, I had become a journalist.

In a post-truth age, what can satire achieve?

Nothing. There is nothing left to satirise. What we call satire these days is actually our banal reality. What we call dark humour is our creative impotence to embarrass the powerful in any meaningful way, to say anything that will change anything.

As the media and state find themselves increasingly pitted against each other (whether it is in India or the US or Pakistan), what do you think is the role of the journalist?

Tell us about the opera Bhutto. What are the challenges of translating history and biography for the stage?

Opera is all about music and you have to learn to write less and let the music tell the story. I struggled with it in the beginning but my composer Mohammed Fairouz is very good at convincing you that fewer words and more music make the world a better place. Final rehearsals are happening this November and I can’t wait to hear the music.

Do you think the story of Imran Khan could be an opera? What do you think it could be? A Bollywood movie? Who would you cast?

I hope it’s not an opera. In my little experience, you have to kill a lot of people for an opera to work. We have had too much opera in Pakistan, Bollywood rom-com definitely. Once a producer told me that when someone brings him a movie script, he asks them is Akshay Kumar in it, and if he is, he greenlights the movie. So Akshay Kumar, I guess. I would prefer Emraan Hashmi but I don’t think they ever listen to writers when casting.

We were promised Medina, which I hear was a good place but for the moment we are stuck in old Pakistan. Why should I worry about the Subcontinent? We have mass murdered each other before; we are always raring to have another go.

What are your earliest memories of reading?

The Quran. Colonel Mohammed Khan’s books. Scraps of newspapers and magazines that pakoras and jalebis came in.