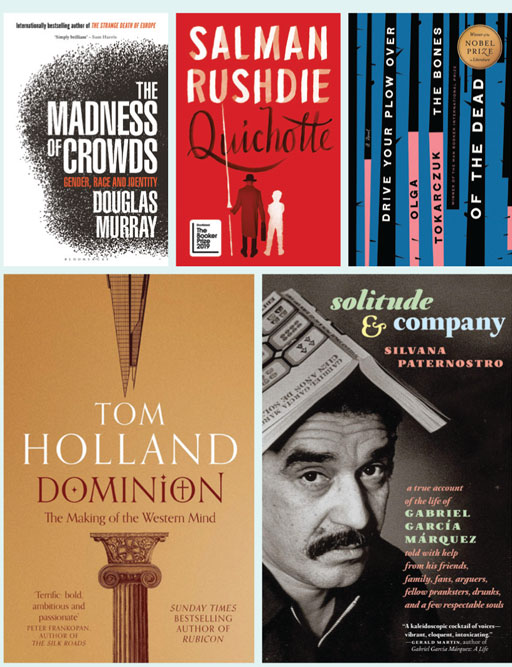 I ENDED UP READING MORE NON-FICTION than fiction, even though there is nothing more rewarding than a story that is, to quote Kafka, ‘an ice that breaks the seas frozen inside our souls.’ There was indeed Michel Houellebecq, the most widely read French novelist—and a professional provocateur—at work today. After the irreverent, Gauloises-fuelled decades of the existentialists, the lull in French literature seemed never-ending. Then came along Houellebecq. Serotonin (William Heinemann) is Houellebecq’s new novel after the massively misread Submission, in which he imagined a Muslim president for the Fifth Republic. Here too, the political got him the headlines. The yellow vests movement that rocked the Macron regime had its prototype in Serotonin, in which French farmers stage a blockade—a superbly choreographed set piece in the novel—as a protest against EU regulations on milk. As the title, inspired by an antidepressant, suggests, Serotonin is bigger than the novelist’s acquired prophetic aura. It’s about a lone man suffering from sadness. His journey is one of fiction’s rare moments of retreat without redemption. Talking of journeys, Salman Rushdie semaphored the most adventurous of them all. Quichotte (Hamish Hamilton) is Don Quixote played out in today’s America, featuring a knight with an Indian ancestry and a Sancho who is literally a poignant figment of imagination. Rushdie is not only playing Cervantes for us; Quichotte is a meta-picaresque. It’s the thrill—and tragedy—of being trapped in multiple imaginations. Of journeys, the one taken by the Polish novelist Olga Tokarczuk in Flights (2018) was truly experimental. I chanced upon Flights while browsing through in Daunt Books on Marylebone High Street, London, last year. The multiple travels of the novel, defying genres and inventing suitable narrative devices, gave the world a brand new East European voice after Kafka, Kundera and Klíma. Drive Your Plow Over the Bones of the Dead (Riverhead Books) is a smaller book, but darker and brooding, set in the remoteness where even insects will be given an opportunity to reclaim their dignity, courtesy the unlikeliest of serial killers in fiction. And I want to end my fiction choice with another traveller, Jack Reacher, still the wandering vigilante, still with the only baggage of a toothbrush, but, I wondered, whether he had mellowed down a bit lately. The balletic physical action is less now; no more a Persuader (my favourite.) In Blue Moon (Bantam) by Lee Child, Reacher, the longest-living action hero in popular fiction, plays out his justice script in a nameless American city that hides a Russian cyber secret. 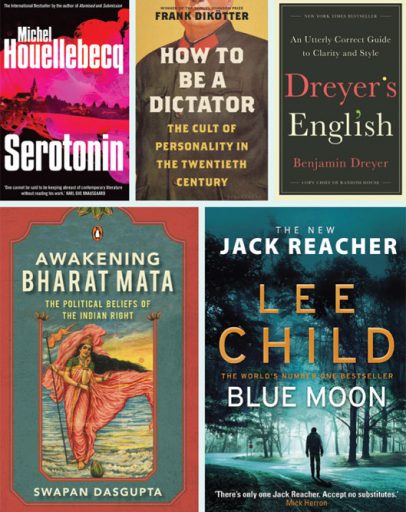 In non-fiction, I will begin with Tom Holland’s Dominion: The Making of the Western Mind (Little, Brown). The book that first drew me to Holland was In the Shadow of the Sword, an epic history of Islam and jihad, written with polemical flair. The same stylistic flamboyance is there in Dominion too. The Western mind, he argues, is defined and designed by Christianity. In the beginning was the Book. The Book of man, though, created revolutions—and dictatorships. In How to be a Dictator: The Cult of Personality in the Twentieth Century (Bloomsbury), Frank Dikotter gives brilliant portraits of men—yes, all men!—who built and preserved republics of fear. Starring in this world of simulated popularity and copyrighted conscience are eight veterans of evil: Mussolini, Hitler, Stalin, Mao, Kim Il-sung, Duvalier, Ceausescu and Mengistu. Fortunately, dictatorship is on the decline, and that is because: ‘As hubris and paranoia take over, they seek more power to protect the power they already have. But since so much hinges on the judgements they make, even a minor miscalculation can cause the regime to falter, with devastating consequences. In the end, the biggest threat to dictators comes not from the people, but from themselves.’ Some dictators look larger—or smaller—than their historical size in Latin American fiction. Just think of Llosa’s The Feast of the Goat and Márquez’s The Autumn of the Patriarch. Solitude & Company (Seven Stories Press) by Silvana Paternostro is, as the subtitle says, ‘the life of Gabriel García Márquez told with help from his friends, family, fans, arguers, fellow pranksters, drunks, and a few respectable souls.’ This book is pure joy, and here you read what lies beyond the realm of majestic biographies and memoirs.

This is the oral biography of a storyteller whose stories still remain unsurpassed in their style and soul. The story of our times is mostly told by non-fiction writers with the skills of a novelist. Douglas Murray, a British journalist and author, is not a storyteller. He is a compelling arguer from the right. In The Madness of Crowds: Gender, Race and Identity (Bloomsbury), he explains the cultural disruptions of the post-ideology world. The moral certitudes of the new century have made this world a battleground of grievances. The big idea is dead. We are busy defining each other, and indexing ourselves with identity tags. India, too, is a site of great cultural disruption. Awakening Bharat Mata: The Political Beliefs of the Indian Right (Viking) by Swapan Dasgupta puts this disruption in a historical as well as civilisational context. This is an anthology of writings that bring out the idea of nationhood and nation-building, supported by elegant introductory essays by Dasgupta, a refined voice from the Indian Right. This book redeems ‘Hindu’, as an idea and an adjective, from the shrillness of the base. And let me end with a book that is a copy editor’s guide to wayward writers: Dreyer’s English: An Utterly Correct Guide to Clarity and Style by Benjamin Dreyer (Century). Dreyer is, among other fancy designations, the copy chief at Random House US. His book is not a dull guide. It’s fun. Here’s his first challenge to his reader: Go a week without writing very, rather, really, quite, in fact…