Inconsistent but illuminating essays on an India shifting right 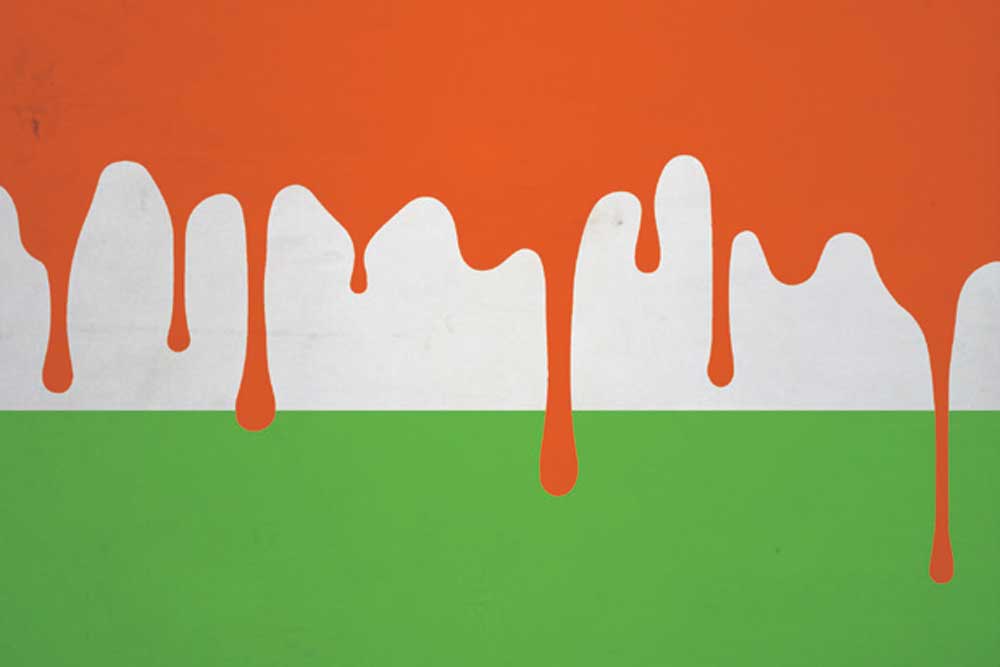 THE BACKDROP TO this collection of essays, put crudely, is the rise of the Right and decline of the Left and centre. In her Introduction, editor Nidhi Razdan, a TV anchor with NDTV 24×7, speed-maps today’s terrain by name-checking the landmark controversies of the past year or two, from surgical strikes to the ABVP. As a girl, Razdan regularly visited Kashmir, where she saw as much of Hazratbal as she did of Kheer Bhawani. The element of 1980s nostalgia and ‘Kashmiriyat’ survives the expulsion of her Pandit relatives in 1990. Hence the faith with which she returns to Rabindranath Tagore: ‘To worship my country as a god is to bring a curse upon it.’

In ‘The Coma of Civilization’, journalist Rahul Pandita speaks of betrayal. He is a Kashmiri Pandit and in this complex essay, he shows how the loss of place and pride are a reminder of ‘how much we had suffered for our gods and for nurturing the idea of a civilization’, that is, the promise that India did not fulfill. There is a hard nostalgia here, as he maps the ‘equilibrium of dharma’ within which he grew up as a boy in Srinagar—an equilibrium the restoration of which, he says, lay behind many votes in 2014. Shah Faesal writes a fine-grained essay, ‘On the Wrong Side of History’. This young Kashmiri achieved stardom/ notoriety as an IAS exam topper. He is now a civil servant with access to ‘the leak in the sky from where miseries of common people, [especially the] fence- sitters, came trickling down’. Context: in Faesal’s village most families benefited from links with either state forces or militants. His father stayed aloof, and still paid with his life.

Another keyword that leaps from this collection is ‘inequality’. In ‘An Indian Feminist at Seventy’, Aruna Roy, rights and RTI campaigner, looks at the questions raised by two women, rural and urban, about inequality and how it shapes their lives. Naurti the Dalit sarpanch stands out, and her experiences show how steps towards equality are met by insidious reassertions of patriarchy.

In ‘The (In)Dignity of Our Sexualities’, academic Gautam Bhan writes of the rollercoaster ride of queer rights, from the reading down of Section 377 in 2009 to its reinstatement in 2013, and how ‘it is high time that the fight for social equality… found its place alongside, if not ahead of, political equality’. Not to miss: the failed promise of Indian cities in the search for equality. Environmentalist Sunita Narain’s ‘In Our Idea of Utopia’ asks us to look at ecology and the economy as questions of justice and equity. For instance, in planning urban infrastructure. The essays that most directly approach the question ‘What is India?’ are those by the former NDA Finance Minister Yashwant Sinha and the historian Mukul Kesavan. Sinha looks at the rise and fall of ‘ideals’ as the moving factor behind politics since the freedom movement, identifying India’s corrupt election system as the central weakness of our republic. The key to a revival of ideals, he suggests, is decentralisation. Kesavan’s essay on ‘The Anti-colonial Origins of the Idea of India’ is a revisionist treat. He connects a few pre- Independence Congress moderates—a chiefly Parsi ‘Bombay Gharana’—with the construction of the idea of India as a plural and diverse nation, to counter extremists and their Hindu India.

More sentimental takes on this inclusive India are to be found in the essays of Congress MP Shashi Tharoor and, in the shape of a family history of Partition, Trinamool Congress MP Derek O’Brien. Actor-politician Shabana Azmi extols the ‘Ganga-Jamuni tehzeeb’. Political philosopher Pratap Bhanu Mehta’s ‘India: From Identity to Freedom’ appears to grow from Kesavan’s tale but is analytical and prescriptive. In India, he says, the ‘valorisation of diversity’ and our brand of secularism have built a ‘federation of communities’ rather than a ‘zone of individual freedom’. Identity is a trap that curtails freedom. This idea of India, he says, needs to be upended, or there is no escape from majoritarianism.

Speaking of which, ‘Rise of the Indian Right to a Hegemonic Role’, by editor- politician Chandan Mitra of the BJP, is a disappointment. He sees an economic Right and a cultural Right and hops from one to the other through a tale that stretches a century into the past, somehow managing to avoid any turning point that involved violence or relations with the Raj.

Inconsistent and various—clearly, Razdan has been no stern editor—this book does have its consolations.