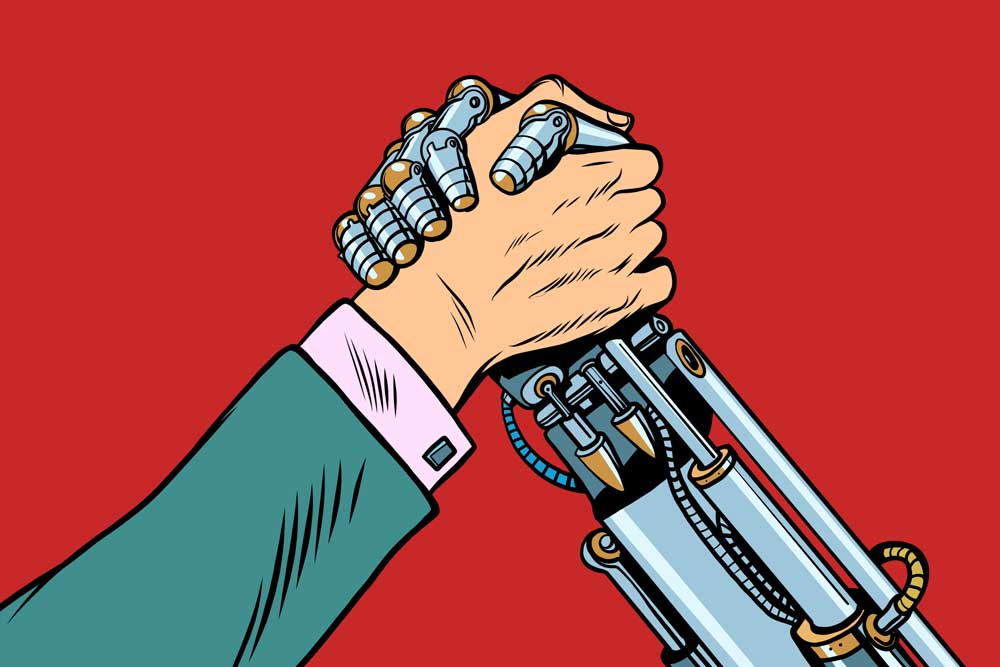 INNOVATION HAS ALWAYS been the backbone of human evolution. It brings with it development, progress and ease of work, but it also often bears potential for harm. For example, the controlled use of fire, or a wheel. Both were transformative discoveries or innovations for humankind. While the wheel has made commuting and travel easier, it is also responsible for traffic congestion and carbon emissions. Yet, there is a sizeable population that has no access to vehicles for transportation at all. Technology, too, faces the same issues. The boons of technology don’t come without the banes. And access to technology is divided between haves and have-nots.

This and more is what Jamie Barlett talks about in The People vs Technology that sets the stage for a possible tech- nology-driven apocalypse to come.

The book starts with a warning: ‘Any grand struggle between two incompatible systems can result in only one winner. Either tech will destroy democracy and the social order as we know it, or politics will stamp its control over the digital revolution.’

As an ardent user and promoter of technology, I see the internet as not just a medium or tool for communication, but also as a message, language and script. It connects one person to another to another, one machine to another, one piece of information to another. The internet is supposed to be a liberating technology. However, there have been ample incidents where it has been used for the domination of people. By almost entirely ignoring the negatives, consumers often hail the positives of technology to such an extent that they embrace it without exercising much caution, readily giving up their personal information to a few strangers sitting in Silicon Valley.

Barlett is director of the Centre for the Analysis of Social Media, a leading UK think-tank, and has previously written a book called The Dark Net (2014) to throw light on legal and illegal subcultures on the internet. Having worked on projects related to crypto-currencies, surveillance, counter-surveillance and the Islamic State’s use of social media for propaganda, he is also known as a popular technology journalist.

In this book, the author holds technology responsible for threatening democracy, which is analogue rather than digital and on the edge of redundancy in its fight with technology in modern times where lives are just data in a globally connected network (this is interesting, though half the world is yet to get online). This threat is inevitable, he says, as the internet technology and its various tools lead to panopticon, a system of control designed by philosopher and social theorist Jeremy Bentham in the 18th century. Under this system, a watchman observes occupants without their knowing whether or not they are being watched. In simpler terms, it’s a system of surveillance. With increasing penetration of information available online and the usage of platforms like Facebook by individuals, social media applications—and/or governments in cahoots with these—serve as the watchmen in this analysis for the control of people, their decisions and democracy. All algorithms and tools of artificial intelligence deployed by such platforms help these ‘watchmen’ collect information, create scenarios and predict reactions—even monitor the so-called ‘felicific calculus’ (formulated by Bentham again), an algorithm that calculates the degree of pleasure that a specific action is likely to cause.

Algorithms, automation and artificial intelligence will eliminate the premise of democracy and go on to take over humanity

Barlett offers the example of the recent US election to elaborate on this, underlining how Project Alamo (a database of voter information) and Cambridge Analytica helped Donald Trump win the presidency through one of the most effective digital campaigns in political history. Together, strategists collected behavioural data and influenced people to vote for Trump in a country that is hailed for its ‘democratic’ values. The fact that the Trump campaign spent $70 million on Facebook advertisements alone says a lot.

The author goes on to discuss the ‘Global Village’, a term coined by Marshall McLuhan who predicted that the coming age of electronic communications would lead to a breakdown of established structures. In this Global Village, everything one does—from updating social media feeds at a location to operating Internet of Things—is recorded and collected as data to be utilised as and when required. Smartphones have already begun to disengage citizens from their civic roles.

It is only a matter of time before algorithms, automation and artificial intelligence will eliminate the premise of democracy and go on to take over humanity and the human workforce almost entirely, unless we open our eyes and upload the six pillars of democracy: active citizenship, shared culture, free elections, stakeholder equality, a competitive economy and civic freedom, and trust in authority.

By the end of this book, you’re left with so much to process and analyse. And you can’t help but realise that all the technology-driven comforts of life have only made you more vulnerable. While sounding an alarm for a technology- driven apocalypse, The People vs Tech leaves a lot to think about—both for the sake of individualism and institutionalism— when it comes to the blind consumption of technology and our growing dependence on it. While putting readers in panic mode, it forces you to think whether you want to be an alert citizen or an addictive user. And so Barlett leaves you with ‘20 ideas to save democracy’. He advises you to own your opinion and not always rely on technology; fight distraction and the addiction that makes you hit ‘refresh’ on your apps; smash your echo chamber by engaging in dialogues with diverse opinions and adopting the ‘principle of charity’; and strengthen your privacy settings to break the ad model of tech giants.

He encourages tech firms to follow a set of new digital ethics that would replace the economy of attention with an economy of human values; asks schools to teach critical thinking to help children navigate the internet (and the information it has to offer) with due scepticism; suggests that law makers police algorithms and force big data to be accountable; wants the authorities to update election campaign laws to ensure transparency in the use of social media and ad spending; and demands that polling day always be a public holiday (or Celebration Day).

He proposes a ‘bot-watch’ that lets social media platforms share information with independent groups to identify manipulation techniques; a vigilant middle-class that shares wealth and publicly-owned infrastructure and resources; a tax on robots that replace human workers; new safety nets in the form of new-age skills and trainings; and toughened workers’ rights that would strengthen gig economies. Barlett also wants ‘fair trade browsing’ that would highlight the largely invisible costs of ‘free’ services. Lastly, he offers the hope that future governments will institute a bold programme of reforms designed to protect democracy from turning redundant and thus rise in ‘defence of politics over technology’.

If you care about saving democracy, it might be a good idea to pick up this easy-to-read book and think twice before you believe whatever you read online, this review included.