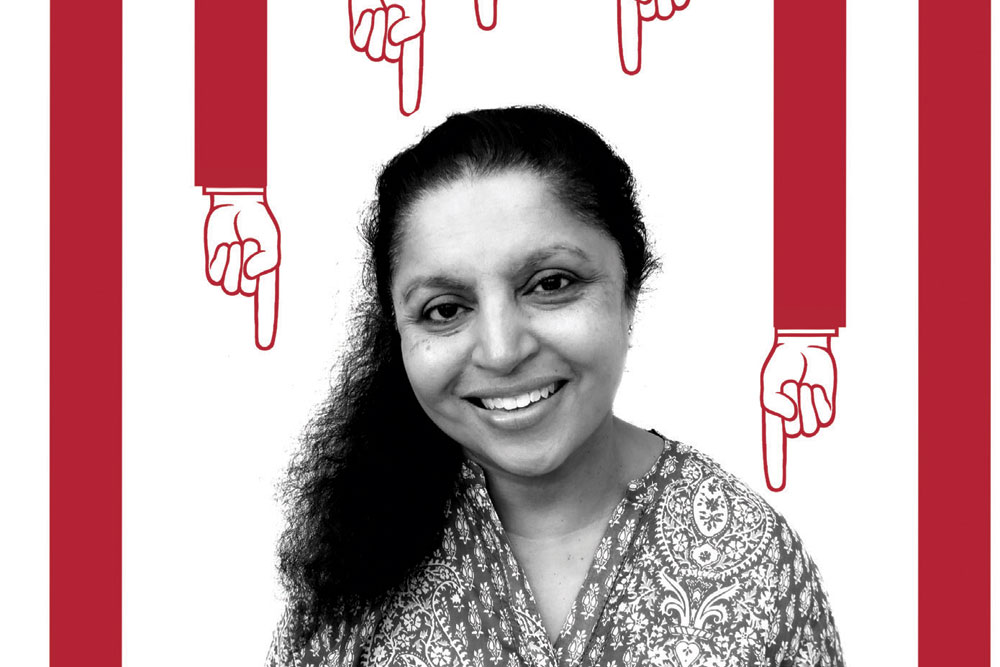 IN 2010, DEVI S Laskar’s home in Atlanta, Georgia was raided at gunpoint. Among other things the police confiscated her computer, and with it the beginnings of her first novel. That novel, which eventually became The Atlas of Reds and Blues (Hachette; Rs550; 253 pages) which released earlier this year, opens with the very incident that left her bereft of the manuscript: a raid.

‘Four years later I was able to sit down and rewrite (and rethink) the book, and I thought to include the raid as the contextual glue for the story of this family and narrator who had been through so much,’ she says, via email.

Built on a combination of flashbacks, flashforwards, snippets of conversation and historical nuggets, her debut navigates the recognisable terrain of the present-day US with its police brutality, racial tension and immigrant angst.

The central character and narrator, a mother of three girls and a second-generation migrant in the US, is either referred to as ‘The Real Thing’ or simply ‘Mother’. She moves through the novel, and her life, almost unseen; her colleagues don’t seem to register her presence, her husband is oblivious to her travails, her teachers are sceptical of her Americanness. Leaving her protagonist unnamed was a deliberate move to re-inforce the immigrant experience where ‘this family and this narrator are invisible in society and unacknowledged as Americans,’ says Laskar. ‘There was no point in givingthem names, no one in their world would bother to learn it or remember it,’ she adds. ‘Second, I come from a Bengali family and as I was growing up, no one called each other by their given names. Instead everyone had a title, and so I wanted to pay homage to that custom.’

Laskar began work on the novel in 2004, set it aside in 2009, lost it in 2010 (her belongings were never returned) then resumed writing it between 2014 and 2016. But it isn’t just an ‘immigrant story’ as novels by diaspora writers often get labelled, she says. ‘It is a contemporary life story, and it is a modern American story. It is a story that holds up a mirror about present-day society,’ says Laskar, who is now based in San Francisco.

Mother faces racism as a child, a generation later, her daughter faces the same. There are the questions on origins and belonging. The abrasiveness of cops. The condescension of shop staff. American racism is as quintessential as apple pie. But Mother is adept at holding back, at holding it all in, and keeping these things from her clueless White American husband, simply referred to as ‘Hero’.

“I don’t think the Atlas of Reds and Blues should be labelled an immigrant story, it is a contemporary life story and a modern American story,” says Devi S Laskar

‘It is unsafe for the Mother narrator and her family to discuss racism—it is unsafe for them to say anything or react in any way; their silence is required in order for them to live in society,’ says Laskar. ‘But it doesn’t keep any of them from thinking about it, and from discussing it among themselves. As much as things are supposed to have changed in the past 60 years, their silence is deafening—and illustrates that not much has changed in America.’

With the events that visit the protagonist and her family, the novel seems unleavened by any kind of hope. But Laskar says that isn’t quite true. ‘It’s a cautionary tale, sure, but the novel is her moment to recount her life, and remember what is important,’ she says. ‘It is a literary conceit to have a life- flashing-before-your-eyes narrative. But it is somewhat true that when someone is going through an extremely difficult moment, you think very quickly about what’s important. I wanted to give that experience to the narrator—as a frame—so she could see that her life had meaning and importance; she was able to see beauty and experience love despite her circumstances.’

The mood shifts between whimsy, fear, tragedy, joy and rage, all as the narrator lies bleeding outside her home.

The novel packs itself in tightly at 253 pages with multiple short chapters, some as brief as a few lines, as we speed through rushes of the protagonist’s life, childhood montages and broken images. Laskar’s work as a poet and a reporter informed the form and structure. ‘I am very interested in compression and keeping things short,’ she says. ‘One of my writing coaches is a screenwriter and she introduced me to the Aristotle Incline structure that screenwriters often employ—I thought it was appropriate for my narrator to share her thoughts in this fragmented way. I understand that this approach is not for everyone, but I felt it was correct for my narrator.’

Indeed, the approach can be a challenge for the less adventurous reader, eschewing a narrative arc in the traditional sense, and bouncing between time and space, piecemeal impressions and memories.

Laskar also chooses to intersperse through the novel asides on the Barbie doll, referring to historical factoids or cultural moments around the iconic American toy. ‘I wanted to explore dolls in this book, and the Model Minority Myth,’ she says, on why she chose this periodic stylistic interruption. ‘Barbie dolls, to me, are setting an impossible standard of beauty for girls around the world. It is propagating a notion that you have to be skinny and white and blond and tall in order to be beautiful—and it’s also furthering the idea that women should be treated as dolls, put on display and be silent.’

But some of this feels heavy-handed. As do things like eating rice with ‘sour red lentil soup’, a passage about the Ramayana and ‘how the king and queen were banished into the forest for fourteen years’ or references to white clothes, ‘the colour of mourning in her parents’ world’ that seem positioned to over-explain the background to non- Indian readers.

Laskar has now returned to working on another novel she was creating and lost in the raid—a book called Shadow Gardens, ‘an ethnic, satirical retelling of Virginia Woolf’s Mrs. Dalloway and Michael Cunningham’s The Hours’.