A moral argument against power in the age of surveillance 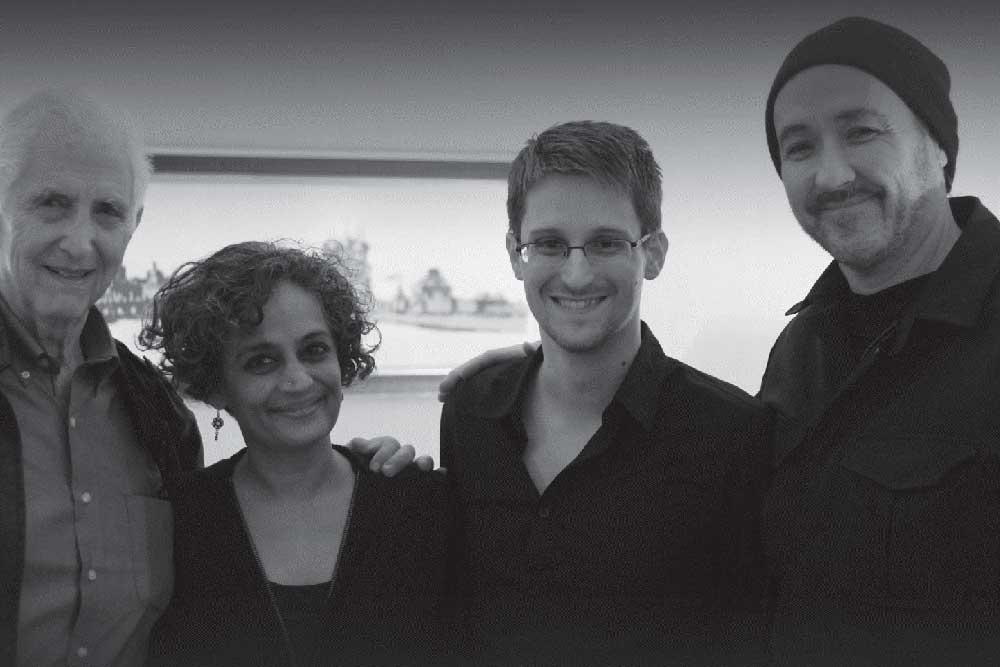 AFTER READING THINGS That Can and Cannot Be Said, the thing that can be said about Arundhati Roy—who co-authored this with American actor-activist John Cusack—is that she reminds you of Ijon Tichy, the hero in Polish science-fiction writer Stanislaw Lem’s 1971 mind-bender, The Futurological Congress, that is set in a seemingly Utopian future. Ijon discovers the government has been dosing everyone with powerful psychedelics called ‘mascons’ and literally goes underground to take a counteractive drug. It strips away layer after layer of the world to reveal a grim, cold, dystopian reality. TV news, Instagram, always-a-semifinal-around- the-corner cricket matches, instant pizza, pseudo-bawdy Bollywood fare— if these are our ‘mascons’, then Arundhati Roy is the counteracting agent who brings us face-to-face with our cold reality.

This brief book—was conceived out of conversations between Roy and Cusack over increasing government surveillance of individual life. Going by mainstream news coverage, you’d think this was an esoteric subject. However, the Turkish purge of 70,000 citizens from its government, military and even schools, following a failed coup d’etat attempt, conveys how we may have already realised the nightmare that George Orwell’s Nineteen Eighty-Four encapsulated in the slogan ‘Big Brother is watching You’.

Promisingly, Roy and Cusack travel to Moscow to meet Edward Snowden, the whistle-blower who uncovered the American super-secret National Security Agency (NSA) illegal surveillance on its own citizens through its collection of meta-data. They go with Daniel Ellsberg—the whistle- blower who published The Pentagon Papers revealing governmental lies and cover-ups in service of the US’s Vietnam War policy.

The book leaves you with mixed feelings, however. One, it’s too short. Second, there’s not enough Cusack. As politically savvy as actors Mark Ruffalo or Susan Sarandon, he’s far more sensible than empty-chair enthusiast Clint Eastwood (who addressed Mitt Romney’s convention) or failed TV child actor Scott Baio (who addressed Donald Trump’s convention). In their conversations, Roy is the typical Indian auntyji and Cusack can barely get a word in edgewise; his occasional utterances are more like exclamation points to her torrential dam-bursts.

Third, there is only a passing mention of Cusack and Roy’s meeting with Julian Assange, the Wikipedia founder-editor in hiding (from British snipers) within the Ecuadorian embassy in London for four years; and no recording and hence no transcript of Edward Snowden at the Ritz- Carlton near Moscow’s Red Square— Snowden barely mumbles a sentence or two in his conversation with Ellsberg.

Still, Roy holds forth and what she says is valuable. Long before Modi, she attacked the toxic nationalism of our times. Here, it produces gems like: ‘I mean what’s a country? It’s just an administrative unit, a glorified municipality. Why do we imbue it with esoteric meaning and protect it with nuclear bombs? I can’t bow down to a municipality… it’s just not intelligent.’

Roy jokes, as she and Cusack stroll through Red Square, that it ought to be privatised. They both have a healthy aversion to nationalistic symbols: ‘We must all bow down to the flags,’ he says, while she disdains the ‘minds that are shrink-wrapped in flags.’

And at the end, when Ellsberg recalls how at the Pentagon in 1958, he found that the US-USSR missile race was based on a lie—the Soviet Union in 1958 was determined to have just four atomic bombs, though the US public was told the USSR had thousands, leading to a ‘missile gap’—Roy provides the clinching justification: ‘Nuclear bombs are the logical corollary to the idea of the nation-state… no?’

Of course, there are moments of trademark Roy hyperbole, as when she mentions that her childhood in communist Kerala likened her to Vietnam’s ‘gooks’. But such moments are not serious speedbreakers. In the end, people like Roy and Cusack exist to remind us that moral righteousness is a moral imperative in these hyper- patriotic times, in our increasingly- technological modern super-states. Arundhati Roy is our vital antidote to these insane modern times.