Testing times for the bilateral relationship 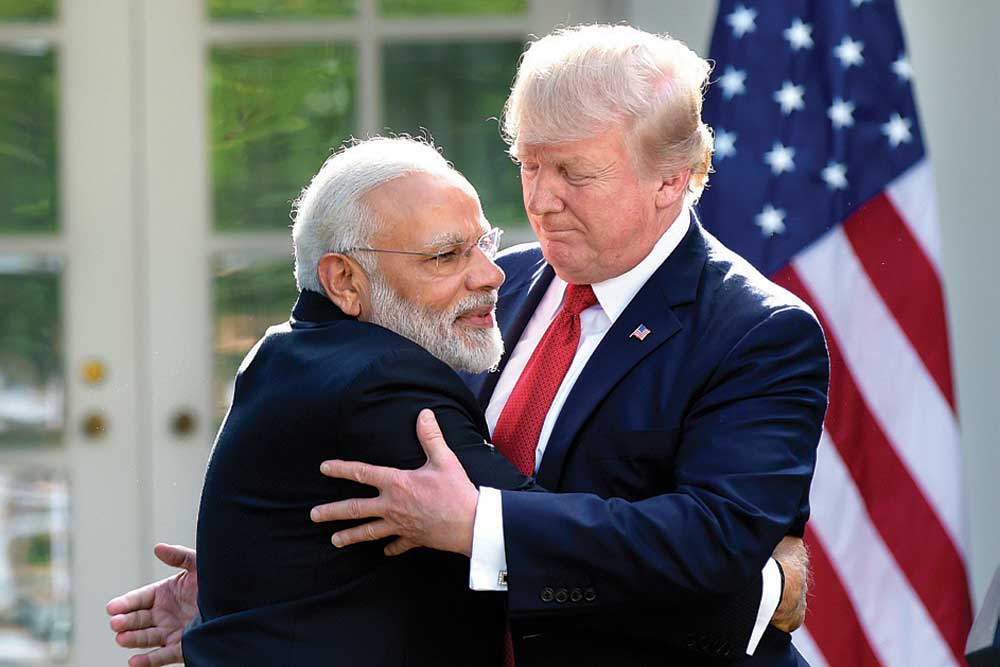 DONALD TRUMP HAS been upending and rewriting US foreign policy. Allies and adversaries alike are scrambling to discern, thwart and shield themselves from Trump’s policies. So is India. US-India ties have not soured but ebbed, marred by trade and economic friction, hand-wringing around waivers to exempt India from US sanctions and a fitful relationship between Donald Trump and Narendra Modi. Is this scenario the new normal in US-India relations or can both countries, again, find ‘common ground’? In Open Embrace, Varghese K George, The Hindu’s US correspondent, aims to answer this question by interrogating the politics and political ascent of Trump and Modi. George asks whether the ‘ultra-nationalist’ conjuncture fuelling Modi’s and Trump’s rise will stymie US-India relations or if both leaders can ‘make a deal’ to prevent that outcome.

George begins by mapping several fault lines of globalisation and slow economic growth and how this precipitated Trump’s ‘America First’ agenda. American primacy since the Cold War was frittered away by self-inflicted economic (the 2008 financial crisis) and political crises (9/11 and wars in Iraq and Afghanistan). These failures intensified political fissures around class and race. America’s identity crisis, as Varghese argues, sharpened, breeding acute political discord as critics, Trump amongst them, pounced on what they perceived as Obama’s declinist agenda. George elucidates these shifts with aplomb, but the narrative bulldozes along without heed to a sequence that could better grip readers.

George trips up in explaining Modi’s foreign policy, opting to morph from journalist to theorist for this task. The narrative meanders into a fruitless theoretical discourse on what George calls the ‘Hindutva Strategic Doctrine’ or the ‘ideological roots of Modi’s world view’. Synthesising various studies, George devises a new construct that, he claims, represents Modi’s foreign policy, highlighting factors like territorial unity, religion (Hinduism), culture, military heft and global solidarity. What makes this tangent problematic is that he assumes first that there is a Modi doctrine (or that there should be one), and second, that even if one exists, it is situated within tracts associated with political Hinduism or ‘Hindutva’.

The messiness of the current international order, not to mention India’s neighbourhood, militates against the formation or presumption of a doctrine that can clarify India’s foreign policies. And there are sufficient institutional and political reasons to argue that Modi’s foreign policy has not veered much from that of previous governments. There is a long—and unfortunately enduring— tradition in the study of Indian foreign policy to use certain ideas (mystical, religious and civilisational) to explain how and why India behaves abroad at the expense of institutional factors. George, puzzlingly, wishes to join that tradition. Had he stuck to his journalistic sensibilities, we could have had a political reading of Modi’s foreign policy.

George ably gauges how India has fared under Trump. In both countries, public spheres have coarsened, institutions been pummelled, minorities threatened and the media besieged. The persistent demonisation of the ‘other’ under Trump increases the threat of violence against Indians and Indian-Americans. George incisively recognises that the politics around economic policies is being reoriented in the US, tilting from the interests of corporations, patrons of the H1B visa, and trade liberalisation toward the working class and reciprocal trade, a trend that does not bode well for US-India ties.

What does one make of bilateral relations now? Trump and Modi have not furthered them. Progress has been sporadic. Irritants, not opportunities, lurk. ‘America First’ does not comport with India’s rise; and neither does a Trump administration looking to coercively extract benefits from an international order whose costs it has borne for decades, a scenario that augurs poorly for India that has depended on others to shoulder the externalities of its rise. As US president, Trump is unlikely to embrace India.