AM Homes: Where Weird is Wonderful

AM Homes, a master of suburban Gothic noir, explores the existential question of how to live and how to be 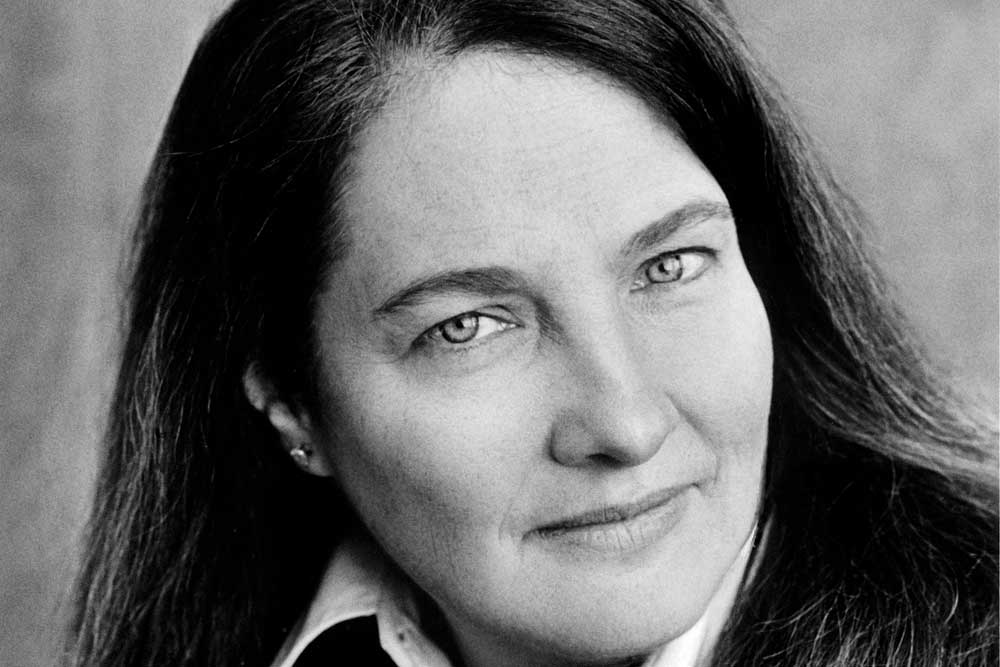 AM Homes is the author of 11 books, including short stories, novels, a memoir and an unclassifiable book about Los Angeles. Critics have called her the ‘chronicler of America’s suburban nightmares’, a ‘purveyor of suburban Gothic’ and a writer of ‘weird ambition’. Homes acknowledges that she pushes things to emotional or landscape extremes in order to tell a story, but she believes those extremes have gotten closer to reality. “It’s funny to say that my work sort of anticipates things like this, but now that it’s really happening, I’m quite disconcerted.” As a teenager, she took a year off school and wrote a book of poetry called An Introduction to Death, with Excerpts from Life. JD Salinger once threatened to sue her. And her list of mentors will arouse envy in anyone— Edward Albee, Grace Paley, Angela Carter, Thomas Keneally. She won the Women’s Prize for Fiction for her novel, May We Be Forgiven, and has received several other awards, including a Guggenheim Fellowship and the Deutscher Jugendliteraturpreis. She currently teaches creative writing at Princeton University and frequently writes for television. Her most recent book, Days of Awe, is a collection of 13 short stories. Before speaking to her, I asked her publicist to confirm whether the A in AM stands for Amy. “Yes,” she said, “But don’t call her Amy. Everyone calls her AM.”

WHEN I TELL AM Homes there’s an awfulness about her characters, she laughs gleefully and leans in: “Say more!” Earlier stories and novels have involved a yuppie couple who experiment with crack to escape the boredom of marriage, a paedophile and child- murderer protagonist, and a woman who is chased down Rodeo Drive by a pack of feral Chihuahuas. Days of Awe is a more tempered collection, ranging around the central question of how we move through the world.

Homes is interested in surfaces and bodies, in how technology is changing our relationship to privacy, and the basic philosophical question of how to live and how to be. It is not unusual for her characters to meet at a Genocide(s) conference to discuss the nature of grief while bonking under an apple tree, or to trade life stories in a chatroom for budgerigars. She doesn’t think of her characters as overly weird or peculiar, but psychologically, she admits, they struggle. “I think there’s a sense for many of them that they’re not who they thought they’d be, which is human, you know?” Everything is unexpected in a Homes story, until it is not.

“I’m often writing about the split between our public and private selves,” she says. “How we want the world to see us— charming, lovely, engaging, versus how we might be off-screen. I think that split has always been part of human identity and contradiction, but now that the internet is such a part of people’s lives, we have these avatars of other personas and we’re losing the integration of self in an old-fashioned sense. It makes it hard to move through the world if you’re fractioned, so I’m always examining those fractures and the pain of those fractures.”

The title story, ‘Days of Awe’, refers to the 10 days between the high holy days in the Jewish religion, which is a time for considering who you are and to ask for forgiveness. “In the larger sense,” Homes says, “days of awe can mean horror, and it can also mean amazing. We’re living in a moment where experience is divided right on that line of terrifying and astounding.” Many of the stories in this collection tread this line. Homes is particularly good at taking feel-good American symbols like Disneyland, Thanksgiving, Barbie—exposing them for their sentimentality and subverting them. She punches out sentences with such eviscerating effect, I’ve scribbled the word ‘goddamn’ in the margin several times.

Consider this sample: ‘Why are you oxygen-dependent? Are you really fat?’ or ‘I have one of his ball hairs… It’s what the women who slept with him did. We’d take a hair, put it in a clear glass ball, like how people do with dandelion pods, and wear them on a chain around our neck.’ One of Homes’ mentors is the playwright Edward Albee, who undoubtedly helped unleash her strapping dialogue skills. Like Albee, Homes is also adopted, and the sense of being an intruder in one’s own life pervades the work. When she was in her thirties, she wrote about the experience of meeting her birth parents (she imagines having sex with her father) in her memoir, The Mistress’s Daughter. Her human relationships are classified by the extent of brittleness they can bear, and ultimately lead to bursts of violence—a brother pummelling another, a Ku Klux Klan uniform hanging in an antiques store.

For all the suburban Gothic noir that Homes has made her territory, in real life, face to face, across a cob salad and fries in the lobby of the Ned Hotel in London, she is forthright and downright cheery. “It’s not like I sit down and think, ‘Oh, that’s what I’m going to write about’, but the idea of children who have been left behind in some ways is important to me. It’s funny, we live in a world where people say we pay too much attention to our children [Homes has a daughter, Juliet], but we’ve come out of a generation where parents did what they wanted to and didn’t think a lot about what happened to their kids, so yeah, it does interest me, this sense of powerlessness—how does one find power in their own family and their own life?”

For many years, Homes identified as ‘a very American writer’ because she was interested in the American lack of interest in history—their own and other people’s, and particularly in the way that Americans wrote women and people of colour out of history. “At this point, as much as I want to be able to love my country, and I do love my country, I think it’s uncomfortable now—the question of American identity. Who are we to ourselves and to a larger world? We don’t even have language for that right now because all the things the country was founded on don’t seem to be operational.”

One of the stories, ‘A Prize for Every Player’, is about a family who go shopping at Mammoth Mart. Father, son, mother and daughter divide into teams to compete for who can get the best deals in the least time, during which, daughter finds a baby in the towel department which she’d like to buy, and husband, after an impromptu speech about the good old days, finds himself becoming a candidate for president. Homes’ characters are frequently nostalgic for an America that is more wholesome, less alienated. But was there really such a time?

HOMES BELIEVES THAT the post-World War II generation did embody the American dream of prosperity and possibility, where children were guaranteed a better life than their parents. That dream is now reversed because people know they’re not going to make more money than their parents or move to better places. In fact, they’re going to struggle to keep afloat. “That’s become an incredible source of disappointment to people,” she says. “And when you have that kind of disappointment, who do we hold responsible? Our government? Ourselves? That’s how Donald Trump got elected, because he spoke to that frustration that wasn’t being attended to. He articulated things that people were concerned about. Other politicians were so immersed in the traditional political process that they didn’t talk about that. It’s super scary that that awareness, that articulation, came from Trump and not from somebody who had a larger vision.”

Days of Awe could alternatively have been titled, ‘Where do we go from here?’, which is a line one character says to another, and a recurring theme in the stories. Throughout our conversation, Homes utters the phrase “how we move through the world” and this taking stock, this questioning, is more central to her than the traditional American idea of redemption. “Grace Paley would talk about whether writing was a political act, and she’d say ‘no’. If you hire a plumber, they’re just coming to fix your sink. If you hire a writer, they’re just writing a story. I’m interested in ethics, morality, philosophy, but I would never presume to say this is what this should mean. I constantly engage in asking questions. Personally, whatever I’m reading, whether it’s a poem, non-fiction or fiction, I want it to make me think, to ask questions, not to answer them.”

In the first story of the book, ‘Brother on Sunday’, there’s a scene where a plastic surgeon examines himself in the mirror and inserts face fillers into his cheeks. In other stories, a woman’s husband leaves her because her tits are too hard, a family in LA goes to a restaurant where they only serve designer-size macrobiotic bites, and a woman chokes to death but no one can tell because she’s so Botoxed. For Homes the body is a source of awe—in that dichotomous Mobius-strip amazing-terrible kind of way. She focuses on the disconnect of bodies—the alienation, sterility, numbness. But she also allows that the body is a vehicle of grace and sexuality. “I find it interesting, the idea that you only get the one body, ostensibly. You have to live with it, make friends with it, make peace with it, redecorate it, care for it, not care for it. There’s a lot we can do now with our bodies scientifically or medically, but we’ve just not caught up emotionally.”

Despite the many disappointments and fissures Homes explores in her fiction, she says she’d like to be optimistic in real life. She believes in invisible mentors—people we’ve never met, but whose work opens ground for us (Susan Sontag, in her case). She believes the younger generation might be capable of mapping their own way, that post #MeToo, men and women might re-engage with each other in ways that aren’t violent but filled with joy, curiosity and pleasure. Mostly though, she’s optimistic that literature won’t be surpassed by television shows. “When we go back and discover lost societies and lost worlds, we discover them by what they left behind—artefacts, illustrations, whatever their language was. We don’t discover them by their Twitter account, you know what I mean?”

He examines himself in her makeup mirror. He raises his eyebrows, bares his teeth, smiles. And then he smiles again, harder, showing gum. He tilts his head, left and right, checking where the shadows fall. He turns on the light and flips the mirror to the magnifying side. A thin silver needle enters the reflection; there’s a close-up of skin, the glistening tip of the needle, surrounded by a halo of light. He blinks. The needle goes into the skin; his hand is steady on the syringe. He injects a little here, a little there; it’s just a touch-up, a filler-up. Later, when someone says, “You look great,” he’ll smile and his face will bend gently, but no lines will appear. “Doctor’s orders,” he’ll say. He recaps the syringe, tucks it into his shirt pocket, flips the toilet seat up, and pees.