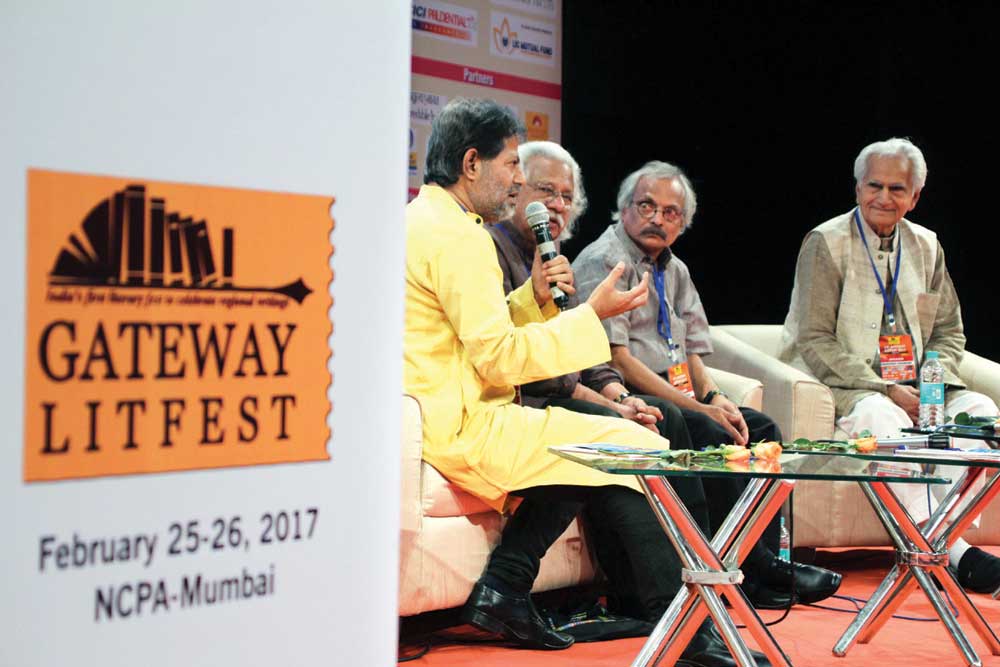 THE THIRD LIC Gateway Litfest delighted me for a selfish reason. Unlike other literature festivals, it brought together a crowd of 50 speakers of 15 regional languages. The inauguration ceremony too was unique. Each guest signed the map of India in their mother-tongue. One could even visualise Bharat Mata on the map, not in the form of a sari-clad upper-caste woman but as a Dalit Kali with a thousand tongues around her neck. That would be her true picture. Her identity lies not in her vital statistics but in the number of her tongues. When you think about tongues and poems, how can you not remember Khanaa by Mallika Sengupta:

‘In Bengal in the Middle ages / Lived a woman Khanaa, I sing her life / The first Bengali woman poet / Her tongue they severed with a knife / Her speechless voice, ‘Khanaar Bachan’ / Still resonates in the hills and skies / Only the poet by the name of Khanaa / Bleeding she dies.’

This poem came to my notice when I was writing about Khanaa in Aaraachar (Hangwoman). It seemed to me that Khanaa and her tongue symbolised many facets in the Indian context, like democracy, a woman and her sexuality, as well as life and creativity. But while sitting at the National Centre for the Performing Arts (NCPA) , Mumbai, listening to the legendary film director Adoor Gopalakrishnan, the renowned Malayalam novelist M Mukundan, the Jnanpith winner from Gujarat, Raghuvansrai Choudhari and Sambalpuri poet Haldhar Nag, in the inaugural session chaired by Bengali writer Subodh Sarkar, it struck me that Khanaa and her tongue could symbolise India and its many literatures as well.

I sat there, my heart brimming over, when Haldhar Nag was presented with a lifetime achievement award. The dais depicted the true picture of our country’s many languages—the half-naked Nag can speak only Kosli, Raghuvansh Rai Choudhari spoke Hindi and others, English. Nag is a tribal, an elementary school dropout, yet his poems are topics for PhD theses and Kosali is a language without a script, yet it can boast of volumes of poetry. I was happy to realise once again that a living language doesn’t need a script to create fiction and poetry. Even if it doesn’t have a script, its poetry will thrive, its stories will survive. All it needs is someone who speaks and someone to listen!

My first literature festival was in Jaipur. I had felt like a grain of salt in an ocean of world-famous writers. The identity crisis was intense, as people would ask, “So which language do you write in, Malayalam or Tamil?” The experience of a regional language writer was clearly illustrated by M Mukundan with a personal anecdote. When a prestigious literary award was instituted, his novel was selected for the best translation award (little wonder because Indian fiction means Indian English fiction only). After the award ceremony, the authors were invited for the book signing session. Mukundan described how insulted he felt when a long queue appeared in front of the English author, while he sat in an empty booth. It was easy for me to empathise with him, not because I am a writer in Malayalam, but because I have attended enough festivals outside Kerala. You will be surprised to know that there are many books in Malayalam which sell more than many English bestsellers.

In 2014 Mohan Kakkanadan and his friends met me in Goa to talk about the Gateway festival. I had asked many questions, like who will be the audience; who will be speaking and in which language. Finally, after three years, I feel proud of Mohan Kakkanadan, M. Sabarinath, Joseph Alexander and MG Bennichan, the tetrad behind the fest, not only for establishing it as the biggest festival of regional language writers but also for conducting meaningful discussions like the one on script-less languages of India.

Almost all the sessions discussed how regional languages are being overshadowed by English. In my session too, the question of translation was raised. It is unquestionable that translation into English gave me access to the wider world outside Malayalam. But should I aspire to write in English? For a woman in India who cannot get Khanaa out of her mind, it is wiser to have at least two ‘tongues’. So that even if the world cuts off one, the other will continue talking.