A Hanging in History 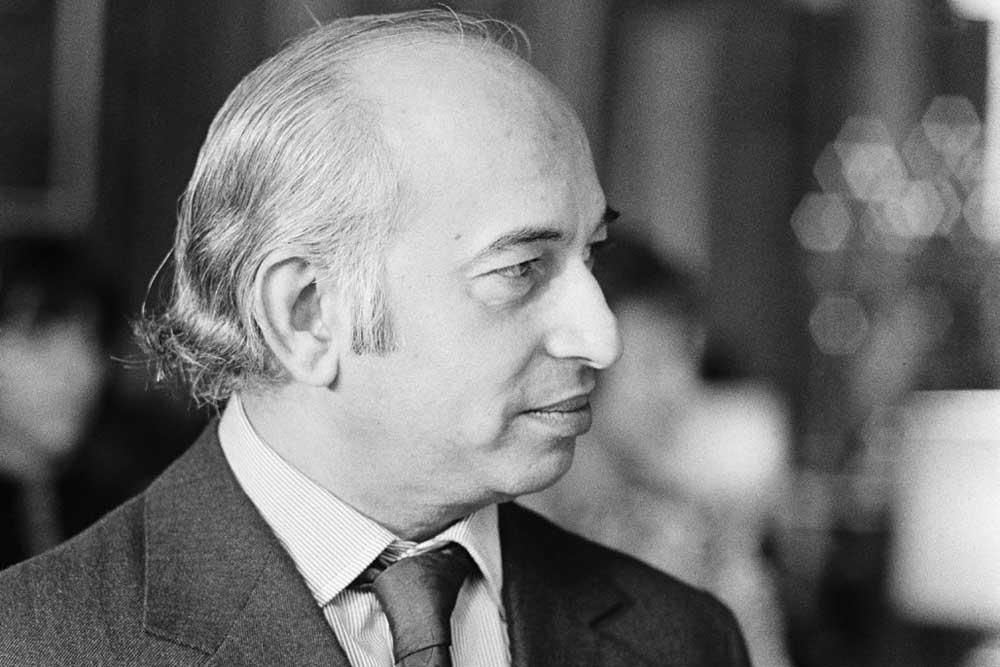 IN BORN TO Be Hanged, author Syeda Hameed likens Pakistan’s late Prime Minister and President Zulfikar Ali Bhutto to the protagonist of a Greek tragedy. Hameed draws parallels between Oedipus of Thebes and the ‘boy from Larkana’ Bhutto, both ‘larger than life’ men who were cursed by the gods to die a horrific death. The author confesses that for 20 years, she has ‘lived’ with a man she has never met. Her research over the span of these two decades comes primarily from speeches, letters, interviews and archives from the Bhutto family’s personal library. For her research, Hameed interviews Dr Mubashir Hasan, Bhutto’s close associate and co-founder of the Pakistan’s Peoples Party (PPP), a number of times. His personal anecdotes and perspective on Bhutto provide a distinct voice and lend a unique quality to Hameed’s book.

The author describes Bhutto as a suave, idealistic and popular leader with a clear vision for his country. Bhutto wanted Pakistan to be an inclusive democracy, strengthened with a socialist economy. He was determined to construct a modern Islamic country with international stature to balance what he saw as an aggressive Hindu-India. Bhutto’s charm, eloquence and ability to create an image and vision for Pakistan that resonated among the masses made him an extremely popular leader. His ‘progressive-Islamist’ image was also one that held a strong resentment against Hindu-majority India. This is reflected in Bhutto’s speeches at the United Nations Security Council in 1965 and 1971, where he promises to wage a ‘war of defence for a thousand years’ against ‘unwarranted aggression’ by India. Hameed refers to one of Bhutto’s UN speeches as ‘one of the most iconic speeches given by a foreign minister’ at the Security Council.

The book briefly discusses Pakistan’s 1971 general election that ultimately led to the uprising in East Pakistan and formation of Bangladesh. Dr Hasan, speaking to Hameed, says that Bhutto wanted to make common cause with Mujibur Rahman of the Awami League and that leaders of the PPP went ‘back and forth to East Pakistan trying to build bridges.’ The book, however, does not provide any document or anecdote of Dr Hasan’s that would shed light on Bhutto’s position on the events that led to the separation of East Pakistan. It was because of Bhutto’s refusal to accept the Awami League’s overwhelming mandate and Rahman’s ascension to the post of prime minister that martial law was declared and the struggle for Bangladesh’s independence began. General Yahya Khan’s violent military aggression against East Pakistanis is a well-documented historical fact and it’s unfortunate that it does not find any mention in this book, given Bhutto’s role at the time.

The book glosses over another important detail. The author briefly mentions the signing of the Shimla Agreement between Bhutto and Indira Gandhi in 1972. She describes the agreement as a ‘great victory for Pakistan’. Given that it had just been defeated in the 1971 war, it can be argued that it was a ‘good’ deal as India withdrew its troops from Pakistani territory and returned Pakistani prisoners-of-war. There is no mention of what India asked in return: the release of Mujibur Rahman who was on death row in Pakistan.

Hameed writes of how the Inter-Services Intelligence (ISI) agency fed Bhutto with numerous misleading reports about his own party members, sowing seeds of doubt and mistrust in his mind. It is significant that she writes of this, as it illustrates the extraordinary nature of the relationship between civilian governments and the ISI in Pakistan.

Hameed’s vivid portrayal of Bhutto is definitely a work of many years of love and dedication. While her research along with Dr Hasan’s perspective has lent a certain bias in their construction of Bhutto’s character, the book must be read as the depiction of a man by those who admired him and understood his vision for his country. While the book depicts Bhutto as a charming and eloquent political leader, Zulfikar Ali Bhutto will remain etched in history as a controversial, power-hungry and idealistic ‘boy from Larkana’ who shaped the history of Pakistan.