Is camel milk a health food? 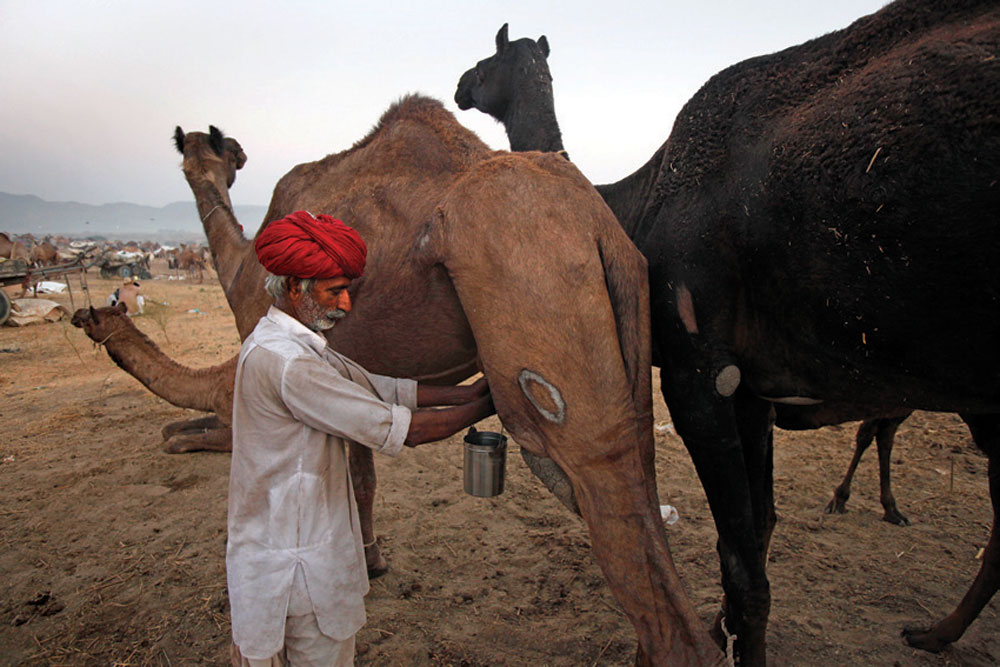 ‘[What is needed] is the refusal to accept anything without testing and trial, the capacity to change previous conclusions in the face of new evidence, the reliance on observed fact and not on pre-conceived theory—all this is necessary, not merely for the application of science but for life itself and the solution of its many problems.’

—Jawaharlal Nehru,
The Discovery of India (1946)

DESPITE THE EXHORTATIONS of our leaders for decades, beliefs continue to override evidence, opinions hold sway over facts, and it is a challenge for people to figure out the truth. The field of health and wellness is one of the worst affected by this syndrome and is flush with false information. Food fashions, often pushed with commercial motives, change every year. One recent phenomenon that seems to have taken hold of the affluent, urbanised Indian relates to the perceived adverse impact of consuming buffalo and cow milk. From being a nectar of the gods, milk has suddenly become a villain of sorts and responsible for all our ailments. This milk phobia is leading to a quest for alternative sources of milk for human consumption.

A plant source of milk to become fashionable was soya milk, known for its low-fat, lactose-free and high-protein (although lower-calcium) content. It did not really tickle the Indian palate, though, and its popularity seems to be waning. Almond milk is becoming increasingly popular in India, of late. Though it is low in fat, its protein content is lower than cow’s milk.

A recent announcement by India’s leading dairy of its launch of camel milk has created a buzz in the market and rekindled interest in this source of milk.

Camel milk has been in use for millennia by desert communities. It has been mentioned in ancient Ayurvedic texts. Camels can go for 21 days without water and continue to produce milk even when fed low-quality fodder. The constituents of camel milk can also vary between species and geographies. Camel milk contains almost three times more vitamin C than cow milk. It is also rich in vitamin B1 and higher in its iron (tenfold!), potassium, magnesium, copper, manganese, sodium and zinc content. On the other hand, it is lower in vitamin A and B2 content than cow’s milk. It is supposedly less allergenic because it does not contain A1 casein and lactoglobulin. The protein and carbohydrate content is of camel and cow milk is generally similar. Fat content of camel milk is however significantly lower.

One of the most discussed properties of camel milk is its ability to treat diabetes—both the childhood, insulin dependent Type 1, and the more common adult Type 2 diabetes. Several studies have shown that adding 500 ml of camel milk to the diet of Type 1 diabetes patients for about three months to one year led to a modest reduction in fasting glucose level and Hba1c, but the sample size was small, and a comparison was made with cow milk only in one study. A few studies have also been carried out on the effects of camel milk on the more common adult, Type 2 diabetes, with mixed results. The small sample size and short duration of intervention in these studies precludes any definite conclusion in both types of diabetes. Another argument commonly advanced in favour of camel milk is the low prevalence of diabetes in communities that consume it. Whether this is because of the active physical life these individuals lead or truly because of camel milk remains unclear.

Various mechanisms have been proposed to account for the putative benefits of camel milk in diabetes. Camel milk contains a high concentration of insulin, which resists coagulum formation in the stomach and could be absorbed into the blood stream. In addition, camel milk has small insulin-like molecules that act like insulin. Most recently, camel milk has been shown to have properties of inhibiting DPP4 enzyme—a property shared by a popular class of drugs used in the treatment of diabetes (the gliptins). Camel milk also contains large amounts of immunoglobulin, lactoferrin, lactoperoxidase and other proteins which could potentially have antioxidant, immunity-enhancing and other beneficial properties. Camel milk consumption has also been associated with benefits in medical conditions like autism and autoimmune conditions.

What, then, is the current status of camel milk as a health food? Camel milk has some beneficial properties, undoubtedly. Whether these translate into actual health benefits, including its effect on diabetes, remain unclear at present. You could consider using it if you have a problem with regular cow or buffalo milk. Or, you could just try it as a novelty. If nothing else, it adds another option to our milk choices.