What should you do if you are diagnosed with fatty liver? 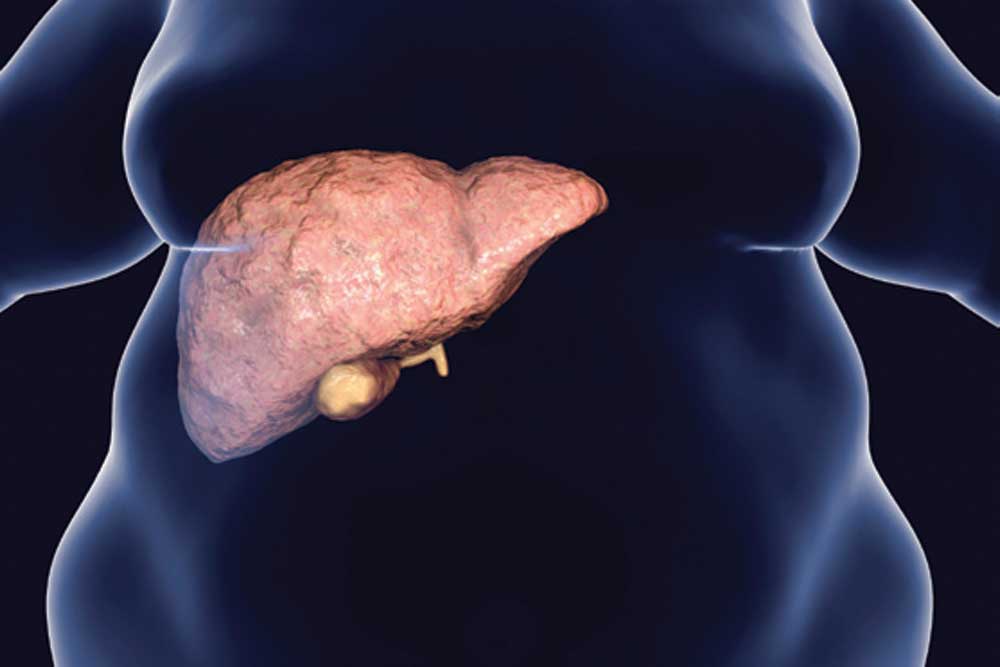 ONE OF THE most common conditions that we see in the clinic these days goes by the name of ‘fatty liver’. Most of my patients with diabetes have some abnormality in blood tests done for liver functions, which suggests a fatty liver. The report could be with an ultrasound, done for other purposes, which says ‘Fatty Liver Grade X’. Most often these patients have no liver-related symptoms and it is a chance finding. It does however create a flutter in the patient ’s mind—and more often than not, patients start attributing all their abdominal symptoms to the liver abnormality.

Put simply, fatty liver means deposition of fat in the liver. The liver is a large organ on the right side of our abdomen below the rib cage. It receives a generous blood supply which helps it extract energy from the food we eat, and also helps it rid our body of toxins. Some fat is present in the liver normally, but this is less than 5 to 6 per cent as measured by sophisticated tools like MRI scans. On studying liver tissue under the microscope, less than 5 per cent cells normally contain fat deposits. Fat in excess of this constitutes fatty liver disease. Non-alcoholic Fatty Liver Disease (NAFLD) is the medical term commonly used for fatty liver. When this fat persists in the liver, it causes inflammation, and when this inflammation is demonstrable on a biopsy, it is called Non-alcoholic Steatohepatitis (NASH). Other than people with diabetes, those who are obese and have high blood pressure or cholesterol problems (metabolic syndrome) are prone to develop a fatty liver. Alcohol intake can produce liver diseases on its own, but also aggravates fatty liver disease.

When I was training in endocrinology in the 1980s, a fatty liver was not considered a disease. Recent research indicates that fatty liver disease is more common than previously thought, and the consequences, far from being benign, can actually be devastating. Fat in the liver first leads to inflammation, then fibrosis, then frank liver cirrhosis, liver failure and can even lead to cancer.

A fatty liver and its consequences have long been the domain of liver specialists. However, increasing recognition of the association between diabetes and this condition has brought it centrestage for endocrinologists. More than two thirds of obese type 2 diabetes (the non-insulin requiring type) adults have some degree of fatty liver. About 5 to 10 per cent of these will go on to develop inflammation. Not only that, fatty liver has been linked to an increase in heart attacks and stroke. Of late, it has been shown that neither lean type 2 diabetes, nor well-controlled patients are immune to it.

Why do people with diabetes suffer from fatty liver? In the usual adult onset type 2 diabetes, which is caused by a combination of insulin resistance and insulin deficiency. If insulin is unable to act properly, fat tends to accumulate in the organs including the liver. The condition produces no symptoms till it has reached the advanced stages of cirrhosis or liver failure.

Fatty liver can be detected in its early stages by the use of sophisticated ultrasound based technology—like fibro-scan and elastography; the most sensitive and non-invasive method of detection uses MRI-based technology. Tissue confirmation by performing a needle biopsy is the gold standard for diagnosis.

Treatment choices for fatty liver are limited. Lifestyle changes are the key and can even reverse the condition in its early stages. Vitamin E has been used with limited benefit and has not been shown to be safe in long-term use. Anti-diabetic drugs like pioglitazone and metformin have also been used but none has reached the stage of approval by regulatory authorities. More recently, anti-diabetec drugs that act via the GLP1 receptor (for example, Liraglutide) have been shown to be of some use.

SGLT2 inhibitors are a new class of anti-diabetics that act by throwing out blood glucose via urine. Since these drugs cause weight loss by reducing body fat, our group studied empagliflozin, a popular SGLT2 inhibitor and its impact on liver fat. Our study, presented at the American Endocrine Society this year and published in the journal Diabetes Care showed that empagliflozin reduced liver fat significantly in patients with type 2 diabetes and NAFLD. We do not know yet whether treatment with empagliflozin reduces liver inflammation and prevents liver fibrosis. However, our study has opened up the possibility of using SGLT2 inhibitors as treatments for this condition.

What should you do if you are diagnosed with fatty liver? Diet and exercise remain the basics of management. Weight loss and a better control over diabetes are helpful. And new anti-diabetic drugs might just provide the answer.