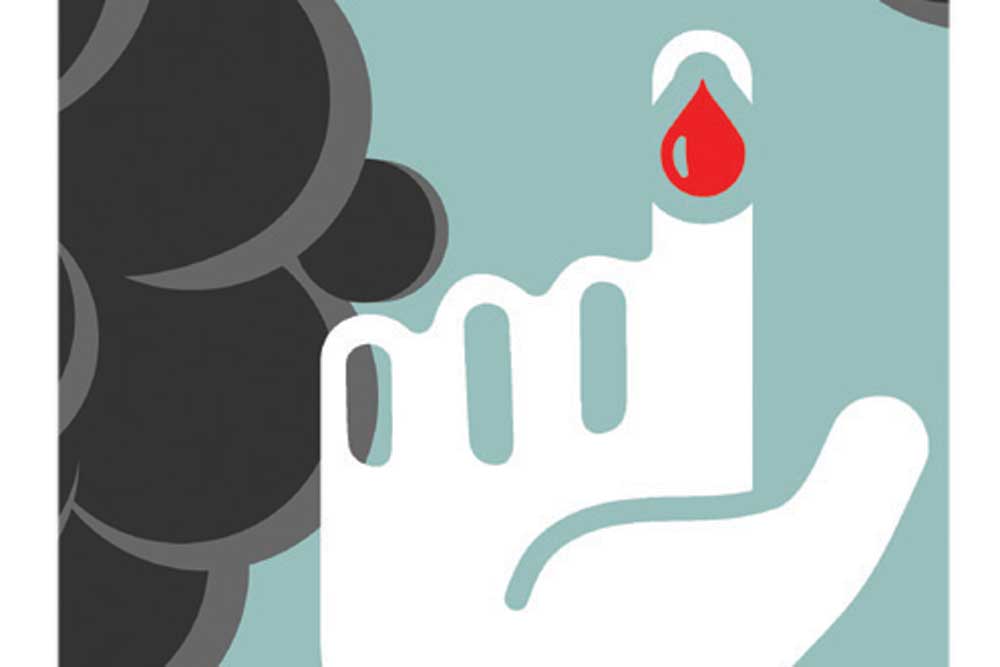 LIVING IN MODERN Indian cities is like living in a gas cauldron. Thirteen of the world’s 25 most polluted cities are located in India. Delhi, for example, is twice as polluted as Beijing, and ten times more than London. Air pollution can cause an increase in numerous diseases, the most obvious being lung disorders like asthma, bronchitis and pneumonia. Over the years, it has become evident that several other serious, potentially life threatening conditions—heart disease, stroke, cancer and kidney disease—are also linked to air pollution.

New research tells us we may have to add more to this list. Diabetes has also been found to be linked to air pollution. Diabetes in Indian cities has increased almost tenfold in the last four decades. One of its striking features in India is the rural-urban divide. Diabetes prevalence rates in metros are more than double those in rural areas. While this has been attributed to reduced physical activity and dietary changes, there has always been a concern that other factors could be contributing to this staggering increase in diabetes overall, and in particular, the rural-urban differences.

Data over the last few years suggests that air pollution may be playing a role in this rise of diabetes. Air quality or outdoor air pollution is represented by the annual mean concentration of particulate matter, PM 10 (particles smaller than 10 microns) and PM 2.5 (smaller than 2.5 microns), which are about 25 to 100 times thinner than human hair. In a landmark study published in the Lancet (‘Planetary Health’) this June, researchers at Washington University and the US Veterans Affairs’ Clinical Epidemiology Research Center followed 1.7 million veterans with no prior history of diabetes for 8.5 years. Increasing PM 2.5 levels were found to be associated with rising diabetes. This association was evident even at levels of particulate matter normally considered safe. As particulate matter crossed 12 mcg (the recommended upper limit), 24 per cent of people developed diabetes. Overall, it was estimated that 14 per cent (3.2 million) of all new cases of diabetes worldwide in one year could be attributed to air pollution. Highly polluted countries like India and Afghanistan are the worst sufferers. It is worth recalling that the average level of particulate matter (PM 2.5) in Delhi last year was above 200 mcg, which is about twenty-fold higher than the acceptable range. This research study also opens up the possibility that reducing pollution may reduce diabetes rates across countries, particularly in heavily polluted countries like India.

How does air pollution increase the risk of diabetes? Tiny particulate matter (PM2.5) enters our bloodstream via our lungs, causes oxidative stress and excites inflammation in fat tissue, leading to insulin resistance. It may also reduce insulin production. Outdoor air pollution can affect diabetes in less direct ways too. Polluted environments are often a reason for people to avoid outdoor activity, including walking. Reduced physical activity plays a major role, both in increasing diabetes rates and aggravating complications. The stress produced by living in polluted environments may by itself aggravate the risk of diabetes.

A question I’m asked repeatedly pertains to the safety of outdoor activities in a polluted environment. One of the chief ways to combat pollution is to reduce the use of emission-producing modes of transport like cars, the main emitters of PM2.5. This will necessarily increase walking or cycling. If people are reluctant to walk or cycle because of the poor quality of air, there will be greater use of cars, increasing pollution and further deterring people from walking. A study by the University of Cambridge showed the health benefits of walking or cycling outweigh the negative effects of pollution. Dr Mark Atinio, the lead author of the study, is quoted as saying even in Delhi people would need to cycle over five hours a week before the risk outweighs the benefits. So don’t shun outdoor physical activity, even in Delhi. However, during peak pollution in winter, it may be prudent to wear a mask and avoid early morning outdoor activity. Exercise in the middle of the day may be impossible given the hectic lifestyles and lengthy commutes of most metro dwellers. Instead, indoor exercises may have to be resorted to. Breathing exercises like anulom- vilom , a yoga practice, are very effective in clearing your airways of accumulated dust and dirt.

There is an urgent need for effective policies to reduce pollution. In India, it may mean abolishing crop burning, reducing the use of cars, relocating polluting industries and imposing stricter norms on construction, among other measures. The addition of diabetes to the ever-growing list of pollution- associated health disorders only adds gravity to an already grim situation.