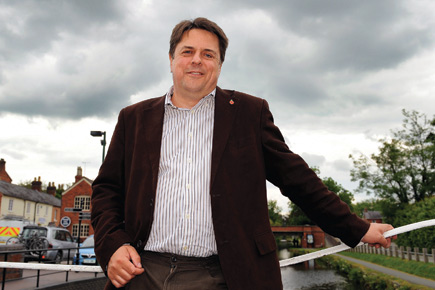 
Nearly eight million Britons, half the country’s TV audience, watched the BBC’s Question Time show live last week. It had a panel of political heavyweights and an angry audience ranged against a single man and his dream of a ‘Whites only’ country. The man was Nick Griffin of the British National Party (BNP), the far-right formation against the ‘browning’ of Britain through ‘unchecked immigration’. In recent years, the party has found more electoral support than proponents of a multicultural Britain can bear; apart from 56 local councillors and a London Assembly seat, it boasts of two European Parliament members.

The next general election might see the BNP enter the hallowed House of Commons, and it is this possibility that drew the TV show all those eyeballs. In doing so, Britain’s public broadcaster triggered off a furore. Its very decision to invite Griffin to the show turned many apoplectic with rage, with serving cabinet member and Welsh secretary Peter Hain leading the protests. “The BBC should be ashamed of single-handedly doing a racist, fascist party the biggest favour in its grubby history,” he said. “Our Black, Muslim and Jewish citizens will sleep much less easily now that the BBC has legitimised the BNP by treating its racist poison as the views of just another mainstream political party when it is so uniquely evil and dangerous.”

The broadcaster did not relent. Mark Byford, its deputy director general, said: “It’s much more important for the BBC to be seen to be demonstrably fair and to be upholding the democratic rights of a party that’s allowed to stand, that has got that level of support, to then be scrutinised by the British public that own the BBC.” Incidentally, in 2003, the BBC had disallowed a BNP spokesperson from appearing on Question Time in Burnley in Lancashire—then considered a BNP stronghold with three councillors and 10,000 votes. The BBC argued then that local councillors are not usually among the political panellists, who are typically parliamentarians. This time round, the BNP did meet the criterion, thanks to its European MPs.

Prime Minister Gordon Brown, keen not to be accused of muzzling any voices, observed just before the show: “I believe we have got a duty to expose the BNP for [their] racist and sectarian politics… In a recession, people are tempted to vote against their traditional voting patterns like voting Labour, which we regret.” Asking Justice Secretary Jack Straw to debate Griffin on TV, he said, “I hope that the exposure of the BNP will make people see what they are really like.” The Conservative party was represented by the no-nonsense Baroness Sayeeda Hussain Warsi, a peer and shadow communities minister.

Unconvinced, anti-racism groups staged protests outside the BBC studios, and police had a tough time sneaking Griffin inside through a side gate. Anti-Racism Network’s Barbara Muldoon, who took part in a protest in Belfast, said: “He isn’t like any other politician, he is the leader of a fascist party whose views are absolutely abhorrent.”

With the air thus charged, the live show began. “Given that the need for the Second World War was fuelled by the need to disarm oppressive and racist regimes, is it fair that the BNP has hijacked Churchill as its own?” asked a White male in the audience. Replied Nick Griffin, “He would be with the BNP because of what he said about mass immigration into this country and for the fact that in his younger days, he was extremely critical of the dangers of fundamentalist Islam in a way which would now be described as Islamophobic. The effort of the first and second World Wars was designed to preserve British sovereignty and British freedom which Jack Straw’s government is giving away lock, stock and barrel to the European Union, and to prevent this country being invaded by foreigners.”

“Where do you want me to go?” asked an agitated Asian immigrant, “This is my country. I love this country and am part of this country. I was born here, educated here, and you would be surprised how many people will whip around and buy you a ticket and your supporters to go to the South Pole.” Griffin smiled in response.

There were several such exchanges, and the outspoken BNP leader aired his views on several touchy issues. Islam, he said, had its “good points… it wouldn’t have let the banks run riot”, but did not fit in with “the fundamental values of British society, free speech, democracy and equal rights for women”. On homosexuality, he played to what he doubtless considered the galleries—“A lot of people find the sight of two grown men kissing in public really creepy. I understand that homosexuals don’t understand that, but that’s how a lot of us feel. Christians feel that way, Muslims, all sorts of people.” On his alleged Holocaust denial, he declared himself both misquoted and undecided on his convictions.

After the show, Griffin described the crowd in the studio as a “lynch mob”. The UK’s political class, however, was too busy heaving a collective sigh of relief to take offence. Griffin’s remarks were widely derided across the media. Even Twitter was agog with put-downs, and everyone seemed sufficiently pleased to have rubbed a racist’s nose in the mud. Only Diane Abbott, Labour MP and first Black woman parliamentarian, had qualms to betray: “It’s all very well in the morning to say ‘Oh well, he got smashed’, but in the long run people who are attracted to the BNP will come away saying ‘he was a victim’.”

Could he have won sympathy instead? The BBC sent out a reporter to the London borough of Barking and Dagenham where the BNP has some support. As the BBC website reports it, all it took was a few questions on why one would back Griffin, for a White middle-aged man to explode—“I’m not racist, I’ve got loads of coloured friends, but when every second house is African, they’re moving in, got two cars, bought houses, what can you say? We got nothing.”

Such outbursts haven’t met with much alarm in the media, though. Writes Libby Purves, a radio presenter, journalist and author, in the Times, ‘The 22 per cent who told a post-programme survey that they would ‘seriously consider’ voting BNP have not actually done so. I doubt they will. I would estimate that at least half of them only said that in order to rile and goad a Government that has disappointed them so gravely, not least by its confused and inefficient failure to confront the practical effects of uncontrolled immigration… Those goaders won’t vote BNP: not after seeing its leader looking such a fool.’

Nevertheless, Griffin has complained that the BBC did not let him explain his party’s policies on major economic and social issues. Analysts interpret this to mean he would downplay the uglier parts of his agenda while tactically wooing voters via alternative appeals. In fact, since he became the BNP’s leader in 1999, he started moderating his stance—from the forced repatriation of immigrants to ‘voluntary repatriation’. So the game may well be to masquerade as a reasonable fellow. But other storm troopers of the far right don’t see it that way. They’re already screaming betrayal.