Conservatives and Liberal Democrats are to share power with David Cameron as PM and Nick Clegg as his deputy. This experiment could nudge electoral reforms along that democrats worldwide would be watching. 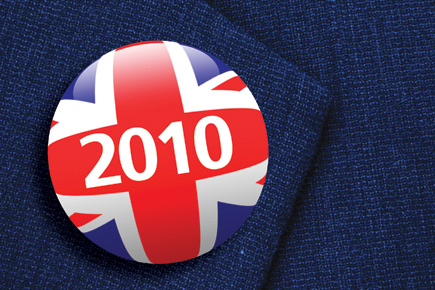 Conservatives and Liberal Democrats are to share power in an experiment that could nudge electoral reforms along.


The Big Ben struck 10 on the morning of 7 May, waking Britons to the foregone conclusion that they had not voted any single party to power in the general election the day before. The country’s politicians, equally bewildered as reality dawned on them, readied for a tryst with the ‘c’ word—coalition—they had been unfamiliar with since 1974.

The nation was in limbo, the markets on edge, the news channels in a frenzy as the final results poured in: 258 for Labour, 306 for Conservatives, 57 for Liberal Democrats, and 28 for the rest. No party gained 326 seats, required for a simple majority in the 650-member House of Commons.

Labour really lost it. With only 29 per cent of the popular vote, Gordon Brown scored the party’s second-worst result since 1918, just 0.7 per cent more than Michael Foot managed in 1983. Brown managed a lower share than that achieved by John Major in the Tories’ 1997 wipeout. Secondly, Labour is once more a largely northern, regional party. In southern England, excluding London, they now have only ten seats. Almost all the marginal seats won by Tony Blair in Kent, Essex, Hertfordshire and the London new towns have now turned Conservative.

Prime Minister Brown admitted he was “disappointed”, but in the same breath made clear he was not willing to let go of power. “It is my duty as Prime Minister to take all steps to ensure Britain has a strong, stable and principled government.”

On the night of 6 May, the Tories were confident that they would secure a majority. But the next day, when Tory leader David Cameron entered the party office in London, he looked dazed. A hush fell as he began to speak. “It looks like we haven’t quite made it,” he said. “There’s still a lot of work to do.”

Really flummoxed were the Liberal Democrats. The Lib Dem poll surge was, in the words of Boris Johnson, mayor of London, “a textbook case of the fickleness of the mob”. After Nick Clegg’s surge in popularity, the Lib Dems had hoped for sizable gains, perhaps seizing 70, maybe 80 seats. When Clegg arrived by train in London from his Sheffield Hallam constituency, he looked deflated. He admitted the obvious: “Last night was a disappointment… we have returned to parliament with fewer MPs than before.”

The British tradition about government formation in a hung Parliament is clear. The incumbent government remains in office unless and until the Prime Minister tenders his and the government’s resignation to the Monarch. An incumbent government is entitled to await the new Parliament’s first meeting to see if it can command the confidence of the house, or to resign if it becomes clear that it is unlikely to command that confidence. If a government is defeated on a confidence motion in the House of Commons, a prime minister is expected to resign immediately. A motion of confidence may be tabled by the opposition, or may simply be a measure which the government initiates as a test to demonstrate the House’s confidence in it. Votes on the Queen’s Speech have traditionally been regarded as motions of confidence.

But traditions were not the priority by the afternoon of 7 May. Signalling Labour’s intention to try cobble up a government, Brown said: “One thing that is absolutely clear is that the Conservatives have not done as well as they were predicting.” Cameron reacted sharply: “What is clear from the results is the country wants change. I believe it’s already clear that the Labour government has lost its mandate to run this country.” Nick Clegg threw in the punch line: “I have said that whichever party gets the most votes and the most seats has the first right to seek to govern, either on its own or by reaching out to other parties, and I stick to that view.”

News began to circulate that Cameron would make a statement in the early afternoon. Boris Johnson, Cameron’s classmate, weighed in, saying it would be “absolutely insane” if the Tories were not in government, having won most seats and votes. Inside 10 Downing Street, the PM’s residence, Brown and his inner circle watched Clegg’s statement and knew they had to react fast. Just after 1.30 pm, Brown emerged through the door of No 10 and strode to a lectern. Unfazed by a section of the crowd crying “leave now!”, Brown said he had a “constitutional duty to seek to resolve the situation for the good of the country”. He said he respected Clegg’s decision to talk to Cameron; they could take “as much time as they feel necessary”. Then he came to the crux. If Clegg would talk to Labour, he said, they could discuss “far-reaching political reforms including changes to the voting system… the electorate has sent us a very strong message that must be heard”. In effect, he promised immediate electoral reforms to bring in proportional representation in place of the current first-past-the-post system.

The message was clear to all: Prime Minister Brown was not quitting, yet.

At 2.30 pm, Cameron played his opening hand. “Britain needs a strong, stable, decisive government, and it is in the national interest that we get that on a secure basis,” he said at the St Stephen’s Club in Westminster. Then, he too turned to wooing Clegg. Tories and Lib Dems had much in common on education, the low-carbon economy, and tax reduction, he said. His offer to work with the Lib Dems was “big, open and comprehensive”.

The big and open question, however, concerned the voting reform so keenly desired by the Lib Dems, who tend to win far fewer seats than their proportion of votes, and so feared by the Tories. Cameron’s best public offer on this, though, was “an all-party committee of inquiry on political and electoral reform”.

On Friday afternoon, Clegg spoke to Cameron on the telephone, agreeing to explore how they could cooperate. That evening, two teams of negotiators sat down to discuss the outline of an agreement. Clegg’s instinct was to side with the Tories. But under the Lib Dem constitution, any ‘substantial proposal that could affect the party’s independence of political action’ has to be discussed with all the party’s MPs and its ‘federal executive’. Depending on how they react, any deal might also have to be put to an inner-party vote.

Even as talks continued, Clegg called on Brown, shocking the Cameron team. That raised hopes in the Brown camp. The weekend saw a bizarre sequence of events with both the Tories and Labour wooing the Lib Dems, no holds barred. It was crunch time.

By the evening of Monday, 10 May, things were formalised for a meeting between Labour and Lib Dem negotiators. Clegg hinted his talks with Cameron had yet to yield results and justified sitting face-to-face with Brown. As he flitted from one meeting to the next, Cameron too began to face an internal rebellion for failing to seal a deal.

Finally, Cameron acted, perhaps sensing power slipping away. He offered the Lib Dems cabinet seats and a referendum on the Alternative Vote electoral system. In this system, rather than marking an ‘X’ against the preferred candidate, each voter would rank candidates in an order of preference, putting ‘1’ next to the favourite, a ‘2’ by the second choice, and so on. If a candidate receives a majority of first place votes, he or she would be elected just as under the present system. However, if no single candidate gets more than 50 per cent of the vote, the second choices for the candidate at the bottom are redistributed. The process is repeated until one candidate gets an absolute majority. Shadow Chancellor George Osborne said it was the “final offer”.

As the evening wore on into night on Monday, Brown acted. With wife Sarah and cabinet members in tow, he dramatically announced he was quitting as party leader, hoping to pave the way for a Labour-Lib Dem pact. “I have no desire to stay in my position longer than is needed,” he said, accepting Labour’s failure to get a majority in the polls as a “judgment on me”.

The arrow struck home. Nick Clegg was the first to congratulate Brown: “Gordon Brown has taken a difficult personal decision in the national interest.” Back in 1974, the last time the country had a hung Parliament, the then Labour Prime Minister Edward Heath had refused to resign, instead trying in vain for four days to sign a pact with the Liberals. Ultimately he quit, facing political oblivion. Brown has followed a similar path this time round, but will he end his political career equally dubiously?

As for Cameron, he has led his party to the brink of power, but has been deprived of the mandate many believed was well within his grasp. Had 20 more seats fallen to the Tory advance, he would have escaped the unenviable task of trying to negotiate his way into 10 Downing Street. Tragically for him, he was deprived of a Commons majority by failing to secure the votes of just 16,000 people, according to an expert analysis. ‘Cameron came so near and yet so far,’ write the directors of the Elections Centre at Plymouth University, ‘Just 16,000 extra votes for the Tories, distributed in the 19 constituencies in which the party came closest to winning, would have spared us a weekend of negotiation and speculation.’ The smallest Labour majority, just 42 votes, was secured by Glenda Jackson, a former actress, in the Hampstead and Kilburn constituency in north London.

Benjamin Disraeli, the darling of the Conservatives in the Victorian era and a master of coalitions, said of coalitions that despite their success “their triumph has been brief”.

A century-and-a-half later, David Cameron, the Conservative with a royal lineage—he is a distant cousin of Queen Elizabeth II—wants to prove his peer wrong.