Mahua, a humble tipple of the adivasis, finds its space under the liquor marketing sun 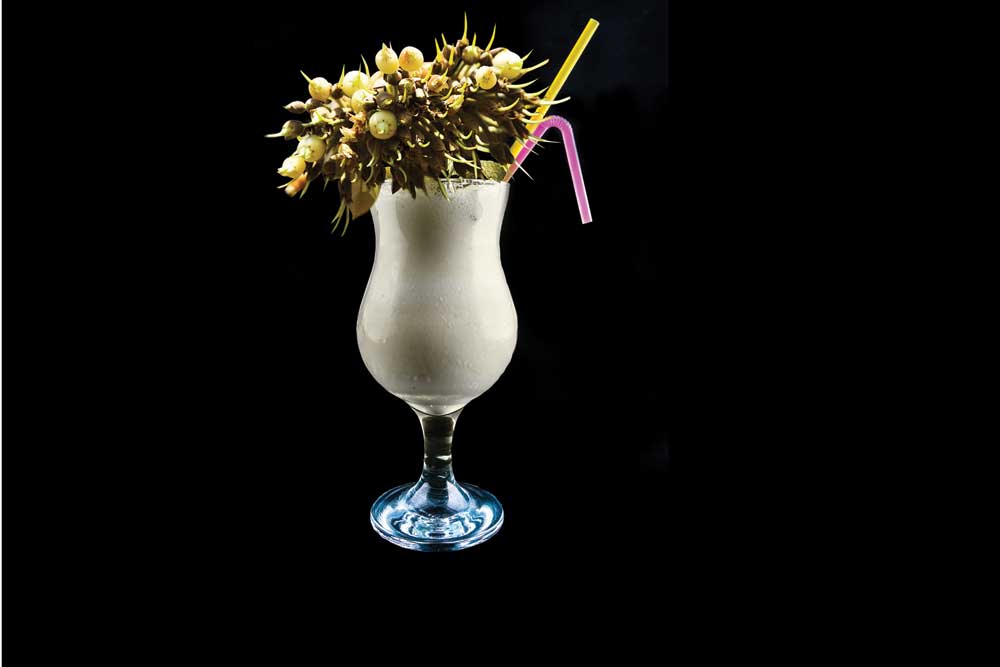 FOR OVER A YEAR, Susan Dias would frequently travel to the Chota Nagpur Plateau, a region covering the central eastern states of Jharkhand, Bihar and Chhattishgarh, accosting tribals in villages there with an unusual question.

“Do you have mahua here?” she would ask, referring to the alcohol brewed in these parts.

And almost immediately they would clam up. “I would have to explain that I meant no harm. That I was not from the government. But it was no use. They would say, ‘Madam, we don’t even eat meat here.’”

The trick, she soon learnt, was to catch hold of someone familiar—the best candidate was the local school teacher—who would guide her to the local speakeasies. And then suddenly those very people would re-emerge with bottles of mahua.

Dias, a Mumbai-based chartered accountant, had a deep interest in spirits and the brewing and distilling processes of alcohol. She had come to these parts drawn by the stories of the central role the alcohol and its source, the mahua tree, played within tribal societies. What particularly fascinated her was that unlike most other spirits in the world, which are made by either distilling grains or fruits or vegetables, the mahua drink’s chief ingredient was a flower. “That’s exceptionally unique. No other spirit in the world comes from a flower,” she says.

So what was her taste of the swill like?

“It was horrible,” she says. “But I could tell that made in the right way, it had a lot of potential.”

Dias quit her job as a tax consultant and, along with a friend, launched Native Brews. Her aim is to bring out a range of traditional Indian spirits for the premium mainstream market. “People always say, ‘Oh but this is country liquor.’ Every alcohol in the world started as ‘country liquor’. It’s only over time, as production and quality improves, that it becomes a more global drink,” she says. She wants to do something similar with traditional Indian spirits like the mahua, which are made and consumed only within certain communities and regions, and push them to compete with premium drinks in cities.

Almost four years after starting Native Brews, she is now close to coming out with her first set, the mahua, and hopes to have the drink out by year-end. “It’s been very crazy (the last few years), trying to work out the laws, getting the process and method right. There was nothing by way of research when I first started. So it was really like feeling about in the darkness,” she says. “Now it’s finally close to completion.”

Native Brews is not the only one. The mahua drink is now being increasingly pushed by private and government bodies into the mainstream Indian premium alcohol market.

The mahua tree grows across a vast swathe of land, from West Bengal in the east to Gujarat in the west, and Uttar Pradesh and Andhra Pradesh in the north and south, respectively. But it is most predominantly concentrated in the central forests of Madhya Pradesh, Jharkhand, Bihar, Chhattisgarh and Odisha. To the tribal communities here—as SS Maiti, deputy general manager at the Tribal Cooperative Marketing Development Federation of India (TRIFED), a Government body under the tribal ministry points out—the mahua tree carries an important cultural and economic significance.

Its fruits and flowers are consumed. The seeds are used to extract oil. The leaves serve as plates and bowls. And everything, from the bark of the tree to the flowers become medicines in the hands of traditional healers. But the primary use, especially from its flowers, remains alcohol.

In the nights from February-end to May, the mahua flowers bloom. By dawn, a rich carpet of cream flowers will have formed on the forest floor. The villagers and forest dwellers—this is the lean season since there is no work on either the Rabi or Kharif crops—move through the forest in the early cool light of dawn, picking up these flowers. They are dried under the sun, some set aside for the house itself, some sold to the forest department or government tribal development bodies.

“Mahua can be our national spirit. It is such a unique spirit, because it is the only one in the world distilled from flowers” – Desmond Nazareth, founder, Agave India

According to Satya Narayan Naik, a professor at the Centre for Rural Development and Technology at IIT-Delhi, India produces more than 10 million tonnes of mahua flowers every year, at least 90 per cent of which is used to make alcohol. Mahua flowers are one of the most important non-timber forest products and play a major role in tribal economy, he says, but not enough processing technologies have been developed to tap into its potential.

Naik has been studying mahua and its products for several years. He traces this fascination to his childhood in Odisha, where he often encountered people consuming a drink they told him was made from flowers. He has developed several products like jams, jellies, sauces and concentrated syrups for beverages from mahua. He has also developed a honey-like sweetener, for which a patent has been filed, that can be used in a variety of things from candies to biscuits and cakes.

“The mahua flower and its products are quite wonderful. You can make many things from it. At present the only industrial utilisation of these flowers is in the production of liquor. And even this is quite profitable. But the middlemen involved means that most of the tribals who pick the flowers actually make very little money,” he says. “We have to find a way of cutting out the middlemen, and create products that can go directly to the consumer.”

Enter TRIFED. For over a decade, it has been considering developing products from tribal staples, including a mahua drink with low alcohol content, to cater to consumers in cities. They developed a candy made from tamarind and mahua which has been supplied along with meals on Air India flights on a trial basis. Naik, who is part of a team from IIT developing these products for TRIFED, says, “These products are quite good. Air India is willing to use the tamarind-mahua candy, but we need to produce them on a large scale.”

Products like jams and candies may not immediately become very successful since there are several established brands in these categories. A mahua drink, however, if done well, can be very successful, since such a drink would be very unique.

“India produces more than 10 million tonnes of Mahua flowers every year. At least 90 per cent of it is used to make alcohol” – SN Naik, professor, Centre for Rural Development and Technology, IIT-Delhi

But such a flavoursome low-alcohol content mahua drink has been elusive. A tie-up between TRIFED and another research institute earlier didn’t go too well. “The results weren’t quite good flavour- wise,” Maiti explains. But Naik and his team have apparently been more successful. They have developed a mahua drink which will come in additional flavours like ginger and carom seeds (ajwain) and pomegranates. The drink itself, Naik says, will be mildly alcoholic, around 4 to 5 per cent. “People will be able to internalise with the drink, but not get too excited in the process,” Maiti says and laughs.

The drink is likely to take some time before hitting shelves. For mass production, TRIFED officials say, the body will need to tie up with private entrepreneurs.

“MAHUA CAN BE our national spirit,” says Desmond Nazareth. “It is unique to this part of the world. The Mahua tree grows in thirteen or so states across India, and there are regional varietals, each with subtle differences… Mahua spirit has deep roots in the tribal culture and folklore. And it is such a unique spirit, because it is the only one in the world distilled from flowers.”

Nazareth, a software professional, returned to India from the US about 18 years ago. A cocktail enthusiast, who would often find himself in charge of the bar at parties, he realised how difficult it was to find a tequila in the Indian market then. Looking up the agave plant, the source of tequila, he realised he had seen similar looking plants during his childhood. Although most of these plants were not good for making agave spirit, he identified a blue-green variety growing around the Deccan Plateau region that was ideal to make tequila-like agave spirits. What followed was years of work, the acquiring of permissions, the setting up of a craft distillery in Andhra Pradesh’s Chittoor district, before the launch of his first agave-based spirit, under the brand name DesmondJi, in 2011. Nazareth has since come up with a range of other products, from agave and sugarcane-based products to orange liqueurs, all of them sourced from Indian ingredients.

From the very beginning, when he was making the rounds of bureaucratic offices acquiring permissions, he says, he had been keen to make a mahua spirit. “I had an entire laundry list of India-specific products (I wanted to make), from coconut and cashew-based to mahua,” he says. “But I had to drop mahua from that initial list because I realised I could get stuck (trying to acquire permissions).”

The difficulty is that mahua has been categorised in most states as country liquor. There are widely three categories of alcohol in India—country, imported and Indian made liquor (IML)/Indian made foreign liquor (IMFL)—each one with its own set of rules and taxation brackets. This categorisation, it is believed, came during the British Raj, where traditional home-made drinks were marginalised. Mahua flower collection was even banned at one point, since they did not generate revenue from taxes.

Legally, mahua drink is still looked at with suspicion. In Maharashtra, there has been a ban of trading in mahua flowers; it is under prohibition in Bihar; there’ve been demands of a mahua drink ban in Jharkhand; and such drinks are not allowed in parts of Chhattisgarh, although the law permits adivasis in many of these areas to make and store not more than 5 litres.

The categorisation of drinks continues now, Dias explains, as a marker of quality. “However well I make a mahua drink, however great its quality, it will still be branded as country liquor,” she says. “I can’t move it within states, and will only be able to sell it in tharra (country liquor) shops.”

In 2013, Nazareth began working on his version of the mahua spirit. The earliest experimental versions weren’t very good because the flowers hadn’t been handled well. He then began to oversee the whole process more closely, from the collection and sun-drying of the flowers to producing the drink itself. He simultaneously began to push for his mahua drink to be re-categorised from the country liquor tag. After several years, he finally managed to convince the government of Andhra Pradesh, where he has his distillery, to let him make mahua as an IMFL, and Goa to categorise mahua as an IMFL for packaging and sale. A few months ago, Nazareth launched two mahua products—one, a straightforward spirit, and the other a honey and spice liqueur. For now, sale in India is limited to Goa, where, he says, they have been doing very well. “Bartenders love experimenting with my products, because they are starting from a clean slate as nobody has used international quality mahua for cocktails before this, and mahua is superbly suited to making cocktails,” he says.

Dias’ mahua drink will also be meant for Goa and foreign markets. Over time, she believes, more states will allow it. “There is a precedent with Goa now,” she says.

Nazareth is working on a few more mahua- based products. There is going to be a sparkling drink. But the most interesting is a brandy-like after-meal drink. “When people taste it, they ask me, ‘Is this brandy, Desmond? And I say, ‘No, not quite.’”