The Politics of Healing 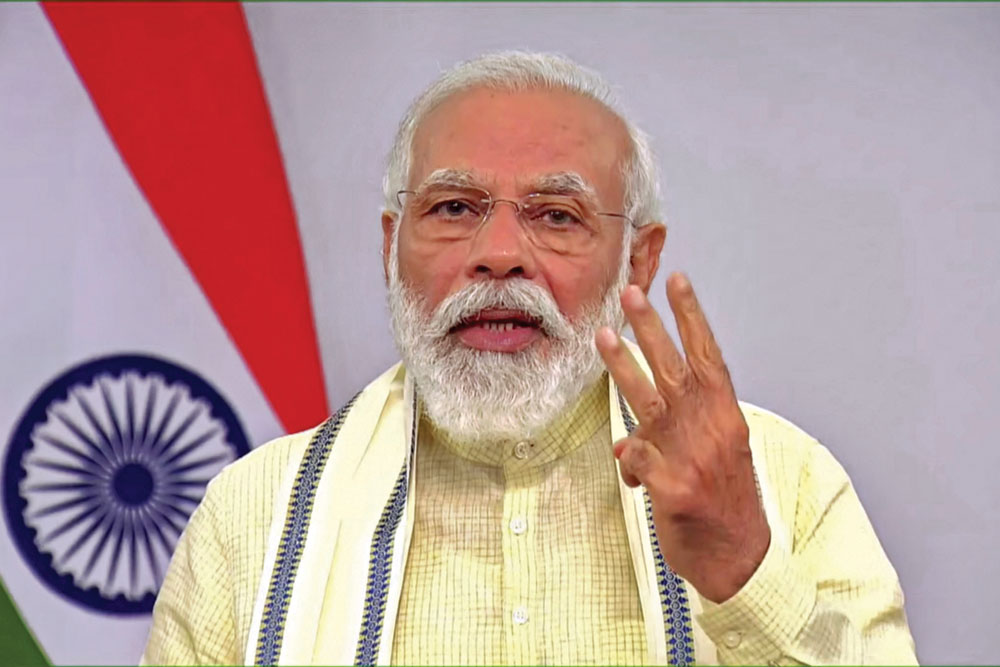 IN A SHORT address to the nation on June 30th, Prime Minister Narendra Modi extended free distribution of foodgrain to poor citizens for another five months. Usually, such steps are welfarist in nature but this time, a forward-looking economic policy came bundled in the Prime Minister’s package. This step will not only alleviate distress among poor citizens but will also help agriculture and industry in the crucial period as India unlocks and restarts its economic engines.

The rollout has the makings of a gigantic distribution effort. Modi said that 80 crore people will benefit from the scheme—the Prime Minister Garib Kalyan Yojana (PMGKY)—and will be given five kilograms of rice or wheat, depending on their preferences, until November. In addition, every family will be given one kilogram of chickpeas for five months. In all, 20 million tonnes of foodgrain will be distributed during these months.

Distributing foodgrain at this time makes immense sense for the Government from a welfare-cum-political perspective. More importantly, there is plenty of economic sense in taking the step. At the moment, the Food Corporation of India’s (FCI) granaries are overflowing. In June, the FCI had a hoard of 83.2 million tonnes of wheat and rice, up from 64.2 million tonnes in May, and even further from approximately 57 million tonnes in April. Given some monthly fluctuations, this pile has only grown higher since January. With the kharif crop on the way, unless this figure is managed, these stocks will become almost unmanageable. This year, with a very good monsoon, there will be a bumper rice crop.

Some of these potential problems can be gleaned from the math involved in managing the gigantic hoard. If it were a simple matter of the Government buying and selling wheat and rice on the spot, life would be much simpler. It is not. The Government buys when the cropping seasons end and has to maintain a minimum stock that ranges from 21 to 41 million tonnes at different times in any given year. Usually, it stocks up far beyond those norms: not buying whatever farmers offer, especially wheat and rice, breeds political discontent. But piling up imposes huge costs: there are costs associated with storage—interest payments keep going up even as the quality of wheat and rice continues to decline if these are stored beyond a point.

In that sense, the pandemic has provided an opportunity to the Government to not only help the poor but also help itself financially and administratively. In his speech, Modi hinted that the total cost of the food programme since April, when the free distribution began, will add up to a tidy figure of nearly Rs 1.5 lakh crore. Usually, the costs of distributing wheat and rice are shared between the Union and state governments according to set formulae evolved under the National Food Security Act, 2013. But this is an extraordinary time when state finances are stressed. As a result, the Union Government is bearing all the costs, including that of distributing these grains to migrants who have been on the move. This alone is approximately Rs 3,109 crore. This is over and above the cost of distributing wheat and rice from fair price shops (ration shops) in states and Union territories, which is again being borne by the Centre.


A far more important economic effect was hinted at by Modi when he said: “We have seen a dream for the whole country and some states have really done well. We are requesting other states also to take it forward. And, what is that? Now, One Nation, One Ration Card is also being implemented. Major beneficiaries of this will be those who go to other states in search of employment.”

Since March, a reverse migration of labourers from urban areas back to their homes in states like Bihar and Uttar Pradesh has been on in a haphazard fashion. In the first fortnight of May alone, the Indian Railways ran 1,600 ‘shramik special’ trains from various points in India ferrying more than 2.1 million labourers. By the first week of June, the number of these trains had gone up to 4,197 and the number of travellers had swelled to 5.8 million people. All went largely to eastern India. There are no accurate figures for how many workers reside in states other than their home state. In 2016, the Economic Survey estimated the size of the migrant workforce at 100 million. There are other estimates that peg inter-state labourers at anywhere from 12 to 18 million persons. Going by the latter figure, the migration in the wake of the coronavirus pandemic has been huge by any standard.

This is especially troubling as India finally unlocks and starts economic activities again. The shortage of labour in the industrial zones of Gujarat, Maharashtra, Karnataka and Tamil Nadu is likely to be severe. Without a workforce, industry cannot restart and the workers who have already moved (around 5.8 million) will take some time to return. It is unlikely that this will happen before the end of the monsoon season this year as many of these labourers will now double up as farm labourers in their home states. The steady rise in demand for work under the Mahatma Gandhi National Rural Employment Guarantee Scheme (MGNREGS) hints at this possibility.

Distributing foodgrain at this time makes sense for the Government from a welfare-cum-political perspective. There is plenty of economic sense in taking the step

What is important now, from an industry perspective, is to ensure that migrant labourers who remain in urban areas don’t feel the pressure to move back. That can be done only by providing them incentives to stay back. Work was one big incentive, one that disappeared during the lockdown. But some amount of food security, as is being done under the PMGKY, can go a long way in keeping them back. There has been plenty of hand-wringing about the Government not doing anything to help industry tide over a difficult time. Ensuring that labour is available at hand when work reopens is one big step in extending a helping hand. It helps both industry and the workers who have lost so much in this crisis.

The third advance estimates for the output of rice this year, released in mid-May, peg the crop at nearly 102 million tonnes. Usually governments—both Union and states—pick up anywhere up to a third of what farmers bring to the market. Every year, these purchases are roughly matched by the amounts released by the FCI for various uses—for example, under the National Food Security Act. But very often, the outgo is less than the fresh stocks that are brought in for storage across the country. This year, with warehouses already near breaking point with stored grains, the distribution under PMGKY promises to free up vital space for storage.

This can only help the rural economy. If, at some point, the Government decides to step up purchases beyond what it does normally, that will need storage. Usually, in the absence of proper storage space, wheat and rice end up being stored in open spaces. Rain and pests usually make short work of the produce. Economists have always spoken in favour of releasing more stocks for the poor as a remedy. This time, the Government has done that. It is interesting to note that this prescription is almost always made by economists of a leftist persuasion.

Grain purchases by the Government are a vital source for injecting money into the rural economy. During crop purchase seasons in April (for wheat) and September (for rice), thousands of crores of rupees is disbursed to farmers for what they sell in markets. In a depressed economy, this is a very important raincheck.

There are incipient signs of a rural economic pickup. Data released by the Centre for Monitoring Indian Economy shows that in the week that ended June 21st, the rural unemployment rate fell to 7.26 per cent from 10.96 per cent in the previous week. The job loss rate has been the slowest in the last three months. Much of this is welcome news as the huge reverse migration had raised fears of massive worklessness in rural areas. A strong monsoon and a bumper crop have actually raised the demand for work. When supplemented with MGNREGS jobs, which have also seen a spike, this bodes well for economic revival. There are other data points as well: early trends suggest that tractor sales—an important indicator of the rural economy’s health—have picked up in June. Even when the dismal data for the fourth quarter of 2020 was released, agriculture was one bright spot.

These are early days and the economic prognosis for 2020 remains grim. But the green shoots being seen in the rural economy, the weakest link in the Indian economy, promises to raise the demand for industrial output like chemicals and fertilisers over the next six to eight months. In recent years, there has been plenty of talk about the ‘decoupling’ between the rural and urban economies in India. This year is giving India a dose of realism: the rural sector remains a very important cog in the economic wheel.

There has been plenty of hand-wringing about the Government not doing anything to help industry. Ensuring that labour is available at hand when work reopens is a big step. It helps both industry and the workers

The Government probably realises this. Since March, when the first help programmes were launched, a disproportionate share of the money disbursed has gone to rural areas, be it to the returning migrants or on account of direct and indirect help to farmers. This needs to be pushed up. There are ways in which this can be done. For one, foodgrain purchases can be stepped up beyond the usual one-third of what farmers bring. For another, the minimum support price for different crops can be raised as a one-off measure. This may seem like a huge increase in Government expenditure especially when public finances are strained. But this can pay off in short time.

Ample availability of food for urban areas is essential to keep workers there. It will also help keep food inflation in check, a step that can go some distance in preventing generalised inflation—which usually climbs up through food and fuel prices—and ultimately help the central bank keep interest rates sufficiently low. In recent analyses, economists have hinted at inflationary pressures picking up in the second half of the year due to broken supply links, especially for food and consumer items.

To that extent, the Union Government has done well to release more food. Stored food has its own costs and giving it away for free is not costless as many activists and academics assume. But there is no better opportunity than a global pandemic and the worst crisis the Indian economy has faced in a very long time to be generous with dishing out government stocks of food. If anything, greater generosity will help India more in this crisis. 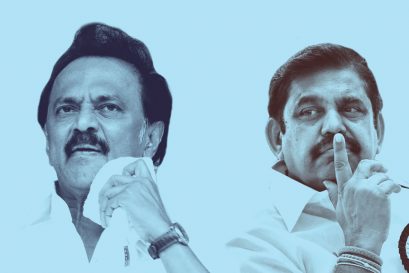 A Stage for Two Only 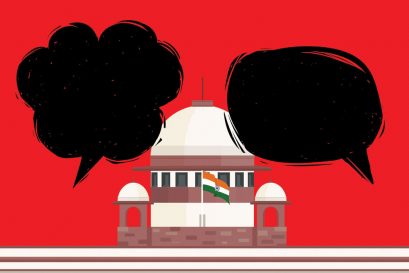 The Court in the Middle

After the court passed an interim order on a clutch of petitions related to three farm reform laws passed by Parliament, it found itself in the midst of a firestorm 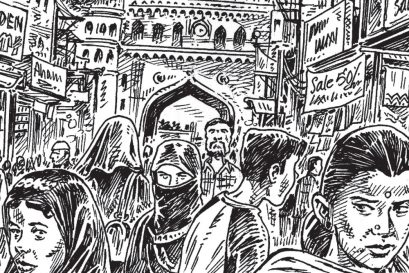