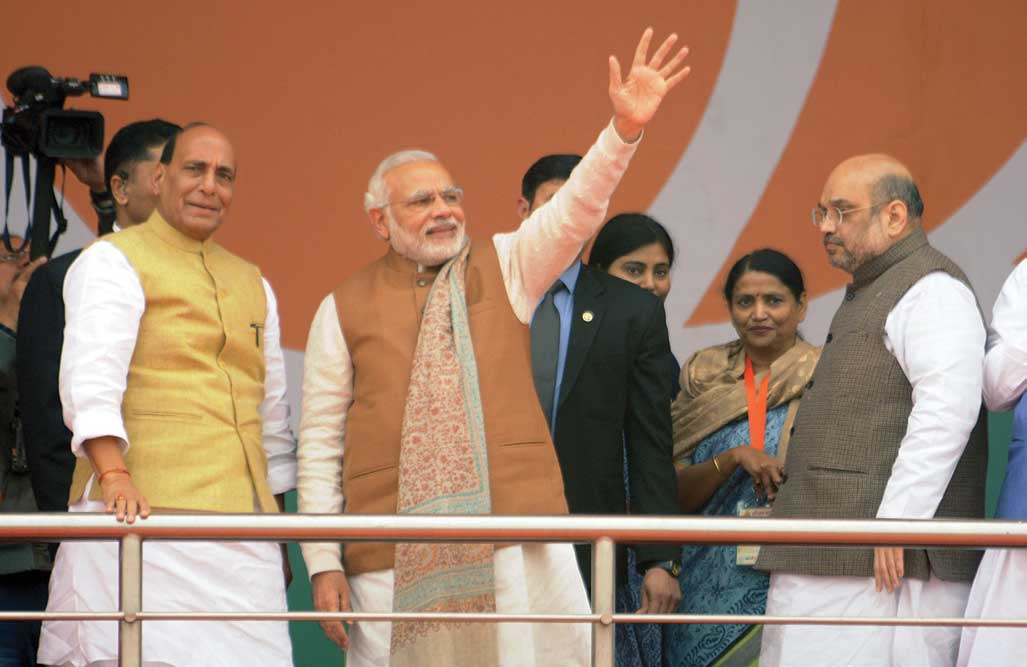 THE ELECTORAL EXERCISE starting February 4th and ending March 8th, spread across 690 constituencies in five states, including India’s most populous, Uttar Pradesh, will be the biggest since the 2014 General Election that saw Narendra Modi cruise to an emphatic win with an absolute majority for the BJP, the first time for any party since 1984. The elections to the 403-member Uttar Pradesh Assembly, which will be held in seven phases starting February 11th, is expected to be a crucial litmus test for Modi, who embarked on a massive demonetisation exercise on November 8th. While the Prime Minister tirelessly touted his clampdown as an effective step to fight black money, tax evasion, counterfeiting and other social ills, millions of people were inconvenienced by serpentine queues to withdraw money from ATMs and banks, not to speak of problems caused by falling demand for goods and services. Ironically, opposition parties failed to tap the sentiment against the sweeping cash policy shift among a large section of people, and the resultant chaos didn’t result in mass protests or violence despite the brunt of Modi’s ‘surgical strike’ being borne by the informal sector, which employs close to 90 per cent of the national workforce. The overarching message of Modi’s post-demonetisation campaign, which saw him endlessly invoke patriotism, was that economic pain had to be endured in order to unearth illicit wealth. The outcomes of the polls to the five states of Uttar Pradesh, Punjab, Uttarakhand, Goa and Manipur would therefore confirm whether people have bought his slogan of patriotic sacrifice.

For Modi, a BJP victory in the three-cornered contest in the politically volatile and electorally significant state of Uttar Pradesh will not only be an endorsement of his high-stakes political gamble, but will also ensure that his party has enough numbers to have its nominees—perhaps of the Sangh Pariwar—as the President and Vice-President of India, two coveted positions that will fall vacant in the middle of this year. Though the BJP has had its nominees in such crucial posts in the past, while AB Vajpayee was Prime Minister, they were mostly ‘compromise candidates’ like APJ Abdul Kalam and others. Having more state legislators elected in the upcoming polls will give the party the required edge in the electoral college that elects the President and Vice-President. Currently, the BJP, either on its own or with allies, rules 14 of 29 states, and the party, under its President Amit Shah, is determined to rapidly spread its wings wider.

In UP, which is home to close to one- sixth of the country’s population, the BJP hopes that its organisational prowess and the backing of its parent body, the Rashtriya Swayamsevak Sangh (RSS) that ensured a dramatic win in the 2014 polls, will help it post a comfortable win this time round too, as the nation heads to the ballot in a blur of instinctual energy. The internecine wranglings within the SP are being counted as a blessing for the BJP. The ruling coalition leader at the Centre also expects its February 1st Union Budget to have a positive effect. Notwithstanding all this, it might still face a tough challenge from the Mayawati-led BSP, which would likely pull in Muslim votes if the SP’s prospects fade. With the backing of Dalits, her core constituency, and that of Muslims, who typically vote tactically against the BJP, she is expected to put up a strong fight. A Congress campaign has not made any impact so far. Strangely, Rahul Gandhi, its spearhead, was missing in action on the day the Election Commission announced polling dates. He had left India for a holiday a week earlier and is politically active only through occasional tweets.

The other election-bound states, Goa and Punjab, will go to the polls on February 4th, Uttarakhand on February 15th, and Manipur in two phases on March 4th and 8th. In Punjab, the ruling Shiromani Akali Dal (SAD) faces anti-incumbency headwinds after being in power for two straight terms. This is an outcome of various factors, including Chandigarh’s mismanagement of the agrarian crisis (cotton crop disaster of 2016), nepotism and the deeply entrenched perception of the SAD regime being grossly corrupt. The Aam Aadmi Party (AAP), which had built on its good show in the 2014 General Election and charmed voters with its anti-graft rhetoric, has, over time, squandered its advantage thanks to its Delhi-centric functioning. In addition, it has dithered on the live-wire issue of the Satluj-Yamuna Link (SYL) canal and the sharing of Ravi-Beas waters with neighbouring states. Punjab wanted to wriggle out of a commitment to construct the canal. The opposition party that has stolen a march over AAP in tapping the resentment typical of upper riparian states is the Congress, led by Captain Amarinder Singh, who led legislators to resign en masse from the state Assembly after the Supreme Court struck down a 2004 law that would help Punjab extricate itself from any such liabilities.

The style of functioning of Delhi CM Arvind Kejriwal, who hails from Haryana, a lower riparian state, did not go down well with his own cadres. His political ambitions—to project himself initially as AAP’s chief ministerial candidate for Punjab—also proved to be a dampener. Meanwhile, the Congress in the state is being extremely careful with ticket distribution so as not to attract criticism for favouring powerful political families, and also to stem any internal rebellion that could prove costly.

In Uttarakhand, the electoral race is expected to be a neck-and-neck one, with both the ruling Congress and the main opposition BJP worried more about trouble within than outside. Though the creation of the state less than 17 years ago was preceded by a strong grassroots movement, fissures between regions and caste groups continue to deepen. Elections in the state follow a year that saw months of intense political drama. It started with a rebellion within the Congress ranks against CM Harish Rawat, who had come to power with 36 seats in the 70-member assembly. A two-month phase of President’s Rule in 2016 was followed by Rawat’s reinstatement by the Judiciary after he garnered the requisite numbers in his support.

In Goa, where the ruling BJP is hoping to make a comeback, all is not well within the ruling coalition, and rumblings abound. The Congress, for its part, is seeking to make gains in the state where a couple of regional parties enjoy a degree of clout, especially in some pockets. This time, AAP too has entered the electoral arena, pitching former bureaucrat Elvis Gomes as its chief ministerial candidate.

In Manipur, where the BJP had expected to make major gains, one of the highlights this time is that Irom Sharmila is in the fray with her Peoples’ Resurgence and Justice Alliance, which she launched after she ended an epic16-year fast to demand the repeal of the Armed Forces Special Powers Act (AFSPA). Her presence could upset the political calculations of other contenders, including the BJP, which is trying to woo various ethnic groups, including Meiteis among whom Sharmila has tremendous appeal.

As a whole, the state elections of 2017 have been billed as the precursor, or the semi-final match, to the General Election of 2019. It promises be a cliffhanger.