The Battle for Karnataka 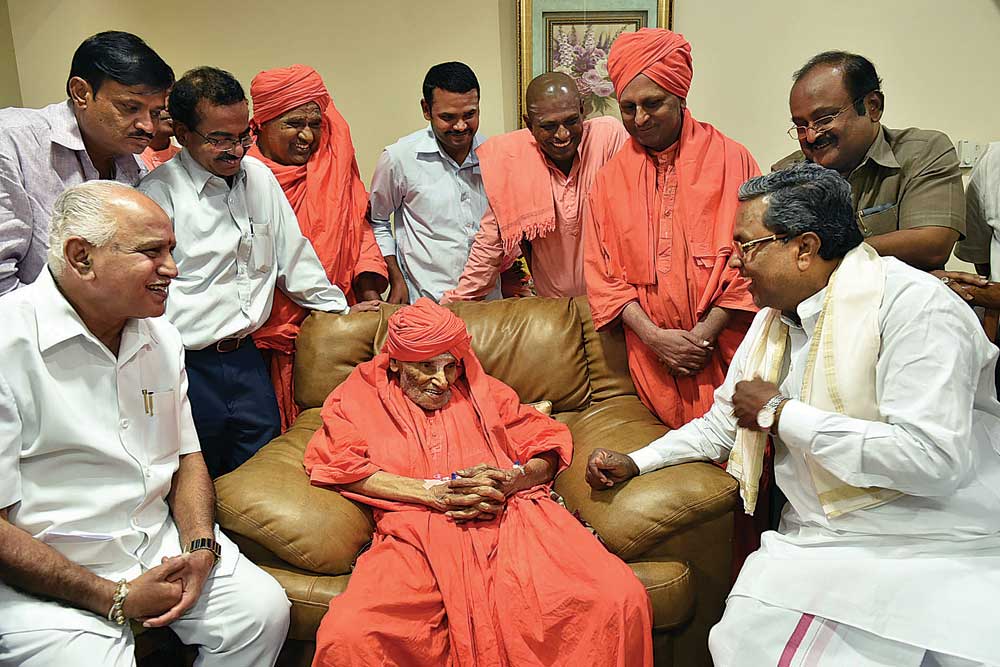 ON THE DAY that Congress Vice-President Rahul Gandhi and other party leaders stood around a table at Indira Canteen in South Bengaluru’s Jayanagar and relished vaangi baat, a Kannada delicacy of rice and brinjal, Karnataka Chief Minister Siddaramaiah decided to take a dig at Prime Minister Narendra Modi’s radio programme Mann ki Baat. In front of a large poster of former Prime Minister Indira Gandhi smiling down at the gathering, Siddaramaiah quipped that Modi was “talking of his mann ki baat” while the Congress was “giving vaangi baat to the poor”.

For the Chief Minister, rice evokes not just memories of his modest past in Siddamaranahundi, near Mysore, but perhaps also hopes of another term in power in Bengaluru. Time and again, he has recalled his childhood in a ‘kuruba’ (shepherd) family and how the poor went begging for rice whenever a child was unwell in the village. Projecting himself as the messiah of the poor, his speeches revolve around the welfare of society’s most deprived, apart from icons of social justice like BR Ambedkar and the 12th century reformer Basavanna. He has announced that all government offices in Karnataka shall have a portrait of Basavanna, patron seer of the state’s Lingayats. Siddaramaiah needs all the help he can get as he takes on the BJP on its own turf: the Lingayat support base of the latter’s former Chief Minister BS Yeddyurappa.

The BJP has started feeling the heat of Siddaramaiah’s political moves. Striving to recapture Karnataka, the only southern state the saffron party has ever ruled, the BJP was treading cautiously. In August, it was in the midst of a debate—sparked off by the Congress— over separate religious status for Lingayats when party chief Amit Shah landed in Karnataka to keep the party united. Shah maintained a stoic silence on the sensitive Lingayat issue, seeing it as a political gimmick with an eye on 2018 when the 224-strong state Assembly goes to the polls. Taking a position would prove perilous, he probably reckoned. To observers, however, it’s clear that the Congress outreach to Lingayats has given the BJP some sleepless nights.

Yet, Siddaramaiah’s gamble may be riskier than it seems at first glance. In what is seen as a setback to his strategy to attract a section of Lingayats away from his political rival Yeddyurappa, the 110-year-old pontiff of the Siddaganga math in Tumkur, Shivakumara Swami has broken his silence to refute state minister MB Patil’s claim that he backed a division of the community. Since the mid-September pronouncement, there has been silence in Karnataka’s political battlefield on the issue of a separate religious identity for Lingayats. The BJP has heaved a palpable sigh of relief, and has lost no time in concluding that Siddaramaiah’s ploy has boomeranged. “Dividing Lingayats is not working. Even the Lingayat math seers have not accepted it,” as BJP General Secretary Muralidhar Rao, who is in charge of the state, has put it.

Lingayats, who form 17 per cent of the state’s population, are followers of Basavanna, a rebel against inequalities in Hindu society who initiated Veerashaivism, an order of Shaivism that accepts Vedic texts but rejects some Hindu traditions. Siddaramaiah has claimed that the demand for it being considered a distinct faith came from some Lingayat ministers. Both the BJP and Congress are saying that the issue will not play a role in the forthcoming elections. Yet, the controversy has shown that whether it’s about blurring the lines between social justice and social engineering, about populist schemes rolled out for the poor, or invoking various aspects of Kannada identity, it is Siddaramaiah who is setting the electoral agenda. Another of the Chief Minister’s initiatives has been a flag for the state.

The latest scheme in the state to add flavour to Congress populism is the party’s Indira canteens, selling breakfast for Rs 5 and meals for Rs 10

“It’s early times, but what’s happening in Karnataka is interesting. While the Congress, like it did in Punjab, is empowering its state leaders, the BJP [has been] following the Congress of the 1970s, when the Central leadership of the party micro-managed affairs [in the states],” says Sandeep Shastri, a political analyst and researcher. “The Congress under Siddaramaiah is trying to assert itself,” he adds, “He has caused discomfort to the BJP, which had always taken comfort in setting the agenda. The BJP also cannot lampoon the Congress on corruption in the state.”

Shastri, however, also says it’s still unclear how much space the Congress High Command—from which hints of reproach have been detected—would give the Chief Minister to run his party campaign the way he wants. Only a decade-old in the Congress, he is still seen as something of a newcomer. He was earlier with the Janata Dal-Secular (JD-S), where his politics revolved around anti-Congressism, though few deny he has come a long way since. “He is giving a tough challenge to the BJP. He is implementing Congress policy, balancing social welfare schemes with secularism,” says KC Venugopal, the Congress leader in charge of Karnataka. Having been with Siddaramaiah at four or five of his election rallies, he says he has seen the Chief Minister’s mass appeal, especially among the poor. “He is trying to bring backward communities, Scheduled Castes and Scheduled Tribes into the mainstream” says Venugopal, “He has the political will.”

The BJP is watching Siddaramaiah closely for his next move. When Shah visited Bengaluru, he sent his party a stern message that squabbling and ‘anti-party activities’ would not be tolerated. The BJP chief’s visit has boosted the morale of party leaders in the state, so much so that many proclaim that the electoral tide has turned in its favour. He took to task many of the local leaders, including those of the Yuva Morcha, prodding them to play a more aggressive role. Within days, this youth wing announced a ‘Mangaluru Chalo’ rally to protest against the killing of 12 members of the Sangh Parivar. It was denied permission by the state government, a denial taken by BJP leaders as a sign of the Chief Minister’s insecurity about retaining power.

Charges are being levied too. “The Congress is using the state intelligence department and anti-corruption bureau to file old cases against BJP leaders,” alleges Pratap Simha, the BJP MP from Mysore who heads the state’s Yuva Morcha. Simha has also attacked Siddaramaiah for his criticism of the princely state’s former royals. “His remarks have made him unpopular in Mysore,” he says.

The BJP also hopes for a repeat of the voting patterns of the 2014 General Election, when Karnataka had joined the Modi wave sweeping other parts of India. Since then, India’s ruling party has been on the ascent, with win after win lending credence to its call for a ‘Congress mukt’ (free) country. For the Congress, victory in Karnataka is crucial just to silence widespread talk of its mortality under a BJP onslaught.

Siddaramaiah is going all out for the cause. He has positioned himself as an ‘Ahinda’ leader, an acronym for Alpasankhyataru (minorities), Hindulidavaru (backwards) and Mattu Dalitaru (Dalits). He expects a caste and socio-economic status count which he commissioned in 2015 to work in his favour. While Vokkaligas in south Karnataka and Lingayats in its northern districts are seen as dominant castes, they together form less than a third of the state’s population. The headcount would reveal the actual number of Dalits and backward classes, information that the BJP suspects is being withheld so that the Chief Minister— of a backward group, Kuruba, himself—can calibrate his political strategy for the elections accordingly.

The BJP acknowledges that the Congress gambit over Lingayats caught it unawares. With the All India Veerashaiva Mahasabha opposing the proposal, which was seen as a constitutional violation to begin with, the BJP adopted a wait-and-watch stance at first. Then it took another approach to nip the Congress bid for Lingayat votes in the bud. To assert himself as their top leader, Yeddyurappa has announced that he would contest the polls from North Karnataka, a community stronghold, giving up his constituency of Shimoga in a central part of the state. The move is being hailed as a masterstroke.

On his part, the 69-year-old Siddaramaiah, untainted and undeterred, is hoping to break a three-decade-long jinx. Since Ramakrishna Hegde in 1985, no Chief Minister has returned to power in the state. While several issues remain untackled, including the Cauvery water-sharing dispute with Tamil Nadu, and the killings of MM Kalburgi and Gauri Lankesh, the Chief Minister has invested much energy in reaching out to the state’s socially backward sections through assorted schemes and subsidies. The latest to add flavour to his populism are the party’s Indira canteens, selling breakfast for Rs 5 and meals for Rs 10.

The BJP is trying to turn the tables even on this, arming itself with figures to claim that the state’s Anna Bhagya, a rice subsidy scheme, is actually funded by the Modi Government at the Centre. A note prepared by the party says the state government is hiding the actual subsidy it is receiving from New Delhi’s coffers for the flagship scheme started by the Vajpayee Government and refurbished as the National Food Security Law under Modi. According to the BJP, the Modi Government has provided 217,000 tonnes of rice, purchased at a cost of Rs. 32.64 per kg, and given it to the state at Rs 3 per kg.

In the run-up to the elections, however, the Siddaramaiah versus Yeddyurappa tussle over Karnataka’s Lingayats could overshadow the financial details of handouts, which will only make the battle fiercer. The lines of support are not as clear-cut as they were in past polls.