Kashmir: The Cost of a Statement

The architect of the BJP-PDP alliance in Kashmir has been sacked. Will it affect the partnership? 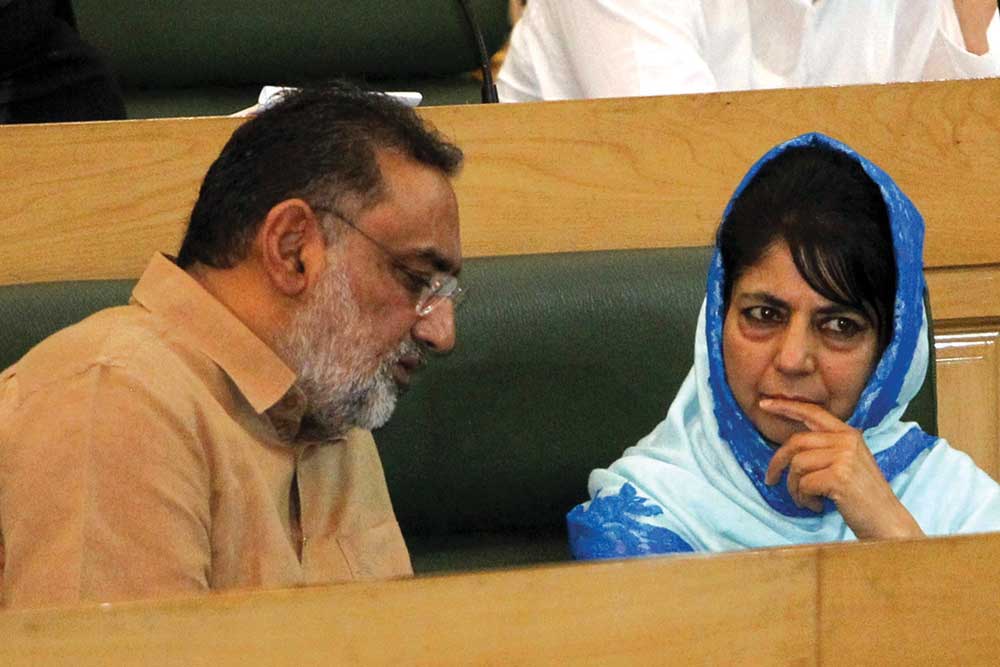 A FEW WORDS spoken in Delhi that raised a political storm in Kashmir have led to the sacking of the state’s finance minister, Haseeb Drabu. On March 9th, Drabu, while speaking at an event organised by the PHD Chamber of Commerce and Industry, said that the Kashmir issue was not a political one but a social issue and that Kashmiris were “barking up a wrong tree”.

The speech, which went viral on WhatsApp groups in Kashmir, resulted in his exit two days later. Drabu’s boss, Chief Minister Mehbooba Mufti sent a letter to the Governor, requesting him to drop Drabu from her Cabinet. Before this, the People’s Democratic Party (PDP) sought an explanation from Drabu over his remarks in Delhi, asking him to retract his statement. The head of the party’s disciplinary committee, Abdul Rehman Veeri, said his statement contradicted the “very belief and core agenda” of the PDP.

Drabu, 57, is widely regarded as the main architect of the BJP- PDP alliance that holds power in Jammu & Kashmir. After state elections threw up a hung Assembly in 2014, it was Drabu who negotiated with BJP leaders and enabled the tie-up. Many saw it as an ‘unnatural alliance’, since the PDP is known as a party that practices soft separatism, while the BJP is considered a radical Hindu party in Kashmir Valley.

In his first press conference after taking over as Chief Minister of the state with the support of both parties, the PDP’s late leader Mufti Mohammed Sayeed said that Drabu had shown them dreams that they were waiting to see fulfilled. After Sayeed’s death in 2016 and his daughter Mehbooba Mufti’s succession, Drabu became an even more vital bridge between the PDP and BJP. Ideological clashes between the two parties grew more frequent, especially after the state saw unrest in the wake of militant commander Burhan Wani’s death in July 2016.

Before his foray into electoral politics, Drabu’s image in Kashmir was more that of a technocrat than a political leader. His rise in Kashmir, say sources, began after he married into an influential family through which he made an acquaintance with a senior PDP leader. Soon afterwards, in 2003, he was appointed the state’s chief economic advisor under the then PDP government. In the 90s, Drabu had served as a member of the Centre’s Economic Advisory Council after he managed to impress a prominent Congress leader in Delhi, say sources in the Congress party. In 2005, he was made CEO of J&K Bank. Earlier, he had served as one of the editors of a national business newspaper.

In 2010, he was asked to resign as J&K Bank’s chief by the then National Conference (NC) government of Omar Abdullah. After 2011, not much was heard of him—till he resurfaced in 2014 as the PDP’s electoral candidate from Rajpora constituency in South Kashmir’s Pulwama district. “He is not a mass leader at all; he only won because of Mufti Mohammed Sayeed,” says a journalist in Kashmir.

Sources in the PDP say that Drabu had angered even Mufti and that the party was looking for an opportunity to punish him. After being elected he has visited his constituency once in three years, delegating its responsibility to the son of a friend who is a former journalist

Sources in the PDP say that of late he had angered even Mehbooba Mufti and that the party was looking for an opportunity to punish him. After being elected, sources say, he has visited his constituency only once in the last three years, delegating its responsibility to the son of a friend who is a former journalist.

In March 2014, Drabu found himself in a spot of controversy when the former militant leader Yasin Malik said that the technocrat had been an advisor to his militant organisation JKLF in the early 1990s and that the two would talk for hours and that Drabu often praised him for his Front’s efforts to liberate Kashmir. Malik claimed that Drabu told him that whenever he is in Mumbai, he makes it a point to visit the ancestral house of Muhammad Ali Jinnah to pay his respect to Pakistan’s founder for his wisdom in the creation of that country.

Some of his party colleagues allege that Drabu often behaved as BJP’s man in Kashmir. “It would seem as if he was the Centre’s representative here and not the other way round,” says a PDP leader. It is because of him that the Centre was able to pass GST in Kashmir. In February 2017, Drabu had another brush with controversy after a video of his at an event of veterinary doctors got leaked in which he is seen saying that the 450,000 employees of the J&K government were not doing any work and that they were being paid unnecessarily. A year earlier, his wife, who runs an upmarket tea shop in Srinagar, had taken to social media to criticise the government her husband was a part of, expressing outrage over what she called ‘the killings and maiming of children’.

On March 13th, Drabu issued a statement saying that at the PHDCCI event he had tried to make the point that “Kashmir was not only a political issue to be resolved by the nation state of India and successive governments at the Centre and the state, but that there is a social issue that needs to be resolved at the level of civil society”. What he had said, he added, did not go “against the articulated and stated political position of the PDP.”

Meanwhile, the senior NC leader Farooq Abdullah has said that the PDP has taken the right decision by sacking Drabu. Senior Congress leader Saifuddin Soz has said that the state’s former finance minister had “deliberately made the statement to prove his credentials to quarters that matter to him”. “Nobody should take him for his ‘naivete’,” Soz said in a statement.

With Drabu gone, there are murmurs in Delhi that his statement might have been deliberate and that it has to do with a BJP-RSS plan to create a local alternative to both the NC and PDP in the state. The RSS is said to be keen to ultimately form a party that toes a nationalistic line in Kashmir instead of the opportunistic soft separatism which PDP is known to peddle. “That has been a dream of many parties in New Delhi,” says a journalist in Kashmir. “But none of it has worked so far.”

While that is in the realm of speculation, the BJP and PDP are now watching each other closely. The question is: will the alliance continue?