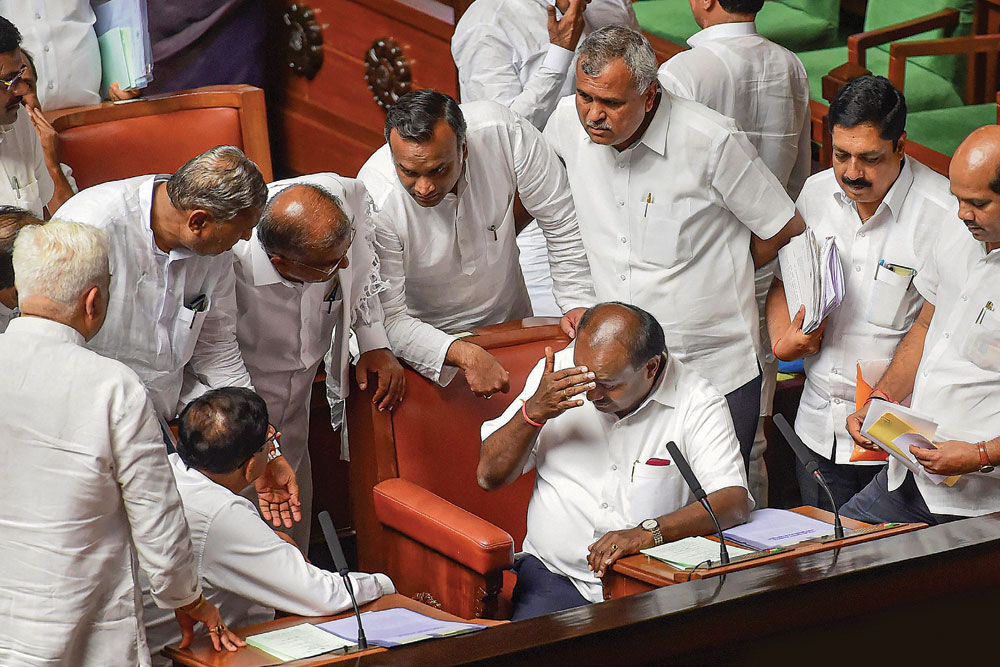 
ON JULY 23RD EVENING, after 14 months as Karnataka Chief Minister, HD Kumaraswamy’s luck ran out. His own prayers, his brother HD Revanna’s magic lemons, even a lucky room at the Taj West End—all failed to arrest the ineluctable fall of the Congress-Janata Dal (Secular) government, which had run athwart of the aspirations of 19 of its Members of Legislative Assembly (MLAs). Twenty legislators, including Congress Ballari (Rural) MLA B Nagendra, reportedly unwell, were absent on the day of the long-anticipated trust vote, whittling down the numbers of the coalition, which had come to power after the Assembly elections in May 2018 with a strength of 118 in a house of 224. Leaders of the Bharatiya Janata Party (BJP), with its 105 MLAs intact and more slated to join its ranks, flashed victory signs after bringing down a government that was birthed only to keep the party out of power in the state. For the BJP, which coasted to a second term in power at the Centre, 2019 has been an annus mirabilis. Close on the heels of the party’s sweep of 25 of the 28 parliamentary constituencies in Karnataka, BS Yediyurappa, the 76-year-old state party president and a man of antic conceits, may finally be able to put the ignominy of his 55-hour stint as chief minister on the back of a fractured verdict in the Assembly polls last year behind him.

While former Chief Minister Siddaramaiah, who was also the Chairman of the Coalition Coordination Committee, has accused the BJP of indulging in “wholesale” skulduggery, the party maintains that the hollowing out of the Congress-JD(S) combine is the result of internal upheavals. “The rebels felt they were being dictated to. The government was not letting them function as individual legislators and ministers. Most of them, if not all, including Vijayanagara MLA Anand Singh, will shortly support us in our bid to form the government. There will be no need to go for fresh elections,” said B Sriramulu, the BJP’s Tribal leader from Ballari, and the Molakalmuru MLA, speaking to Open on July 24th. “Some of them may be given ministerial berths but what is wrong with that? Didn’t the coalition government undertake Cabinet expansions to accommodate some of the disgruntled MLAs? Even after that, they remained unhappy because coalition leaders failed to address genuine grievances,” Sriramulu said.

THE CONGRESS AND the JD(S), which had spared no effort over the past month to win back the renegades, stressed they wouldn’t welcome them back “even if the sky fell”. “I am very hurt by the actions of rebel MLAs, who were my friends,” said DK Shivakumar, the Congress’ redoubtable arbiter and chief minister-in-waiting, ahead of the no-confidence motion on July 23rd. The minister for irrigation in the Kumaraswamy government quoted Voltaire: “Lord, protect me from my friends; I can take care of my enemies.” Amid the high-tension debate and the dramatic sleepovers in the House over the past few days, Shivakumar—with his hard- edged practicality, irrepressible wit (“The way KR Puram rebel MLA Byrathi Basavaraj ran to the Speaker’s office would put even Ben Johnson to shame”) and displays of after-hours camaraderie with opposition leaders (“There is nothing wrong with making you deputy chief minister, but the BJP won’t do that, they will choose someone else,” he joked to a smirking Sriramulu)—emerged as the face of resilience in the Congress in its hour of despondency. In debating the trust motion, even as the BJP’s silence betrayed its gross hunger for power, Congress and JD(S) leaders, including Siddaramaiah, Priyank Kharge, Krishna Byre Gowda and KM Shivalinge Gowda, demonstrated an understanding of constitutional law and the grace to face their own fallibility.


BS Yediyurappa, the 76-year-old state BJP President, may finally be able to put the ignominy of his 55-hour stint as chief minister last year behind him

The odds, of course, were heaped against the embattled government. Governor Vajubhai Vala, allegedly a BJP sympathiser, wanted a trust vote without delay. The Supreme Court had ruled that rebel MLAs could defy their party whips without being disqualified, thereby paving the way for the fall of the government. More worryingly, it has set a precedent for judicial interference in a crucial legislative matter. “We all go home knowing we tried the best we could. For all the charges of disunity in the coalition, all of us were more than willing to compromise for the sake of stability,” says JD(S) leader and higher education minister in the outgoing Cabinet GT Deve Gowda, who tried, in vain, to convince rebel JD(S) MLAs to return. Deve Gowda, who had vanquished his bête noire Siddaramaiah in Chamundeshwari by over 36,000 votes in the 2018 Assembly elections, said earlier this month if the coalition coordinators thought that installing the latter as chief minister would quell rebellion, he was all for it. Among the first wave of rebels who left the coalition early in July were supporters of Siddaramaiah, leading to speculation that it was the former chief minister who had instigated them—a theory that has since lost currency.

“There are two kinds of leaders who have quit: veterans who felt incapacitated as part of a shaky and ineffective coalition and MLAs whose popularity has been declining and who cannot win another election on their own,” says a senior BJP leader who did not wish to be named. “Once they join us, it is Narendra Modi who is the candidate. The results of the Lok Sabha elections have made it clear to everyone that people want a strong leader.” Many of the rebel MLAs, including Pratap Gowda Patil, a former Yediyurappa loyalist who won from Maski on a Congress ticket by 213 votes, and actor-politician BC Patil from Hirekerur, had scraped by with slender margins in the 2018 Assembly elections.

Holed up in a hotel in Mumbai, rebel legislators repeatedly invoked their disenchantment with the government to justify their desertion. The word ‘interference’ was often used in connection with the state Congress and JD(S) top brass. Indeed, it has emerged as the trigger for the resignation of senior leaders like R Ramalinga Reddy, the BTM Layout MLA, who cited differences with Deputy Chief Minister and in-charge of Bengaluru G Parameshwara. Though Reddy eventually returned to support the government in the trust vote, the damage had been done. His dissent emboldened other MLAs—Basavaraju, Munirathna, ST Somashekhar and MTB Nagaraj—from the Congress stronghold of Bengaluru to break away. They had all complained of ‘internal problems’ emanating from the high-handedness of the top leaders of the coalition, especially Parameshwara and Public Works Minister and brother of Chief Minister HD Kumaraswamy, HD Revanna. While wads of cash may or may not have eased their journey across the aisle, there can be little doubt that the rebels—13 from the Congress, three from the JD(S), two Independents and the lone Bahujan Samaj Party MLA—felt compelled to withdraw support. AH Vishwanath, a four-time MLA and Kuruba leader who was made JD(S) state president a year ago and resigned after the Lok Sabha polls assuming responsibility for the party’s poor show, abandoned ship reportedly because he felt sidelined in a rapidly shrinking party. His exit, along with that of Narayana Gowda, the Krishnarajpet MLA who said he was forced to resign because of constant interference from former Prime Minister HD Deve Gowda’s family, leaves a gaping hole in the JD(S) bastion of Mysore- Mandya. Up north in Bombay-Karnataka, Ramesh Jarkiholi, the Gokak MLA and a powerful sugar baron who was dropped from the Kumaraswamy Cabinet in December, had been working to engineer a defection in the Congress for months. Shivakumar’s interference in local politics in Belgaum was reportedly the last straw.

“This is a wake-up call for parties pitted against the BJP,” says psephologist Sandeep Shastri. “The BJP has, of course, fished in troubled waters, but the disarray in the Congress national leadership after the Lok Sabha elections and the fact that the Karnataka alliance was filled with untenable contradictions paved the way for the BJP’s eventual victory in the state.”

In a heart-on-his-sleeve farewell speech ahead of the trust vote, the outgoing chief minister peddled the tired trope of the wronged, self-effacing politician and launched a screed against political poaching and the threat to democracy that it posed. He closed, however, with a practical warning to the BJP: if the party, which now enjoyed a frail majority, rushed to stake claim to form a government, a hostage situation may soon repeat itself. Stability may well be the unobtainium of Karnataka politics, but the BJP sees pure potential in uprooting the Congress from the state. “Many years ago, a weed began to sprout all over the lawns of Bangalore. It was so rampant and vile that people were paid per kilogramme for uprooting it. That weed was called Congress grass,” says a senior BJP leader. “It is time to employ the same strategy in politics.”