Karnataka: The Coaltion of Utmost Unha﻿﻿ppiness 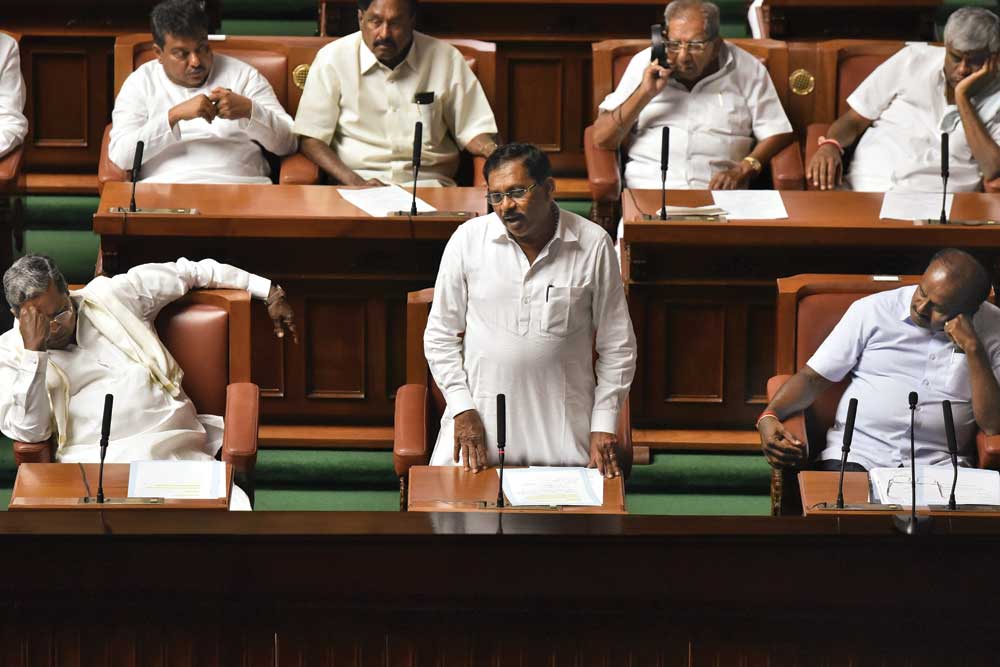 NO ONE IS HAPPY in Karnataka. Not the BJP, which narrowly missed annexing another state to its empire when it fell seven seats short of a simple majority in the May 12th elections to the Assembly. Certainly not the Congress, whose outgoing Chief Minister and star campaigner Siddaramaiah had set out to buck anti-incumbency with pro-poor politics, only to watch the party come crashing down from 122 to 80 seats. One would think the JD(S), which has realised its dream of playing kingmaker in a hung Assembly, would be jubilant after driving a hard bargain—12 out of 34 ministerial berths in the coalition government, with just 37 MLAs in the House, and a chance to present a ‘full-fledged’ budget. But the unhappiest man in Karnataka, or so he claims, is the one wearing the wattle crown of Chief Minister. On July 14th, watching HD Kumaraswamy’s teary-eyed intonation of his own misfortune, one couldn’t shake off memes of Brazilian footballer Neymar Jr feigning critical injury on the field. Addressing his partymen at an event to felicitate him in Bengaluru, the JD(S) leader dubbed himself the Shiva who must swallow the poison of heading the coalition government. “I am not happy with the situation. No one understands the kind of jugglery I have been doing for the past month to convince everyone to okay the loan waiver,” he said, referring to the Rs 34,000 crore farm loan waiver scheme he announced as part of the government’s maiden budget. The JD(S) manifesto had promised to waive all farm loans and to provide family maintenance allowances to women earning less than Rs 5,000 a month besides a monthly pension of at least Rs 6,000 to the elderly. But on July 5th, Kumaraswamy was forced to take a more practical stance, waiving all defaulted crop loans, capped at Rs 2 lakh per family, given till December 31st, 2017.

The Chief Minister’s hand-wringing may not mean that the two-month-old coalition hovers on the brink of disaster. He has since clarified that when he got emotional in front of his partymen, he “did not speak about the Congress or any Congress leader”. “I didn’t mention the Congress in my speech. It was a party programme and I got emotional, the media misinterpreted my speech,” Kumaraswamy said on July 17th. Rather, the Chief Minister’s speech was one of several attempts by him to deflect blame and responsibility. Soon after taking charge, he had made another off-key remark, alleging he was at the “mercy” of the Congress and not the 65 million people of Karnataka who had failed to give him a decisive mandate. Kumaraswamy at his most lachrymose is hoping to turn the tables on his detractors, chief among them Siddaramaiah, his friend-turned-foe and the head of the coalition coordination committee. The former Chief Minister, who presented Karnataka’s last budget three months ago, has taken issue with the hike in petrol and diesel prices proposed by Kumaraswamy and has also asked him not to cut the provision of rice under the Anna Bhagya scheme from 7 kg to 5 kg.

Lacking a popular mandate, the JD(S) also faces flak on social media for being a ‘Harama’ party—present only in Hassan, Ramanagara and Mandya districts—that seems to care little about the state’s overall development. Criticism of the government’s alleged apathy towards non-Vokkaligas, and a ‘Not my chief minister’ campaign have further blunted the Chief Minister’s confidence. A video of a student from Yemmemadu in Kodagu district, asking Kumaraswamy to visit and to provide relief to rain-affected farmers in the region, has gone viral on social media.

“We expect the Chief Minister to be more courageous,” says Dinesh Gundu Rao, the newly-appointed president of the Karnataka Pradesh Congress Committee (KPCC). “He seems to have been under some stress but he is back now and we fully support him. A chief minister will have to face immense pressures. Even with one party ruling, the former BJP government under BS Yeddyurappa had to face dissidents and resort politics.” The KPCC office on Queens Road in central Bengaluru is plastered with posters welcoming Rao, 48, and congratulating outgoing president G Parameshwara, who is also the Deputy Chief Minister, for his service to the party. Right off the bat, Rao says his twin priorities as KPCC chief are to ensure harmony in the coalition and to activate party cadres to bounce back in time for the 2019 Lok Sabha polls. “We did a lot of work. The state registered high GSDP growth under the Congress government, we created jobs and brought in investments. It was a stable government, with no dissidents to speak of. But we failed in the perception battle where communal forces won by branding us as ‘anti-Hindu’. That was one big factor in the coastal and Malnad belts, where many of our MLAs who had done excellent development work, still lost by over 20,000 votes,” Rao says. “There is a targeted effort to make sure that the coalition does not function, but to counter false propaganda and the forces of Hindutva, the government will stay in power and complete its term.”

“We expect the chief minister to be more courageous. He seems to have been under some stress but he is back now and we fully support him” Dinesh Gundu Rao, president of the Karnataka Pradesh Congress Committee

Thanks to a high-pitched campaign by the Sangh Parivar, which turned the murders of Hindu activists in the state into a serious poll issue, the BJP won 16 out of 19 seats in the Karavali region comprising Uttara Kannada, Dakshina Kannada and Udupi districts. The Congress, crippled by the defeat of Ramanath Rai and Pramod Madhwaraj, former ministers who represented Bantval and Udupi respectively, will have to double down on its efforts to regain lost ground. “The party is being written off as a spent force in these parts even as the saffron fold grows from strength to strength,” says BV Seetaram, who owns and manages Karavali Ale, a Mangalore daily. “It will be very difficult to stage a comeback, especially with the region feeling left out. The fishermen community, for instance, expected a loan waiver to be announced in the Budget and they stand disappointed.”

Minister for Urban Development and Housing UT Khader, whose victory from Mangalore came as a saving grace for the Congress, says it is unfair to expect doles for every community in the first year of a new government. “The coastal districts have been getting their due. Don’t forget that this is the second budget this year and therefore a supplementary one. It builds on Siddaramaiah’s vision, with a 10 per cent value-add. It was he who decided to continue giving kerosene subsidies for fishermen even when the Centre slashed the quota. There is no change in these provisions now.” A JD(S) leader from the Old Mysore region—it accounts for 29 of the party’s MLAs in the current Assembly— says on condition of anonymity that there is nothing “supplementary” about Kumaraswamy’s budget. “He genuinely wants to do good, but some proposals, although well within the range of financial discipline, were turned down during talks held with the High Command in Delhi and with senior leaders in Bengaluru. If Kumaraswamy anna is a frustrated man today, it is because of Siddaramaiah,” says the MLA.

The coastal belt did not, after all, vote for development, argues Gundu Rao. “Most of them voted along communal lines. But this does not mean they will be left out of our development agenda.” The Congress does intend to address the regional skew in the government, Rao says. Six ministerial berths allotted to the party are yet vacant, and it expects to induct some MLAs from north Karnataka in an impending Cabinet expansion. “The Congress performed well in Bangalore (15 out of 28 seats) and in Hyderabad- Karnataka (21 out of 40 seats); naturally we have more representation from these regions,” Rao adds. The party’s decision to back a movement for a separate religion for Lingayats backfired, costing it 14 seats in Lingayat dominant Bombay-Karnataka and 10 in Central Karnataka.

WE PAUSE WHEN A secretary in a safari suit rushes in bearing a phone with senior Congress leader Mallikarjun Kharge on the line, seeking Rao’s opinion on his statement to the media the previous day. Reacting to Kumaraswamy’s outburst, Kharge had said that running a coalition came with its share of problems. “All one can do is face them. Simply expressing (worry) would not give a good message to people who supported secular parties. Kumaraswamy should be courageous to face such circumstances. He has to fulfil the desire of the people,” he had said. Rao nods his approval—the statement did hit the right note. Other Congress leaders, such as KB Koliwad, have been openly critical of Kumaraswamy’s uneasy relationship with Siddaramaiah. Koliwad, in an acerbic statement, accused some of his own party leaders, without naming them, of “tormenting” the Chief Minister.

There are signs of strained equations within the party ranks, with dissident leaders seeking out Siddaramaiah, the leader of the Karnataka Congress Legislature party, to rally behind him in case of a showdown with Parameshwara. Lobbying for posts to boards and corporations—divided up between the Congress and the JD(S)—is in full swing and many egos will have to find affirmation here. “There is discontent among 15-20 MLAs who lost their seats despite winning more votes—it is the Congress’ positioning vis-a-vis the opposition that is to blame, not our performance,” says a former Congress MLA from Hassan. “Unless these concerns are addressed, the party see a wave of defections in the months to come. The BJP is already fishing in these troubled waters.”

To paraphrase Milan Kundera, on the surface, the Congress- JD(S) pact is an intelligible lie; underneath lies the unintelligible truth. “The immune system is still developing,” as UT Khader puts it. “If the child should fall sick, the medicine will have to be measured and dispensed immediately.”