Tandoori Tea, Binglish Slogans and the Cautious Forecasts of Poets 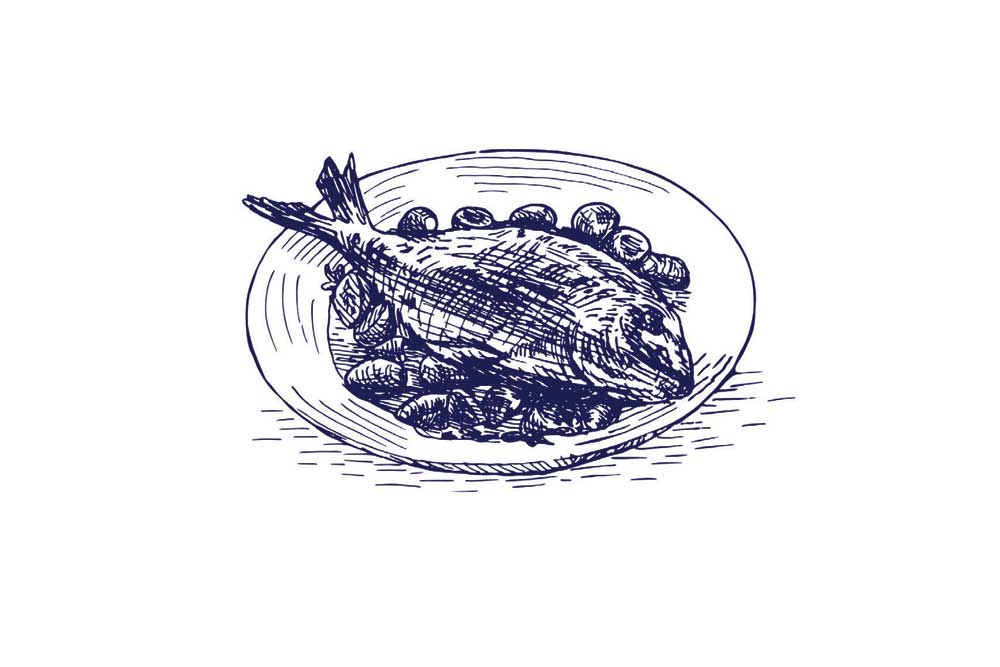 IT TAKES me a few minutes to notice something that isn’t there. There is no tension in Petrapole.

We are standing on the line which a British lawyer, Sir Cyril Radcliffe, drew in August 1947 to seal Partition and shatter the unity of Bengal and India. Seven decades later, this small town on the Ichamati river has the faint bustle of normalcy and the relaxed feel of friendship. A steady flow of people step out of buses, three-wheelers and the occasional car to walk across into Benapole on the Bangladesh side. The process takes less than half an hour, says a BSF trooper who has sauntered towards us at about the same pace as we have strolled towards him. He dutifully checks what we are doing in open space instead of going through the customs and immigration sheds on the right side of the road. Border tourism, I reply. Ah. Quite all right.

Petrapole is the precise opposite, in every way, of Wagah, the only point at which you can cross by land to Pakistan, over 2200 km to the west. Wagah is an arid space consumed by brittle silence, bottled within a hostile vacuum. In Petrapole, you hear the small-talk chatter of friendship between countries who have picked up positive strands of culture and history, and applied them to real life.

THE BOOKENDS of a frontier economy are need and opportunity. The need is predictable; the opportunity, here, is delectable. A queue of heavy trucks wait with goods for export, and while papers are being stamped, drivers and attendants relax in a cluster of hole-in-the-bazaar restaurants. One dhaba advertises, in red neon, a special meal of the fabled Hilsa fish curry. Logically, this eatery should be in Bangladesh. For reasons known only to God, and never explained to Bengal, this magnificent fish becomes a class apart in the rivers of East Bengal, far superior to its cousins in West Bengal. I have no doubt that the Hilsa being cooked in Petrapole has come from the country which begins ten yards away. Fish swim in rivers but live above the law.

We are about 80 km from Kolkata, on the Jessore Road. The boring name of this artery is National Highway 35. It could do with some attention from Nitin Gadkari, not least because it leads to the busiest border between civilised neighbours who seem determined to remain civilised. Both sides of the highway teem with towns dressed in a single line of shops. The variety is impressive.

We see a Royal Enfield showroom, and a Car Bazaar nearby Gaighata. Further east, you can purchase Italaka marble, although the stone might be less Italian than it sounds. There is nothing exaggerated, however, about a cup of Tandoori tea at Habra. [It’s complicated, but can be made.] Signs of shifting interest are evident everywhere in an area that was completely rural not too long ago; you can now join a class for Zumba Yoga Dance. If teenage football is your preference, you could watch a club called East Bengal Extremists. The name is technically correct, for we are at the eastern extreme of West Bengal.

But the big news here is that the BJP believes it can win elections in this parliamentary constituency, Bongaon, this year. In 2014, the BJP was a distant sniff in the air. Today, the subaltern whisper is: “Chuppe-chaap, Kamal chaap”. There is a definite surge for the party, and we shall find out on May 23rd how far it has travelled. The contest is now between Prime Minister Narendra Modi’s BJP and Chief Minister Mamata Banerjee’s TMC.

THE IDEAL electoral victory is a combination of push and pull; when one side has pushed away voters and the other discovered the presence and credibility to pull them into alternative space. Without the pull, any negative push could stall, and protect an unhappy status quo. There is discernible, growing and frequently expressed voter distaste for Mamata Banerjee’s divisive politics, aggressive cadre and intemperate language. The pull comes from hope symbolised by Narendra Modi.

We broke for lunch at a restaurant in Habra which I will not name to protect the identity of the young man who organised some pretty good spicy chicken and vegetables. When politics eventually appeared on the afternoon’s menu, and conviviality had eliminated hesitation, what could we discuss except elections? “Mamata Banerjee,” he explained, “emerged from the villages, but has got lost in air-conditioned Kolkata. The villages have been left where they were. They will take their revenge.” He was referring to Banerjee’s game-changing campaign at Singur, in Chandannagar subdivision, where Tata wanted to set up a Nano car factory on 997 acres of farmland, with production scheduled to roll out by 2008. The Marxists, then in power, were fully supportive of such capitalism. Mamata Banerjee led a protest against the acquisition of land, igniting a fire that eventually consumed the Marxist fortress.

Villagers, said the young man, had realised that this was an empty victory. There was similar anger in other places. His home was in Asansol, and the news there too was bad for TMC. How many seats would BJP get? He would not venture beyond “Anek”, or many.

Since it’s Bengal, one can quote Jung. We can predict the future, said Freud’s colleague, when we know how we reached the present. Didi, the popular nomenclature for an increasingly unpopular leader, reached the present by repeating Congress’ mistakes: divide-and-rule power politics, dynasty and corruption. This is particularly ironic, because Didi rose to power wearing hawai chappals as a sign of her identification with the poor. She had no children, so she was considered beyond temptation.

The turning point came when she began to promote a nephew, Avishek Banerjee, as her successor. This was not a signal of abdication. She wanted an heir in Kolkata even as she dreamt of wider pastures in Delhi. Voters saw evidence of sudden new wealth when her nephew built a palatial mansion in the heart of Kolkata; it became a site of political tourism. Talk is inflationary. Corruption has a multiplier effect in the party cadre. There was soon talk of extortion at street and village level. The nouveau riche wanted to protect their power, and the last panchayat elections turned into a farce when over 25,000 TMC candidates won without a contest. Bengal heard the croak of democracy being stifled.

I assume it would please Mamata Banerjee to be known as the Achilles of Bengal. In which case, the nephew is her heel. 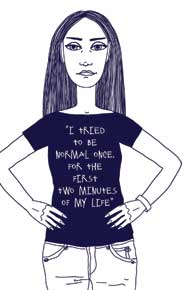 INTERESTING FACT. Didi’s hopes of becoming a future prime minister were not pinned on how many seats she would win in Bengal, but on the fact that Rahul Gandhi could never become PM, no matter how many seats Congress won. She dismissed the Congress president as “just a kid”. Sharad Pawar, while ruling himself out, offered three names: Mamata Banerjee, Mayawati and Chandrababu Naidu. No Gandhi, despite his alliance with Congress in Maharashtra.

An interesting fact of the 2019 campaign is the collapse of Rahul Gandhi’s inconstant credibility. A CNN-News 18 national trust survey, conducted with 31,000 respondents and aired on April 5th, showed that the Congress president’s acceptance crumbled from 26.1 per cent to 16 per cent during February and March. In comparison, trust in Modi rose to 63 per cent, or four times that of the Congress president.

BINGLISH BECOMES more exotic by the year. A ‘Beauti Parlor’ might be a simple mistake, but two signs put up by the State government on the Jessore Road have the stamp of authority. One marks a place labelled ‘Duckbungalow More’. ‘More’ is the phonetic translation into English of the Bengali ‘Morh’ or corner. ‘Duckbungalow’ is not a bungalow packed with ducks, but the old British ‘Dak Bungalow’. I also see a “Collage More”. I presume that means College Corner rather than a turn in the road full of graffiti, although one never knows during an election.

On the plus side, I also saw the best T-shirt slogan in a long while. A young lady in a crimson top proudly claimed: ‘I tried to be normal once. For the first two minutes of my life’. She is the free spirit who is going to determine the fate of elections one way or the other in the next decade. 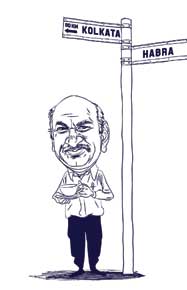 ‘THE THREE helicopters appear like a mirage out of the white-hot sky and descend towards a tiny village in northern India. For hours, thousands of people have waited in the 95-degree heat for the man they hope to re-elect as the country’s prime minister. The thrum of the rotors brings them to their feet, and they chant his name in a thunderous roar: “Mo-di! Mo-di.” This was written by a correspondent of the Washington Post, datelined Khudana, Friday, the 12th of April.

On the same day, in Bengal, Didi’s helicopter briefly lost its way en route to a campaign rally. She was late. Her crowd became restive and began to leave, according to a report in the Times of India.

Even the police have been impressed by the size of crowds for Modi in Bengal this year. There was a spectacular reception in north Bengal; but the momentum did not ebb as he moved south to Didi heartland. The mood in the once- envied industrial belt of Bengal, in cities like Serampore and Bhatpara, both about 20 km north of Kolkata, on opposite sides of the Hooghly river, seemed infectious.

TMC believes this will not convert into votes. But a BJP partisan reels off constituencies he thinks the party will win: Alipurduar, Raigunj, Balurghat, Maldah Uttar, Krishnanagar, Ranaghat, Bongaon, Barrackpore, Asansol, Purulia, Jhargram, Bankura, Birbhum, Howrah, plus Darjeeling in alliance, and probably Kolkata Uttar as well. It’s not too long now before those EVMs unpack their mysteries.

KOLKATA UTTAR, or North Kolkata, should be identified through demography, not geography. My new acquaintance from North Kolkata was an advocate who wrote poetry in English.

There is nothing called a bad poet in Bengal. The power of verse lies in the soul of the poet, not the mind of the reader. Criticism is conceit; the poet lives in the anguish of raw depths in a soul without borders, hierarchies, creed or class. He does not write poetry every day. He does for that blessed season in autumn when the Durga Puja specials are published, thirsty for creative contributions. The truly creative are modest; their eyes look south while awaiting any reaction to the travails of a sulphurous horizon where the full moon dies young.

My advocate friend was a practical man. He made his money out of deeds and documents. They were the mainstay of the judicial framework. A mistake could lead to irreparable injustice. His new passion was for a doctorate in a contentious issue of foreign policy. The sincerity of a North Kolkata face in quest of academic glory is a sight to remember.

Being practical, he was also cautious. There was some momentum for BJP in North Kolkata, he murmured, but he refused to commit himself to any prediction. Then suddenly his reserve cracked. He mentioned a separate constituency where the sitting MP was an acknowledged lout. “O baita haarbe-i haarbe! Gelo! Ghurni cholche, dada, ghurni cholche!” he exclaimed as many times as there were words. I can only offer a poor English version: “That son-of-a-gun is going to lose! Gone! Whirlpools are moving, brother, whirlpools are moving.”

MJ Akbar
MJ Akbar is the author of several books including the Doolally Sahib and the Black Zamindar: Racism and Revenge in the British Raj (Bloomsbury)