From nationalism to name-calling and from the insignificant to the intricate, this season of electioneering brought out the best and the worst of Indian politics 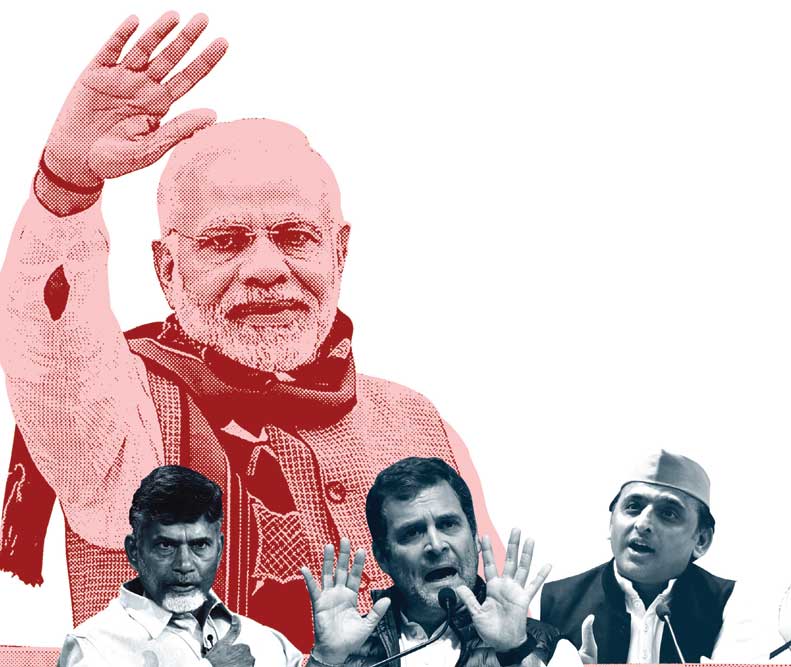 THE CURRENT ELECTION CAMPAIGN is probably the most bitter in recent memory. Ranged on one side is a Prime Minister greatly admired by his followers and disliked with equal intensity by his detractors; on the other side is a combination—not a coalition—of individuals and parties united by only one desire: the ouster of Narendra Modi from 7 Lok Kalyan Marg and New Delhi’s portals of power. After decades of decentralisation of power, Indians chose a path of re-centralisation in 2014 following mounting internal and external challenges. From that perspective, this is a fork-like election: India can go back to its old ways or continue strengthening the Central Government, an idea threatening too many Indian intellectuals and political parties alike. Regional politicians have much to lose in case Modi continues with his winning ways.

It is also a strange time for India. In the heat of the campaign it seems everything is here and now and the future really does not matter. The result is that few, if any, substantive issues have been debated in the last two months. The idea is simple: first we win, then we figure what to do. But that is an illusion. The same thing happened five years ago. But instead of quietly figuring ways to win the next time, Parliament became the arena for a dysfunctional politics. Now that same period of five years ago is being re-lived with double the dose of bitterness.

The opening shots of the 2019 election campaign were fired well before the first banner or poster was plastered anywhere. In February, Prime Minister Narendra Modi’s political position was described by his antagonists as ‘sticky’. In contrast to the ‘go alone’ strategy many expected, the party was conceding seats to its restive partners in Bihar and Maharashtra. Some alliance partners had bolted after calculating that Modi would not come back. Then, in late February, a former timber-cutter’s assistant blew himself up along with a busload of troopers in Kashmir. Within days, India has struck deep within Pakistani territory, the first time after 1971. Instantly, the election campaign heated up and for Modi’s rivals, their worst nightmare had come true: the confrontation between two nuclear-armed rivals would be cannon fodder for nationalist drum-beating in a highly contested election.

To an extent this proved correct. Modi and his party made fairly extensive use of the Balakot air strikes to claim national security was their forte. But nationalist themes did not saturate airwaves, contrary to claims made by other parties and their supporters. If anything, vikas remained a background theme. The opposition was caught off guard: should it counter the strident nationalism that is the BJP’s hallmark? Or should it put Modi on the mat for his less-than-stellar economic performance? Or sew up caste coalitions hoping the oldest of Indian identities would do the work where words were futile?

In the end it was a combination of all three, making a mash of everything. The trouble is the opposition never really got its act together before voting began. The key ingredient to defeat Modi, a united opposition in India’s battleground states, was nowhere to be found. The result is an inchoate campaign across India in what is probably the worst part of the year.

‘Ab Hoga Nyay’ is catchy. Launched over a weekend in early April, the Congress campaign slogan harks back to the themes the party has always been associated with: welfarist economics, emphasis on rural areas and figuring a way to reduce poverty. This time, however, it was in reaction to what the Modi Government had already announced in the 2019 Budget: PM-Kisan. Congress leaders were at pains to say this is not the case and ‘Ab Hoga Nyay’—a part of which is about the Nyuntam Aay Yojana, hence NYAY—has more dimensions than just distributing money to the poor. But barely a week later, the BJP matched that with ‘desh jhuke na, kaam ruke na’, blending a nationalist theme with the usual emphasis on development.

BJP’s campaign tactics and slogans continued to change during the course of the two-odd months, in response to what its rivals pitched. But all along, ‘Phir ek bar Modi sarkar’ and ‘Modi hai toh mumkin hai’ were kept alive as themes. These were slogans as much as they were actual themes of Modi’s five years in power. But two stood out. One, a muscular nationalism that responded to external challenges with a combination of tact—as in Doklam in the summer of 2017—or with the chain of events with respect to Pakistan this year. Two, development (in contrast to Congress’ welfare that was based largely on rights and entitlements). From distributing millions of LPG connections to poor families to housing and cleanliness campaigns were an essential part of Modi’s rule.

All this more or less evaporated in the later part of the campaign as markedly personal attacks were mounted on both sides. The Indian Army not being Modi’s fief led to reviving the controversy over the use of naval assets by the late Prime Minister Rajiv Gandhi three decades ago. In between, name calling that often came down to using expletives and unparliamentary language became a ‘normal’ thing. Modi, usually a fairly calm leader, was acutely combative.

If this was the situation among the BJP and the Congress, regional parties and leaders, from Lucknow to Kolkata and from Chennai to Hyderabad were engaged in a vitriolic campaign of their own. Uttar Pradesh, the key to power in Delhi, has witnessed less of a campaign and more of finessing caste arithmetic to defeat the BJP. Last time the party vacuum cleaned the state and bagged 73 of the 80 seats on offer. This time the competition is between this raw calculation and the combination of BJP’s organisational abilities and the performance of its Government. In ideal circumstances, voters assign weights to a number of factors in making the decision to favour one party or the other. It is also usual for Indian elections to be noisy affairs, making any deliberation chaotic. This time this is doubly so. On the one hand, Modi and his Congress rival Rahul Gandhi are slugging it out; on the other hand, regional parties are busy trying to undercut both national parties while keeping open their choices for any post-poll option. This combination of tactical ruthlessness and unscrupulousness in picking alliances is perhaps unique to India in the democratic world. Which way the wind will blow, with Modi or in favour of regional parties, is now just a matter of weeks.

There is something to be said about comparing the 2019 campaign with the ones in the past 15-odd years. There is little that links the election seasons of 2004 and 2009 with the current one. In terms of sheer political energy, the ongoing campaign makes the previous two lacklustre and even somnolent. In 2004, the Government of the day had notched some achievements on the economic front. The foundations for steady growth—which was witnessed over the next five to seven years—had been laid; infrastructure became an economic priority for the first time after many decades. Yet, for all this, the political leadership of the day had a rather timid slogan: ‘India shining’. The opposition, too, operated in a default mode: the accumulated mistakes of the Government were sufficient for it to simply walk into power. The rural distress—basically a reversal of sorts in what economists call the terms of trade between industry and agriculture, or relative prices between the two sectors, went against agriculture— that was sufficient to fuel the opposition campaign.

By 2009, the Government that had come into being after ousting Atal Bihari Vajpayee, had learnt its lesson. It never really let rural angst get out of hand. But that is an understatement: it actually changed the course of Indian policymaking by giving it a pronounced rural bias. The plethora of schemes that sent waves of money into rural India helped the first Manmohan Singh Government sail into its second innings. But in the 2009 campaign season there was a curious lack of political energy. No speeches stood out, nor was there any seat-to-seat campaigning. There was no need for it as policy had turned into a neat substitute for politics.

The year 2019 marks an end to it all. One may say that aggressive campaigning of the kind engaged in by Modi, and his right-hand man, Amit Shah is something new. The seat-to-seat fight is something new for sure. The politics of not giving an inch to your rivals is certainly a new phenomenon. Much of this has to do with the style of the duo. But it also has to do with the bitterness that has crept into the political system: the Congress party is yet to come to terms with its losses in 2014. The action and reaction sequence is complicated but the net effect is that politics in India is now a zero sum game. Perhaps that is one reason for the vehemence with which sides have been taken across the political spectrum—from the intellectual hangers- on in the system all the way to the main contenders for power.

In another sense, however, 2019 has marked resemblance to earlier episodes. For one, the allegedly presidential form of campaigning—in which political preferences and choices are all about an individual—are nothing new. In 1971, ‘garibi hatao’ was not just a slogan, it was all about Indira Gandhi. In 1977, when she lost, ‘Indira hatao’ was again only about her. In 1980, much like 1971, it was once again, ‘Indira lao, desh bachao’. The fact is that plebiscitary politics is a part and parcel of the Indian system. It was weakened only for a quarter century from 1989 to 2014. This was largely due to the politics of Mandal. It is safe to say that once that opiate wore off, India returned to its new normal: backing a strong leader. That was the case with Jawaharlal Nehru, with Indira Gandhi and now with Modi. But unusually, it is only in the case of Modi that fears of ‘presidentialism’ are touted as a threat to democracy. In no other case was that a problem. The reasons are not hard to discern.