With fresh elections on the cards in Jammu and Kashmir, can BJP turn the state’s two main political families irrelevant? 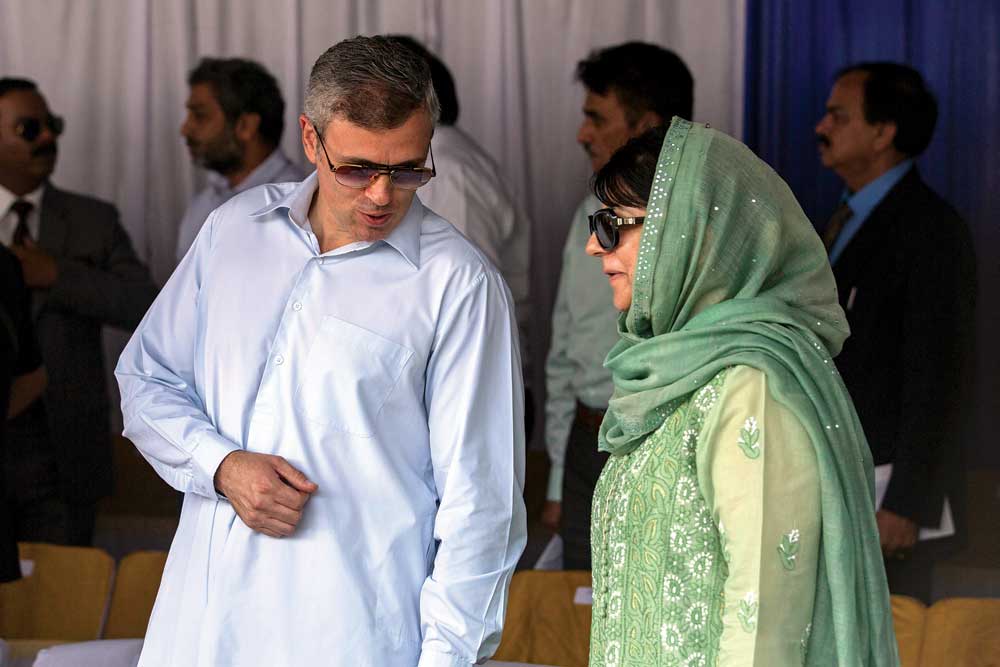 THE CHAIN OF events in India’s northern-most state, beginning from the absence of a fax tone at the Raj Bhawan in Jammu, took an interesting turn on November 27th. A short video clip of Jammu & Kashmir Governor Satya Pal Malik taken three days earlier went viral on social media, prompting him to issue further clarifications. In the clip, in response to a satirical comment made by the journalist Ravish Kumar at a gathering of students in Gwalior, Malik justified his decision to dissolve the state Assembly on November 21st. He said had he looked to Delhi for cues, he would have had to install a government led by Sajad Lone, and he would have gone down in history as a dishonest man.

While the Governor’s statement has been welcomed by both Mehbooba Mufti and Omar Abdullah, it has evoked an angry reaction from Lone, who now says he had spoken to Malik about staking a claim to government formation much before Mufti did. He claimed that on the Governor’s advice, he had tried to send him a fax, but it would not go through for three hours. ‘We had the numbers and would have emerged victorious in a constitutionally legitimate method. There should be no doubt about this,’ Lone said in a written statement.

Both Lone and Mufti had staked a claim, but, as Malik rightly says, neither submitted a list of legislators in his or her support. Mufti’s letter to Malik, which she later put on Twitter, said that Malik might have ‘gathered from media reports’ that the Congress and Abdullah’s National Conference (NC) had decided to extend support to her party, the People’s Democratic Party (PDP), for a government in Srinagar. Since June, the Assembly had been in suspended animation after the BJP pulled out from its alliance with the PDP, first forged in 2015 when Mufti Mohammed Sayeed led the state-level party and then recast in 2016 after his daughter Mehbooba Mufti took charge of it upon his death.

But November 21st was a public holiday on account of Eid, and, as Malik would later say, even his cook was on leave. No one, the Governor said, was attending to the fax machine. This, Mufti says, forced her to post her letter on Twitter.

Shortly afterwards, Lone, whose People’s Conference party has two MLAs (including himself), also posted a similar letter on his Twitter account which he had WhatsApped to Malik’s personal assistant, his claim backed by BJP support and ‘more than eighteen other elected members of the J&K State Legislature’, in his words. These members, Lone and the BJP were hoping, would come from the PDP. Indeed, the buzz about these MLAs joining Lone had been so strong in Kashmir that many had begun to speculate which MLA among them would get what portfolio in the new government under Lone.

But Malik chose to dissolve the Assembly instead, paving the way for fresh elections. According to the Election Commission, these could be held by May next year. There is a strong possibility that they would be held alongside the General Election of 2019.

Many in Kashmir now believe the BJP-appointed Governor fell for a PDP-NC-Congress trap by dissolving the Assembly. Whatever the reason behind Malik’s decision, it is evident Mufti was wary of some of her MLAs crossing over to Lone. Even as the Assembly got dissolved, a rebel MLA from her party, Imran Ansari, joined Lone’s party. “Both NC and PDP have the same agenda,” Ansari says, “and that is to promote family. In PDP, apart from family and a small coterie of outsiders, everyone else was ignored.”

Fresh polls suit the NC well, as it hopes to emerge ahead of other parties, given the resentment in the Valley against the PDP for its alliance with the BJP. The claim of its support to the PDP also suited the Congress since it does not want the BJP to score a political victory anywhere, leave alone Kashmir, prompting the party to float a balloon of support.

“We worked with the PDP, but on a common agenda. Here there was no agenda, no jhanda (flag), no discussion. That gives credence to the theory that maybe [the PDP, NC and Congress] wanted to push the Governor into a corner while they were not even ready to form the government,” Ram Madhav, BJP general secretary in charge of the state, tells Open.

Over the last several years, one idea of the Sangh Parivar has been to create a viable political alternative to both the NC and PDP. In the interim, an alliance with the PDP was formed because, as a senior BJP leader once put it, the party leadership’s goal was to hold fort in as many states as possible after the 2014 victory.

SINCE SHEIKH MOHAMMED Abdullah’s time, what has ailed India’s case in Kashmir was the tendency of Kashmiri leadership to speak one language in Delhi and quite another in the Valley. For decades, it remained an accepted norm that soft separatism was the only way to survive and win polls in Kashmir.

Many believe that the PDP’s formation was encouraged by the Centre during Atal Bihari Vajpayee’s tenure as Prime Minister to counter the NC’s sway in the Valley. But in no time, it turned into an even bigger espouser of soft separatism. In South Kashmir, the PDP’s stronghold, the party has about 30 per cent dedicated vote share. But about a third or more of the rest appear to support the radical Jamaat-e-Islami, some of whom vote PDP to keep the NC out. In return, these supporters expect Mufti’s party to go soft on terrorists and other radical elements. It is Mufti’s alleged ties with the Hizbul Mujahideen that resulted in Vajpayee’s refusal to share a dais with her in 2003 at a rally in Srinagar. The PDP’s soft handling of militancy had resulted in its escalation in South Kashmir.

In Sajad Lone, the BJP under Narendra Modi sees the chance of an alternative. In 2002, Lone was a young entrepreneur when his father Abdul Ghani Lone was assassinated by a Lashkar hit squad on instructions from across the border. As his father’s corpse lay in wait for the funeral, an angry Lone and his brother Bilal blurted out things against his father’s killers. But soon afterwards, they were silenced into submission. In a volatile Kashmir, anything could happen, and the Lone family did not want another bereavement. Afterwards, Lone even joined the Hurriyat for some time, but then opted out. In 2009, he unsuccessfully fought for a Lok Sabha seat.

Before the 2014 Assembly elections in Kashmir, Lone, who had been in touch with Madhav, had met Modi. “I could not make out whether I am talking to the PM or my older brother,” Lone said after emerging from that meeting. His party won two seats, including his, and he later got a berth in the PDP-BJP cabinet from the BJP’s quota.

Relations between BJP and PDP soured, however, and the former pulled out of the alliance this June. Since then, the former had been keen on Lone as the next chief minister.

“The whole effort of these parties (PDP, NC and Congress) was to block the fourth one. These two families [of the PDP and NC] have made politics in Kashmir Valley a prisoner. They do not want a real democratic people’s alternative to rise. It is the fear of the rise of Sajad Lone or the rise of a third alternative which forced these people to come together,” says Madhav.

What does this mean for Jammu & Kashmir? The situation in the Valley continues to be critical. Over the last 56 days, from October 1st, 60 terrorists have been killed by security forces. Anti-terror operations have intensified in the last few days; so far, 226 terrorists have been killed this year, a count rising almost by the day. Terrorist recruitment among Kashmiris has also increased; 178 men have joined terrorist groups this year, as compared to 128 last year, according to official figures.

The recent Urban Local Body elections recorded a voter turnout of 4.3 per cent, the lowest in Kashmir since 1951. In South Kashmir, which is worst affected by militancy since Hizbul commander Burhan Wani’s death in 2016, only 660 votes—1.2 per cent of the electorate’s—were cast. Since NC and PDP decided to boycott these polls, Lone’s party has been a beneficiary in Handwara, which is his constituency. The mayor of Srinagar city is from his party.

For now, Lone is making noises that please the BJP. He said he will not speak one language in Delhi and another in Kashmir. He said the state had become a prisoner of dynastic politics. But many believe that Lone is also a product of the same politics. “Abdul Gani Lone was a four-time MLA before he joined separatist politics in Kashmir in 1990,” says Ahmed Ali Fayyaz, a senior Kashmiri journalist.

A lot will depend on whether Kashmiris decide to vote, or not. For that to happen, the level of violence needs to come down. “If there is mourning in the air, expect very little voting,” says Sayeed Malik.

On his part, Lone says he wants to bring about genuine change in Kashmir. As more people join him, he says, his party will gain influence in other areas as well. “What base did the Mufti family have in entire Kashmir when it started?” he asks.

The BJP, on its part, is cautious. There are murmurs that opinion is divided between the Prime Minister’s Office and Madhav over whether Lone’s party is a viable option for BJP support in the long term.

“I am not making this statement subject to Sajad. I am saying that the political atmosphere in Kashmir Valley is ripe for a non-PDP, non-NC alternative. What form it will take, who will lead it, will it be one man or three groups, that is something we will have to see,” says Madhav.

For now, though, it is certain that Sajad Lone will be BJP’s candidate for chief ministership.

“We have to tell the people the truth, we have to call a spade a spade,” says Imran Ansari.

In Kashmir, that has always been a challenge. The BJP is now hoping that Lone will bite the bullet and survive to tell the tale.