Mayawati: The Redundant Symbolism of Statues 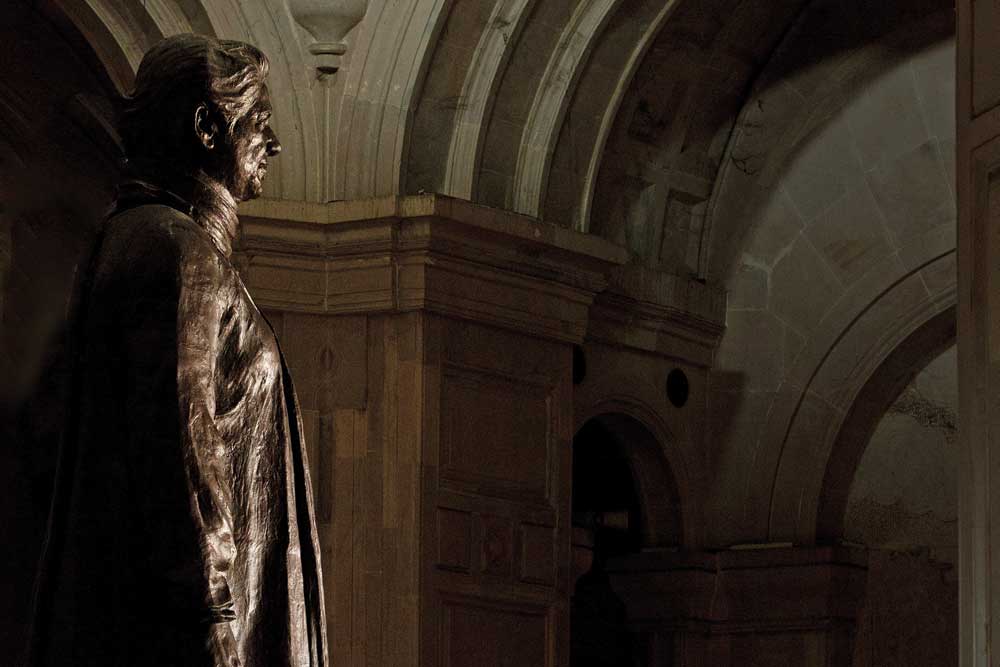 IN UTTAR PRADESH, MOST election pundits put a Pascal’s wager of sorts on the presence of silent voters who they said would stealthily vote for Mayawati. Their belief proved to be partially correct. The silent voter does exist in the state. But to the chagrin of many, this voter did not vote for Mayawati; s/he voted for Narendra Modi. The pundits are already busy working on pie charts to come out with plausible answers for Modi’s extraordinary victory. But nothing matters now. Modi’s plane has left for 2019, and in the smoke trail, most of his political opponents, Mayawati included, look like sore losers.

The truth is that most of us failed to see the writing on the wall. We were unable to predict the mood of voters. Perhaps the biggest miss on the pulse happened on the outcome of demonetisation. Journalist after journalist went across UP, putting up pictures of long queues and the chaos outside banks on Twitter timelines. We travelled to mofussil towns and spoke to a cross-section of people who told us they had been affected badly and that the Modi Government had ruined their lives. In western UP, we reported major anger against Modi among Jats. In the last few elections, Mayawati had lost a portion of her Dalit voters—16 per cent from her own Jatav caste and 35 per cent other Dalit voters in 2014 as compared to 2009, according to data put out by National Election Studies (NES). In 2014, about 18 per cent of Jatavs voted BJP.

But this time, Dalit scholars predicted that most Dalits would rally behind Mayawati. They said that news of Rohith Vemula’s suicide and the Una agitation in Gujarat had travelled wide and far and that Dalits now saw the BJP as their enemy. A statement by a senior RSS leader calling for an end to reservations was also seen as major factor in consolidation of Dalit votes. One Dalit post-doctoral fellow in Lucknow recalled a meeting in a UP village with an old man during a wedding. Upon telling the man that he was a post-doctoral fellow, the old man is believed to have said: “Oh, like that Vemula whom the BJP killed!”

Then there was the question of Muslims. The opponents of BJP feared that the Muslim vote would get split between the Samajwadi Party-Congress alliance and Mayawati’s Bahujan Samaj Party (BSP). In the past, Mayawati had won elections by including Brahmins in her party’s fold. Now, she wanted to win 2017 with the help of a Dalit-Muslim alliance.

Mayawati took it on big time in her election rallies; it was clear that her main fight was with the BJP. She spoke about Vemula and Una in all rallies. Quoting what she called her “special sources”, she told people that the RSS agenda was to finish reservations or render them ineffective. “After that, how many Vemulas will happen, I don’t have to tell you that,” she said. She said if she came to power, not only would she keep quotas intact but also provide for the economically poor among upper castes and also include the most backward classes under the affirmative action policy. For Muslims, she highlighted issues of concern ranging from the beef controversy to triple talaq. She appealed to them not to waste their vote on Akhilesh Yadav and Rahul Gandhi, but to help her party return to power.

Mayawati has ceased to be Dalit leader and is now only appealing to voters from her own Jatav caste. The consolidation of Dalits and Muslims, as she had hoped, has not happened at all

BSP watchers thought Mayawati had many advantages this time. After suffering a big setback in the 2014 General Election, where her party failed to secure any Lok Sabha seat in UP (or elsewhere), she had begun working for 2017. Her candidates were selected much before anyone else’s. In the run-up to the elections, she also shook hands with the notorious ‘bahubali’ (strongman), Mukhtar Ansari, to help her win seats in eastern UP.

Though exit polls had predicted BJP’s emergence as the single largest party, journalists who reported from UP were cautious about it. Behenji could not be dismissed completely, they said. A few days before the results were declared on March 11th, local authorities in Lucknow had ordered workers to wash and polish statues of Dalit icons, setting off a buzz in the journalistic circles that state bureaucrats knew best and that Mayawati was indeed coming back to power.

But as the results unfolded, it was clear that the BJP had a clear lead over its adversaries. In a matter of few hours, it was all over. The BJP had scored the best performance in the state since the Janata Party victory in 1977, according to the scholar Gilles Verniers. Of the 144 seats with a Dalit population above 23 per cent, BJP won 112. Though it had not fielded even a single Muslim candidate, the BJP won 31 of the 42 seats where Muslims comprised one-third of the electorate. An overwhelming 41 per cent of SC votes went to the BJP, whereas the BSP got only 25 per cent; 42 per cent of OBCs voted for BJP, while the BSP got 23 per cent of their votes. As many have warned before, Mayawati has ceased to be a Dalit leader and is now only appealing to voters from her own Jatav caste. Other big and small castes among SCs feel cut-off from her and have moved on. The consolidation of Dalits and Muslims, as Mayawati had hoped, has not happened at all.

The BJP also managed to consolidate the non-Yadav OBC vote in its favour. It managed to forge some significant alliances with small OBC-dominated parties like the Apna Dal. This it managed to do without isolating upper-caste votes, especially of Brahmins. In 2014, a Lucknow- based activist said that Behenji had lost then because the Dalit voter became a ‘Hindu’. In 2017, it only became more apparent.

But there is another major factor that has weakened her hold over Dalits.

IN AMBEDKAR Mahasabha in Lucknow, Ram Shankar, 52, works as a typist cum office secretary. Shankar is from the Mohanlalganj Assembly constituency. As a child, he says, he faced a lot of discrimination in school and elsewhere. “Due to the caste hierarchy, my morale was always low,” he says. In the 80s, Shankar came in touch with Dalit Panther activists. It was through them that Shankar got acquainted withthe teachings of Babasaheb Ambedkar. “They taught me that my blood needs to boil at the injustice that Dalits have faced,” he says. After struggling hard, Shankar managed to complete his graduation. But a job was hard to come by. “Ultimately, I was left with no choice but to take up this small job,” he says.

Kanshi Ram’s movement was social, whereas Mayawati’s movement is political, and in electoral politics so many things have to be taken into account

Shankar says he was exultant when Mayawati became Chief Minister. “We thought we have made history,” he says. When the BSP came to power with the help of social engineering with Brahmins, Shankar says he was disappointed but not much. “Kanshi Ram’s movement was social, whereas Mayawati’s movement is political, and in electoral politics so many things have to be taken into account,” he adds.

Shankar has three children: two daughters and a son. The son has finished electrician training at the local Industrial Training Institute and is now looking for a job. Shankar feels that the emancipation of Dalits will only come from education. He has sharp views about the Midday Meal Scheme. “It is the biggest detriment to a Dalit child’s education,” he says. Shankar believes that when a Dalit child goes to school, all his energy is focused on the meal instead of studies. “The Dalit kid is in a classroom, but he smells food which is being prepared in a corner and he thinks, ‘Looks like kheer is being made’.”

In his times, Shankar said, he would go to school in torn pyjamas and plastic shoes or sometimes even without shoes. But today, he says, he makes sure that his children have decent clothes. “After all, it is a matter of dignity,” he says.

Ram Shankar may know the importance of Mayawati’s rise to power. But it is very unlikely that it will appeal in the same fashion to his children. The new generation of Dalits do not feel the same way. Like everyone else, they want to rise economically and do well in life. They want to move beyond the symbolism of statues. And sometimes, they feel Mayawati is offering them nothing except symbolism.

In a 2012 article in the Economic and Political Weekly, the sociologist Andre Beteille points out how long-term changes in caste dynamics are being ignored. He says that in three major areas of social life, caste has been on a decline: ‘First, the observance of the rules relating to purity and pollution were becoming weaker. Second, the regulation of marriage according to the rules of caste was becoming less stringent. And third, the relation between caste and occupation was becoming more flexible.’

In other words, while caste remains an everyday reality even in cities, its stranglehold on society is nevertheless loosening up. And in the new urban order, there is a new middle-class among Dalits that is getting influenced by Modi’s new language, according to political analyst Badri Narayan.

In the 2012 article, Beteille also notes: ‘The consciousness of caste is heightened periodically by campaigns for electoral office which have become more spectacular, more extravagant and more costly from one campaign to another.’

The 2017 polls in UP may have heightened caste consciousness as well, but it is clear from the results that many in UP have taken a leap of faith. Caste equations, as Beteille points out as well, have played out mostly in the studios of private television channels. 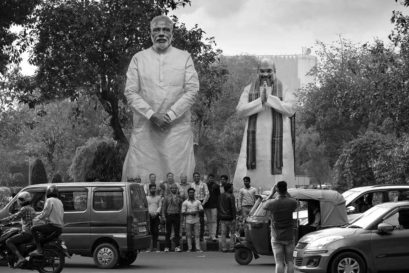