The Future Is Now 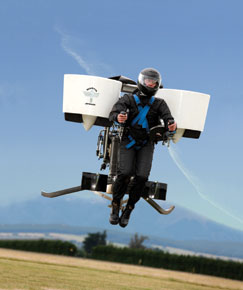 High technology has traditionally meant exclusivity, conjuring up images of glittering product launches aimed only at the richest layer of consumers. This perception is set to change. Already, the largest technology companies in the world are focusing on wide adoptability. They are building products that will change the lives of millions through internet connectivity, healthcare and mobility solutions. In the coming months, India will likely see some of these critical technologies come into play.

It was in June last year, at the Paris International Air Show, that New Zealand-based Martin Aircraft Company entered into an alliance with regional partners across the world. From India, they chose the Gurgaon-based M2K Group, which has a presence in charter aviation. The deal will help bring the Martin Jetpack, a personal flying device, to the Indian market in 2016. With commercial production of the jetpacks about to start, India may be able to buy the first few by the end of the year. “Jetpacks will be a paradigm-changing technology,” says Deepak Singhal, president, M2K Group. “They will prove useful in emergency and rescue services. We have projected significant demand in India from first-responder services [such as fire departments] and security forces.”

Man has always been entranced by the idea of flight. Among the modes of flight that early enthusiasts explored was the jetpack, a personal flying machine that would propel the user into the air. But challenges like fuel energy density consigned it to the pages of science fiction. Until Glenn Martin built his first practical jetpack in 1981. His company is starting commercial production of a vastly improved product this year. The device will be made available worldwide through regional partners. The Martin Jetpack consists of a purpose-built gasoline engine driving twin-ducted fans, which produce sufficient thrust to lift the aircraft and a pilot in vertical takeoff and landing, enabling sustained flight. “The Martin Jetpack is the world’s first practical jetpack, with potential usage spanning search-and-rescue, military, recreational and commercial applications, both manned and unmanned,” says Peter Coker, CEO, Martin Aircraft, speaking to Open. The Dubai Fire Department ordered 20 jetpacks last month to help reach inaccessible places. The Chinese government has placed an order for 100. The company sees a huge market for jetpacks in India. “With its ability to take off and land vertically (VTOL) and because of its small dimensions, it can operate in confined spaces such as between buildings, near trees or in confined areas that other VTOL aircraft such as helicopters cannot access,” Coker adds. The technology, which has been showcased at various exhibitions worldwide, is set to enter our lives.

“When a natural disaster hits, people often get no network coverage,” pointed out Google CEO Sundar Pichai when he was in India in December 2015. He was referring to the recent floods in Chennai, where people could not get in touch with their friends and families as the mobile networks had failed. The Kashmir floods and the Nepal earthquake are other examples of disasters where poor connectivity hindered rescue and rehabilitation work. Google’s Project Loon wants to resolve such issues by placing high-altitude balloons in the stratosphere to create an aerial wireless network. Using software, the balloons can be positioned near areas with no coverage or low network capacity. “People are figuring out the right model for providing aerial data connectivity without towers and optic fibre cables,” Pichai said.

India is the second largest internet user in the world after China, with an estimated 402 million users in the country as per a report by the Internet and Mobile Association of India. About 117 million, a little over 25 per cent, are in rural India, where net penetration is rapidly deepening because of smartphones. Despite the impressive data, a large percentage of the 1.25 billion Indian population remains offline. In rural areas where network connectivity is a pr0blem, the continuity of internet services is a challenge for any service provider. Project Loon is designed to connect people in rural and remote areas, help fill coverage gaps, and get people swiftly online in case of a calamity.

Google’s balloons will be placed about 20 km above the Earth’s surface in the stratosphere. Project Loon will take advantage of stratospheric winds, using software algorithms to place balloons where they can make the most of air blowing in the right direction. By co- ordinating their movements, they can be arranged to form one large communication network. According to Google, each balloon can provide connectivity to a ground area about 80 km in diameter using 4G technology. It aims to share the spectrum used by telecom companies to offer its services. However, Union Telecom Minister Ravi Shankar Prasad has expressed concern about possible interference with cellular transmission since telcos and Loon will both be using the 700-900 Mhz spectrum band. Pichai met Prasad specifically to address his concern, and cited examples of tests underway in Indonesia and Sri Lanka. If the Centre clears the proposal, the balloons could well be up in the Indian sky this year.

Other efforts are afoot to plug the gaps in internet connectivity across India. In June last year, the Central Government launched the Smart City mission with the aim of developing 500 smart cities in the country over a period of time. These cities would be equipped with all urban facilities, wi-fi being one of them. But laying a network of optical fibre will take considerable time and effort. Deepak Solanki and Sourabh Garg have come up with a novel alternative that they call Jugnu. The technology uses ‘Li-fi’: that is, light that can transmit information at high speeds. The duo has developed special LED Bulbs that can talk to one another and effect the transfer of data, thus creating a wireless network. Their Delhi-based company, Velmenni, has implemented the technology in Estonia. “If these LED Bulbs are used as streetlights, they can connect together to form a wi-fi network, and this is far cheaper than laying an optical fibre network,” claims Deepak Solanki. “For laying a 100-metre optical fibre network, the cost would be anything between Rs 1 crore and Rs 2 crore. With our technology, it is just $20, or Rs 1,300.” Velmenni has tested data speeds up to 1 gigabytes per second and claims it can take it up to 100 GB per second. Solanki says the company is in talks with telecom operators in the country.

Imagine a hilly region in Uttarakhand where the geographical conditions make it difficult to lay cable. A series of Velmenni’s LED bulbs could transform the area, lighting up the place while serving as a wi-fi network. Similar concepts are already in use elsewhere. In Dubai, artificial solar- powered palm trees allow people to look for city information and to charge their phones. In Shanghai, street lamps have touchscreens and cameras, and offer free wi-fi.

HEALTHCARE: Supercomputers to the rescue

According to the World Health Organization, cancer claims approximately 680,000 lives in India every year, making it the second leading cause of death in the country after heart disease. A million new cancer cases are diagnosed in India every year, and this is expected to rise fivefold by 2020. To compound the challenge, we have an acute shortage of oncologists, surgical oncologists and radiation therapists. Industry data reveals the ratio of oncologists to cancer patients is about 1:1,600 compared to 1:100 in the US. Further, these doctors must stay up to date with new treatments, research and best practices in patient care. What if someone could make their job easier? When that someone is Watson, an IBM supercomputer, the collaboration could potentially save thousands of lives.

IBM has tied up with Manipal Hospitals in Bengaluru to deploy Watson for Oncology. “Every day, about 120 new research papers are published on cancer,” says Dr Ajay Bakshi, MD and CEO, Manipal Hospitals. “It is just not possible for a doctor to go through all these papers.” This is where Watson for Oncology comes into the picture. Based on patient information provided by the doctor, the Watson system can sift through all the relevant papers and cases available anywhere in the world and pick the best matches. “On that basis, we can advise the patient on the best course of treatment available. If the patient wants a cheaper alternative, the system can suggest that too,” says Dr Bakshi. “Watson’s suggestions will thus improve the accuracy of cancer treatments in the country.” “It represents a major step in the transformation of healthcare in India,” says Vanitha Narayanan, managing director, IBM India. “With IBM Watson, we are bringing cognitive computing to the healthcare ecosystem to help deliver greater value to patients in India.” This is just one of Watson’s applications. IBM expects the technology to transform several other sectors as well.

Virtual Reality (VR) will finally make its presence felt in India in 2016. We have already seen a few product launches in January, with several other devices ready for launch in the first half of the year. Samsung VR, Letv 3D Helmet, Facebook’s Oculus Rift, HTC Vive, all VR products, have set their eyes on India. According to the Ericsson Consumer Lab report for 2016, the importance of visual information will continue to grow, especially outside of traditional screens. The way we use visual information will evolve and become more immersed in the physical world around us. Ericsson predicts that very soon we are going to see VR used in e- commerce, education and healthcare. However, the VR revolution will take off with entertainment and gaming. “Everyone is getting bored of TV and mobile screens,” says Niyam Bhushan, a technology expert based in Delhi. “They want something new, beyond the two- or three-dimensional images they are used to. The question is, can you offer me a seat at Wimbledon without my having to go there, or can I watch a Broadway show sitting right here in Delhi?” Perhaps not in 2016, but the VR future, clearly, is full of possibilities.