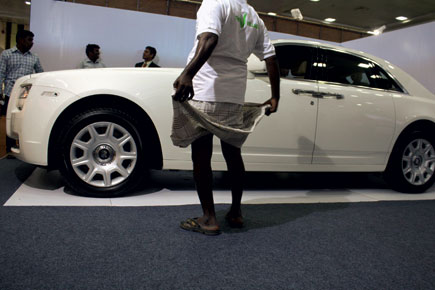 
For two days, earlier this month, the Chennai Trade Centre, whose bleak FRP façades and bleaker neon lighting exemplifies the commonplace, played host to a special brand of visitor—the ‘Elite-class’. As the big banner beside the venue announced, in wonky grammar, the CEO Lifestyle Expo was ‘The privilege show for the privilege few,’ including ‘Celebrities from Film Industry and Politics’, ‘Well Known Personalities’, and ‘individuals in the upper echelon of the business world’, namely the ‘CEOs CFOs MDs etc. of Top Companies’.

But who exactly were the consumers of the ‘CEO lifestyle’, tossing back those crystal champagne glasses, swooshing around south Chennai in stately stretch limousines, and festooning their homes with Greek nymphs and baby Krishnas? Surely not the middle-aged couple that stood transfixed before the antics of Yogi Bear in 3D? The young men who circumambulated the glossy arthropodal form of a Harley Davidson in a near-religious daze? The tall, thin man who sat in the passenger seat of car after luxury car, while his tiny sunglass-sporting son pretended to drive?

“They are only the premium class of people; the kind who are based on the first floor of the office,” says Karthik S, a sales executive at the LavAzza coffee machine stall. “People who own businesses in real estate or coal mines,” says Dinesh Babu, who is selling flats in Singapore skyrises.

“Whoever they are, you can’t identify [them] by the looks,” says Shaveta G, event manager, Eyeball Media. “These people dress up in a very simple way. Dhoti and slippers is the attire most times. You won’t be able to tell if someone’s a retail giant MD until he drops his business card. At most, they wear a gold watch, keep a gold pen [in their shirt pocket], and wear a big chain.” Still, she adds, “the rich here are definitely materialistic, they are just not show-offs. See how many luxury cars you can spot in RA Puram [in central Chennai]!” She has observed that, in Delhi, where she’s from, “even if people don’t have money, they look so rich: in branded clothes, and the latest mobile handset.”

G Sakthivel, who is CEO of the CEO Lifestyle Expo, certainly looks the part in his sharp black suit and backswept hair. He explains that he came up with the concept of a “comprehensive luxury show” three years ago when he realised that most trade shows in the south were for the “mid to upper class—and none for the high class”. The high class didn’t exactly return the favour that first year. “I lost nearly [Rs] 70 lakh,” he recalls, “because nobody had confidence in the Chennai market. They didn’t see it as a destination for luxury goods, like Ludhiana or Chandigarh. I paid the transit insurance for Rolls-Royce, Bentley… I suffered a lot.” But the next year, he says, business turned around. More than 4,000 people came, and exhibitors did Rs 120 crore worth of business. “Most of that was car sales,” recalls Sakthivel, “If somebody wants to have a lifestyle, first [thing they need] is a car.”

Apart from car-struckedness, a Chennai trait that’s been in evidence since automobile manufacturing first took off here in the 1940s, Sakthivel attributes the success of the expo to a few other factors. “In Chennai, people are impulsive and cash-rich. Most of them decide [on the spot]—and buy. Unlike Bangalore, where the expo had no response, the Chennai rich are entrepreneurs. They’re not salaried people.” He adds, “[The] Chennai market has high potential. All retailers here make Rs 500-600 crore [annually]; all jewellers make Rs 200-300 crore. They have the money, but they don’t know about luxury products. [We] have to teach them the lifestyle. This guy who’s worth Rs 5,000 crore or Rs 1,000 crore, we still have to teach him why he should drive an Audi or Harley, rather than an old [Maruti] 800.”

Others, as Sakthivel describes them, have tastes that are an incongruous combination of the ordinary and the over-the-top. Like the safari-suited construction mogul who drove off in a Rolls-Royce Ghost, or the white veshti-clad director of a Chennai-based retail giant, who is continually expanding his collection of custom-made diamond-encrusted Montblanc pens.

Such men, when they appeared at the expo, provided everyone else an object lesson in the way that those leading the ‘CEO lifestyle’ were treated. A lengthy, enthusiastic conversation with the young man at the LavAzza stall would fetch the average non-CEO a polite but woefully caffeine-free response. But a hot cup of cappuccino instantly materialises when a large man in a silky sky-blue shirt and thick gold necklaces passes by, sweating under the adoring glare of a single cameraman’s video light. Another large man with a lustrous moustache and a dazzling array of gold chains gets a chorus of sunny greetings at the Audi stall and an equally rapturous welcome when he swings round the corner to the BMWs.

A tall, scowling man, with diamond studs and a leather briefcase, stands guard in front of the Rolls-Royce Ghost. “There are no clients,” he complains, “Just enthusiasts.” He breaks off to bark, “Don’t touch!” at a young woman who poses for a picture with her hand now hovering uncertainly above the lustrous white hood.

Meanwhile, a yacht dealer demonstrates an impressive array of attitudes, finely calibrated to status. A friendly man from Seychelles, who wants to bond over a possible seafaring connection, is treated with theatrical indifference. An angling enthusiast thinking of buying a basic sport-fishing boat gets firm, slightly mechanical information on various specifications. But the dealer  immediately warms up to a young man with a superior, distracted air, who talks of planning a golf township for a luxury real estate project stretching across “a couple of villages”. When the young man mentions a 200-acre lake, and declares, “The best way to utilise that is to make water sports,” the dealer looks almost teary.

Going by the messages scrawled in the guestbook, many of the 3,000 visitors to the show share this tearful vicarious—or hopeful—joy. ‘Hope all of us become richer (millionaire) overnight!’ goes one message. Another wistfully observes, ‘Two hours out of [the] world. Just like that, we are in heaven.’