Menstruation Rebels: Let There Be Blood

Humour, hashtags and hygiene are the new tools in the fight against menstrual taboos 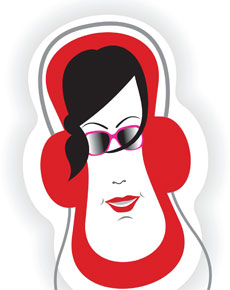 Twenty-year old Nikita Dutt had never heard of the Sabarimala temple in Kerala. Not until she read about the comments made by the current president of the Travancore Devaswom Board that manages the temple, which is dedicated to Lord Ayyappa and gets about one million pilgrims every year, making it one of the world’s most popular. Ahead of the Mandalapuja (when the temple is open to devotees for worship), Prayar Gopalakrishnan, who recently took over as president of the board, justified keeping menstruating women out of the shrine and said that women would be allowed in only after the invention of purity sensing devices. Since the temple is dedicated to Lord Ayyappa, who was believed to be celibate, women between the reproductive ages of 10 and 50 years are not allowed in the temple. When asked if the ban would ever be lifted, Gopalakrishnan reportedly said: “These days, there are machines that can scan bodies and check for weapons. There will be a day when a machine is invented to scan if it is the ‘right time’ for a woman to enter the temple. When that machine is invented, we will talk about letting women inside.”

Growing up in Patiala, Dutt, who likes to call herself ‘Nikita Azad’ and is a second-year student of Government College for Girls in Patiala, was not unfamiliar with the taboos around menstruation. “We were often asked by our teachers to step out if we were menstruating during a havan in school,” she says. “At that time, it seemed pretty much normal because it was done routinely, but as one grew older, it just seemed unfair,” she adds. When she read about Gopalakrishnan’s comments, she could only feel angry. “I just found myself simmering with anger and frustration over that flippant comment,” she says.

After discussing it with friends and classmates, Dutt decided to launch a counter campaign on platforms like Change.org, Facebook and Twitter with the hashtag #happytobleed. The campaign soon turned viral, receiving several comments on social media, such as ‘We are #happytobleed each month and if we didn’t, you wouldn’t exist!’ and ‘As a menstruator (sic) & a woman, menstruation without stigma & taboo is my right! I’m #HappyToBleed’. Since #happytobleed was launched on 21 November, women have also been posting photographs of themselves holding signs and sanitary napkins declaring they are ‘#happytobleed’ in red across social media. The hashtag, Dutt says, is a satirical attempt at highlighting the pain and inconvenience that women often face on account of a biological process.

Dutt is currently preparing to send a petition to the National Commission for Women, asking it to take up the cause of fighting the taboos nationally. “We need to take up menstruation and hygiene as a cause for women’s health and not sweep it under the carpet as ‘women’s problems’,” says Dutt.

Menstruation, as biology textbooks explain, is the periodic discharge of blood and tissue from the inner lining of a women’s uterus through the vagina. Every month, one of the two ovaries of a sexually mature woman releases an egg cell towards the uterus through the connecting fallopian tube. The uterus, in turn, prepares for pregnancy by developing a uterine lining which is made up of tissue and blood. If the egg remains unfertilised, the uterus sheds this lining, which exits through the vagina as a mixture of blood and tissue. This is called a menstrual period.

Over centuries, menstruation has come with its own baggage of taboos. While menstruating women have often been tagged as ‘impure’, ‘dirty’ and even ‘dangerous’ across cultures, they have also been subjected to extreme measures of isolation and restrictions. The biggest taboo is against talking about menstruation at all. Recently, the New York City Metropolitan Transport Authority objected to some artfully done advertising for underwear meant to be worn during periods to be displayed in the New York subway as ‘too suggestive’. In India, women are often not allowed to enter kitchens, religious shrines or even touch other male members of the family while menstruating. Common myths that they could contaminate food items with a mere touch are prevalent in some parts of the country even today.

According to Aditi Gupta, co-founder of Menstrupedia, a comic book and guide to periods for young girls that aims to dispel such myths, social stereotypes stem from a lack of scientific understanding, worsened by the silence on the subject in the public realm. There is also no relation between menstruation and religion. “Seclusion happened historically as a measure of maintaining hygiene since women did not have proper facilities. These practices have no relevance today,” she says, adding that there are several religions like Sikhism and Christianity whose followers do not consider it ‘dirty’ at all. According to Gupta, the problem arises when society starts telling adolescent girls that periods are something impure. This instils feelings of guilt and shame about the female anatomy and body. “If a girl or a woman can’t even talk about her natural biological process with dignity, how can we expect her to ever raise her voice against any violation she faces?” asks Gupta. The answer, she says, is to talk about periods. “There has been some improvement over the years with parents taking a keen interest in their girls, but a lot still has to be done.”

A breakthrough in the effort to transform the conversation on periods was the ‘Touch the Pickle’ advertising campaign for Whisper sanitary napkins. An active teenage girl who flouts all the rules meant to be observed during periods— running, wearing white pants, and so on—touches a jar of pickle and proudly proclaims, “I touched the pickle jar”, as other women applaud. Urges the voice- over: “Girls, let’s make the taboos go away and touch the pickle jar.” A far cry from the ‘Un dino mein’ and ‘Kaise kahoon’ advertising campaign that had actress Renuka Shahane hesitantly introduce a sanitary napkin on television, the new ad directly addresses the issue. “Sanitary pad advertising in India has always been very silly and mindless. This campaign stepped away from that, used the clichés and poked fun at them,” says a spokesperson of BBDO India, the ad agency that created the commercial. The campaign went viral with more than 2.9 million women pledging to ‘touch the pickle jar’ on social media, and it also won a Cannes award last year.

About five years ago, as part of a project to encourage girls to attend school in rural Gujarat, Vadodra-based activist Swati Bedekar discovered that girls were dropping out of school because of a lack of proper facilities and taboos around menstruation. In an effort to address menstrual hygiene in schools, she embarked on a project to make low-cost disposable sanitary napkins through self-help groups of women called ‘sakhis’ as most girls would use rags for their periods.

“We soon discovered that the problem wasn’t solved as they did not know how to dispose the napkins. They couldn’t dispose of them in the open and would go back to using rags which would be stored and hidden in damp and dark corners,” she says. Her husband Shyam Sunder Bedekar then invented a simple, cheap and eco-friendly machine to allow women to burn their used sanitary napkins. Ironically called the Ashudhinashak (‘destroyer of impurity’), the machine was developed to facilitate some form of hygiene and encourage mobility and conversations, says Bedekar.

“The problem is a lack of discussion and misconceptions. I myself popped in a few hormone pills as a teenager so that I could participate in a puja at home. My friend introduced it to me and I consumed it without thinking that it could have jeopardised my health,” she says, adding that the sale of hormone-inducing pills always goes up during the festival and puja season in rural Maharashtra and Gujarat. “Even a local paanwalla keeps them for sale,” she says. Bedekar emphasises the importance of the role of parents and husbands in confronting social taboos around periods. She herself seemed to have had her ‘touch the pickle’ moment when her mother came to know about her popping pills. “She made me sit through a puja while I was menstruating. It took me a long time to finally believe that nothing would go wrong. It was just a period,” she recounts.

Bedekar has now started a WhatsApp campaign with men, educating them about menstruation, as they are the main providers of most families in rural areas. “There is no budget allocation for sanitary napkins because husbands never talk about it with their wives. Many women buy napkins from the money they receive as gifts from their family,” she says.

Bedekar is also carrying out a campaign in which ten menstruating women are taken to a temple in every village. “But statements like these [such as the one made by Gopalakrishnan] set us two steps behind,” she adds.

While the #happytobleed campaign addresses the issue of menstrual taboos with a degree of defiance and aggression, another social media video posted by Buzzfeed. com takes it on with gentle humour. The video, posted by the website following the #happytobleed campaign, has three boys handling a sanitary pad and eventually wearing it, of course helped by their friends and girl friends. “None of us had ever seen or even touched a sanitary napkin before,” says 23-year-old Sumedh Natu, one of the actors who featured in the video and the producer of Buzzfeed (videos).

For Natu and his other friends, the video was a way of educating themselves as well. “As educated and fairly well-aware individuals, none of us knew that a sanitary napkin was worn over a garment and that our own friends (featured in the video) had been through crazy rules like not touching their family members,” he adds.

While the video is gaining popularity, Natu feels that humour is but one way of addressing such issues. “I think we don’t discuss periods openly because even women are part of the problem—they are too embarrassed to discuss it,” he says. “If my mother had told me about menstruation, I would have known about it. Tomorrow, if my daughter asks me for help, I should be able to help and answer her questions without looking up to my partner for help,” says Natu.